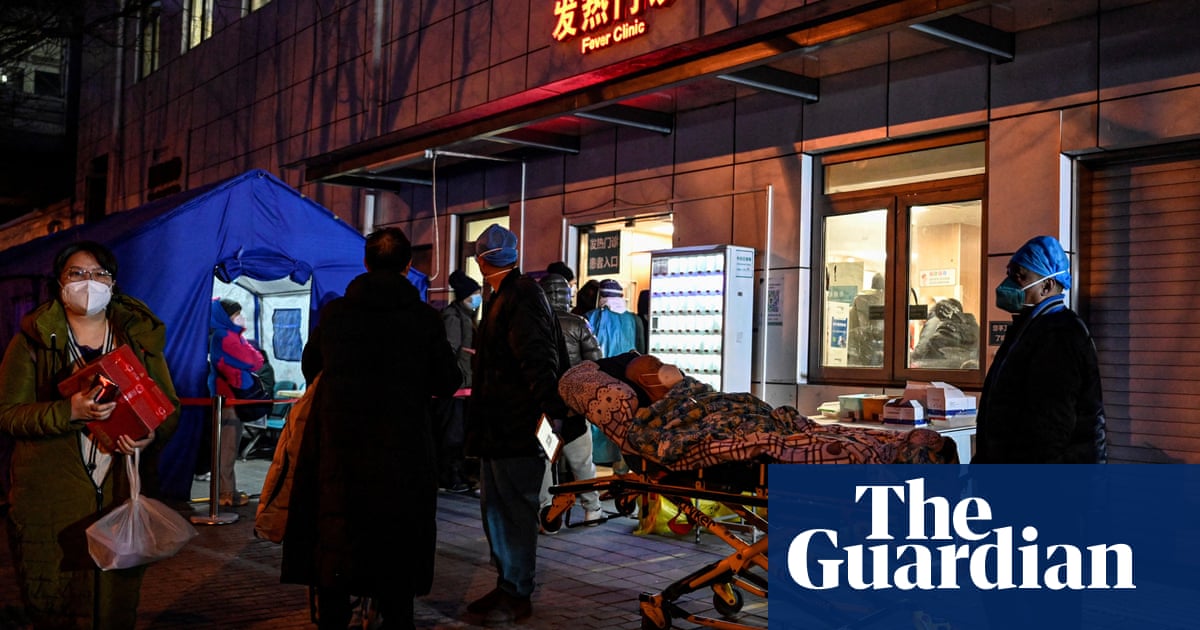 China may be struggling to keep a tally of Covid-19 infections as it experiences a big spike in cases, a senior World Health Organization official has said, amid concerns about a lack of data from the country.

Official figures from China have become an unreliable guide after the country of 1.4 billion people this month began dismantling its unpopular zero-Covid lockdown and testing regime.

The abrupt change caught a fragile health system unprepared, with hospitals scrambling for beds and blood, pharmacies for drugs and authorities racing to build special clinics. Experts say China could face more than a million Covid deaths next year.

“In China, what’s been reported is relatively low numbers of cases in ICUs, but anecdotally ICUs are filling up,” said Mike Ryan, the WHO emergencies director.

“I wouldn’t like to say that China is actively not telling us what’s going on. I think they’re behind the curve.”

The WHO said it was ready to work with China to improve the way the country collects data around critical factors such as hospitalisation and death.

Dozens of hearses queued outside a Beijing crematorium on Wednesday, even as China reported no new Covid deaths in its growing outbreak, sparking criticism of its virus accounting as the capital braces for a surge in cases.

A Reuters witness said they saw a heavy police presence and about 40 hearses queueing to enter while the parking lot was full outside a crematorium in Beijing’s Tongzhou district.

Inside, family and friends, many wearing traditional white clothing and headbands of mourning, gathered around about 20 coffins awaiting cremation. Staff wore hazmat suits and smoke rose from five of the 15 furnaces. It was not possible to verify whether the deaths were caused by Covid.

Workers at two different funeral parlours in Beijing told Reuters there had been a surge in residents looking to cremate deceased relatives over the weekend, leading to queues and delays.

One worker at the large Babaoshan funeral parlour in western Beijing advertised customers could skip the long queueing and registration process – for a 26,000 yuan ($3,730) fee.

“For whole of Beijing, speedy arrangement of hearses, no queue for cremation,” the worker said in a promotion for the service on the popular short video app Douyin.

“The WHO is very concerned over the evolving situation in China, with increasing reports of severe disease,” he said.

Speaking in Geneva on Wednesday, Ryan said the surge of cases in China was not exclusively due to the lifting of restrictive policies but also the lagging vaccination rate.

He said vaccination booster shot uptake rates among people in China over the age of 60 and most at risk of severe disease lagged behind many other countries and that the efficacy of the Chinese-made vaccines was about 50%.

He noted that there had been a surge in vaccination rates in China over the last weeks, adding that it remained to be seen whether enough vaccinations could be done in the coming weeks to stave of the impact of an Omicron wave.

“That’s just not adequate protection in a population as large as China, with so many vulnerable people,” Ryan said.

“Vaccination is the exit strategy from Omicron,” he added while noting that China had dramatically increased its capacity to vaccinate people in recent weeks.

Wang Guangfa, a respiratory specialist from Peking University First hospital, told the state-run Global Times newspaper that the death toll might rise sharply and predicted a spike in severe cases in Beijing over the coming weeks.

“We must act quickly and prepare fever clinics, emergency and severe treatment resources,” he said.

China has nine domestically developed Covid-19 vaccines approved for use, more than any other country, but they have not been updated to target the highly infectious Omicron variant.

Beijing has so far insisted on using only the domestically produced vaccines, which are not based on mRNA technology but older technologies.

Berlin sent its first batch of BioNTech Covid vaccines to China to be administered initially to German expatriates, a German government spokesperson said on Wednesday, the first foreign coronavirus vaccine to be delivered to the country.

No details were available on the timing and size of the delivery, although the spokesperson said Berlin is pushing for foreigners other than German nationals to be allowed access the shot if they want it.

In a letter to be sent to German citizens in mainland China, the government said it would offer basic immunisations and booster shots of vaccines approved for use in the European Union for free to anyone over 12 years of age.

“We are working on the possibility that besides Germans also other foreigners can be vaccinated with BioNTech,” the spokesperson told journalists in Berlin.

Reuters and the Associated Press contributed to this report