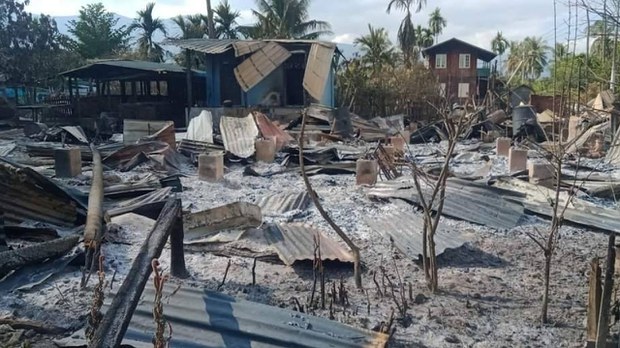 The body of a man was discovered in a burned-out house by returning locals who abandoned their homes before a two-day raid on their village in Myanmar’s Sagaing region.

Residents of Nan Chaung village in Kale township identified him as 50-year-old Byat Za Lain and said he was unable to leave because of leg problems.

“He was left behind when everyone fled. I thought that nothing could have happened to him but only his charred body was found when the junta troops left,” said a resident who didn’t want to be named for safety reasons.

He said the body was so badly burned it was impossible to tell whether Byat Za Lain died in the blaze, or whether troops shot him and set fire to his body.

Nan Chaung has around 400 houses and almost 2,000 residents according to township authorities. Locals said most people fled their homes as a column of 70 soldiers descended on the village and occupied it on Monday and Tuesday. They discovered Byat Za Lain’s body when they returned on Wednesday.

RFA phoned the junta spokesman and social affairs minister for Sagaing region, Aye Hlaing, to seek comment on the attack but the calls went answered.

Junta chief Senior Gen. Min Aung Hlaing has often denied his troops burn houses and repeated the claim during a meeting with the U.N. Special Envoy to Myanmar Noeleen Heyzer.

A total of 27,496 homes in Sagaing region were burned down by junta troops in the 22 months following the Feb. 1, 2021 military coup, according to a Dec. 10 report by Data for Myanmar, which compiles figures from a variety of online sources.