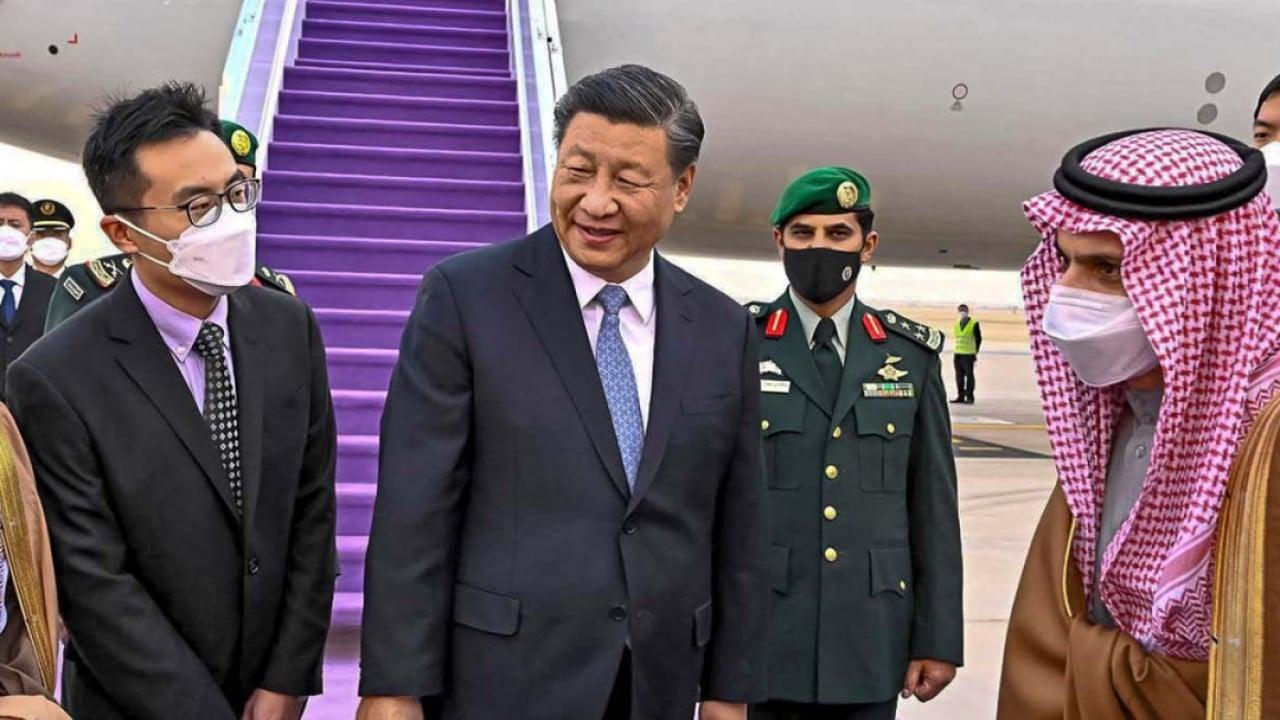 China’s ambassador to Iran, Chang Hua, was summoned by the Iranian government after the summit to hear its side of the islands dispute, and Iranian cabinet official Mohammad Jamshidi directly addressed his “Chinese colleagues” in a tweet that said: “When Saudi Arabia and America supported Isis and al-Qaeda terrorist groups in Syria and destroyed Yemen with brutal military aggression, it was Iran that fought the terrorists to establish stability and security in the region.”

Vice-Premier Hu Chunhua visited both Iran and the UAE this week. In a meeting with Hu on Tuesday, Iranian President Ebrahim Raisi also expressed his dissatisfaction, demanding “compensation” for China’s positions at last week’s summits, which had caused “complaints of the nation”, the Iranian government said.

The Chinese side said Hu expressed China’s “firm support” to Iran’s safeguarding of its sovereignty, and foreign ministry spokesman Wang Wenbin said China’s relations with both Iran and the Gulf countries did not target any “third party”.

Despite its displeasure over the China-GCC joint statement, Iran and China, its largest trading partner, remain committed to developing bilateral relations under a 25-year cooperation programme signed last year that will define future political, economic and security cooperation. Sixteen new memorandums of understanding were added to the cooperation road map, with additional economic cooperation to be discussed at Xi and Raisi’s next meeting, which is being arranged.

Observers said China’s relations with countries in the Middle East had been strengthened on multiple fronts at the summits in Saudi Arabia. And as Beijing continued to strengthen its foothold in the region it would inevitably weigh in on regional affairs. But it would maintain its balance among regional rivalries and choose not to get involved in complex conflicts.

Guy Burton, an adjunct professor at Brussels School of Governance in Belgium who specialises in Middle East affairs, said Hu’s visit aimed to ensure all key Gulf countries were covered after last week’s summits, which UAE President Sheikh Mohamed bin Zayed Al Nahyan did not attend and where multiple issues related to Iran were discussed

“Chinese always try to balance anything they do with one side by undertaking a visit or agreeing to do something with the other soon after,” he said.

Gökhan Ereli, coordinator of Gulf studies at the Centre for Middle Eastern Strategic Studies in Turkey, said China’s stance on the disputed islands did not aim to “blame or point fingers at any country”, and Iran’s reaction to the China-GCC statement was probably because an issue it saw as an internal affair had become “internationalised”. He said he did not expect Iran’s relations with China to deteriorate as Beijing got closer to Saudi Arabia and the UAE.

But Yin Gang, a researcher at the Chinese Academy of Social Sciences’ Institute of West Asian and African Studies, said there would be some impact on bilateral relations because Iran might feel targeted after an issue it deemed a “principal interest” was discussed in its absence.

“China has not continued to maintain a balance this time,” he said. “The key is that the China-Gulf summit is about cooperation between China and these countries, not about resolving regional conflicts. So I think it lacks consideration for China to accept such phrasing, and to sign it as a joint statement with the Gulf countries.”

Iran’s relations with Saudi Arabia have also been cold for decades. Riyadh has expressed concerns about Tehran’s nuclear programme and its missile technologies, which were allegedly provided to Iran-backed Houthi militants in Yemen, who are being fought by a Saudi-led coalition. While Saudi Arabia has been strengthening its defences to counter threats from Iran, US intelligence has claimed China is helping Riyadh develop its own ballistic missiles.

China’s relations with Saudi Arabia were strengthened during a summit meeting in Riyadh. They agreed to upgrade their ties to include the hosting of meetings between their heads of state every two years, and pledged cooperation in “all fields”, including on Iran’s nuclear programme.

Ereli said Gulf countries had started to consider China as “a political and security partner” as well as “a larger and more permanent economic and trade partner”.

“In an environment such as the Middle East, where political and military instability directly affects the security of states, nations, and regimes, countries like China need to be equally political and security partners,” to protect their investments in the region, he said.

In his speech at the Gulf summit, Xi pledged China’s support for creating a “collective security framework” to stabilise the region. He also vowed to build a “China-Arab community” with a shared future in a changing world, with increased communications and activities among security departments and personnel, including training 1,500 cyber police for Arab countries.

Xi also emphasised the importance of China’s economic relations with the Arab world. He said that over the past decade, bilateral trade had increased by US$100 billion; direct investment had increased by 2.6 times, reaching US$23 billion; and the Belt and Road Initiative had produced more than 200 projects in the Arab countries.

He also pushed for cooperation in new energy, technology, space and data, including a landmark deal with Saudi Arabia for Huawei to provide cloud computing services and a proposal to set up a China-Gulf moon and space exploration centre.

Burton said China had managed to achieve a level of economic exchange and “reasonably good” relations with countries in the region while avoiding getting involved in their conflicts, and he expected Beijing would continue along that path “as far” and “as long” as it could.

“Although the Chinese regularly express their support for peaceful solutions to regional conflicts, they don’t look to involve themselves as mediators or peace brokers as a rule,” he said.

“These conflicts are often deep-rooted and therefore difficult to resolve. They require substantial investments in time and effort to solve, and as the cases of Libya, Yemen and Syria have shown over the past decade, that hasn’t been easy to do.”

But China might eventually be unable to distance itself from some regional conflicts, he added, as situations on the ground might force China to step in as Chinese investments were put at risk.

China had tried to play a mediating role in some conflicts before, including on Palestine, Burton said, but the results had not been “brilliant”.

Xi proposed a four-point plan calling for a peaceful two-state solution for the Israel-Palestine conflict when he hosted Palestinian President Mahmoud Abbas and then-Israeli prime minister Benjamin Netanyahu – the first two Middle East leaders he met after becoming president – in separate meetings in 2013.

China has since coordinated a few peace talks between Israeli and Palestinian representatives but they have failed to yield substantial results. Many observers see limitations in China’s approach, which repeatedly advocates its four-point plan without taking on any further commitments.

And while it expresses support for Palestine on the international stage and has directed a large amount of humanitarian relief to it over the years, it maintains close economic ties with Israel. Chinese investments in Israel – including those in hi-tech fields – peaked in 2018 before facing increased scrutiny from the United States.

Victor Gao, vice-president of the Centre for China and Globalisation, a Beijing-based think tank, said Beijing believed conflicts between Middle East countries could be resolved within the region.

“China has developed a good bilateral relationship with Israel, and on the other hand, it has done its part to defend the legitimate interests of Palestine,” he said.

As the biggest purchaser of oil from the Middle East, China’s energy cooperation with the region still topped the agendas at last week’s summits. Xi also called for the first time in public for Gulf countries to make full use of the Shanghai Petroleum and Natural Gas Exchange to settle oil and gas trades in renminbi, a move seen as a challenge to the US dollar’s dominance in the region.

It is unclear how Xi’s proposal was received among Middle East countries, and it did not appear in the joint statement with Saudi Arabia. When he was asked about Xi’s proposal, Saudi Foreign Minister Prince Faisal bin Farhan said he had “nothing to add”.

P. S. Srinivas, a visiting research professor at the National University of Singapore’s East Asian Institute and a former lead financial economist at the World Bank, said the internationalisation of the renminbi remained a “work-in-progress” and it still had a “long way” to go in displacing the global dominance of the US dollar. He said Chinese currency accounted for less than 3 per cent of global foreign currency reserves, compared with nearly 60 per cent for the US dollar. The renminbi was used in about 2 per cent of global payments, against 42 per cent for the US dollar.

“For the foreseeable future, the US dollar will continue to remain the primary basis for pricing in the oil and gas trade,” he said. “President Xi’s statement on RMB settlement will not have any immediate major impacts on the Middle East. It is, however, likely to help continue the gradual process of greater international use of the RMB.”

The US has repeatedly warned countries in the Middle East to be mindful of China’s growing influence in the region, with US President Joe Biden saying it will not leave any regional vacuum to be exploited by Russia, China or Iran. During Xi’s trip last week, US National Security Council spokesman John Kirby said US policy towards the region was unchanged.

Burton said that while he did not think China had any interest in “replacing the US as the regional hegemon”, and Saudi Arabia was “unlikely to downgrade its alliance with the US”, Xi’s visit served both Beijing and Riyadh’s purposes “in reminding Washington and others that they are both important and significant actors who cannot be ignored or overlooked”.