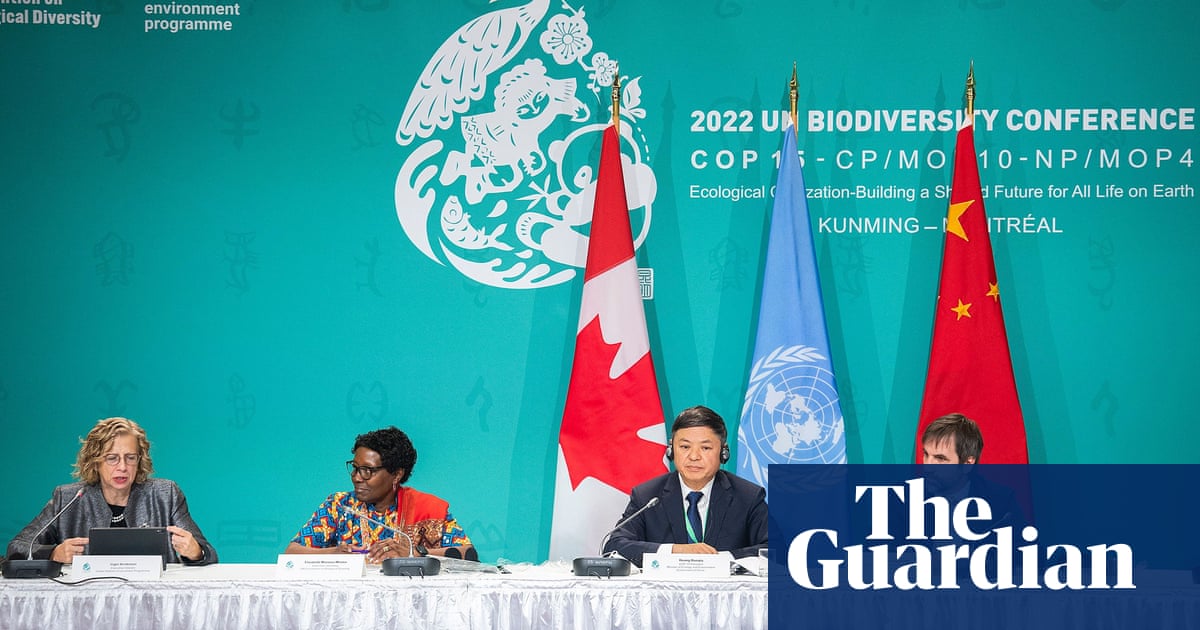 Conserving 30% of Earth for nature would be equivalent to the 1.5C climate target, Canada’s environment minister has said, as senior UN figures warn action on nature loss at Cop15 this month is key to helping solve the biodiversity and climate crises.

Steven Guilbeault, a former environmental activist who is now Canada’s climate minister, said that agreeing to conserve nearly a third of the planet by the end of the decade is a key aim for his country at the biodiversity summit, which is being held in Montreal over the next two weeks.

The target, known as “30×30”, is the most high-profile proposal under consideration by governments for this decade’s agreement to protect biodiversity. Led by the UK, Costa Rica and France, it has the backing of a coalition of more than 100 countries but faces significant concerns from some Indigenous peoples and human rights campaigners, who warn it could legitimise further land grabs and violence against communities shown to best protect nature.

“We’re a big country with big ambitions,” said Guilbeault. “We’ve committed as a country to protect 30% of land and waters by 2030. We’re working in full partnership with Indigenous peoples, as well as provinces and territories.

“One might argue, and I guess I am, that our 1.5 degrees is protecting 30% of lands and oceans by 2030. It is the biodiversity equivalent of the 1.5 degrees on climate change. And I think that’s one of our collective goals [for this summit].”

Guilbeault made the comments at the opening press conference of the biodiversity summit today, where he appeared alongside the Cop15 president and China’s environment minister, Huang Runqiu; the UN’s biodiversity head, Elizabeth Maruma Mrema; and Inger Andersen, the executive director of the UN environment programme.

Mrema and Andersen said the summit could have big consequences for tackling emissions from land, the second-largest human source of greenhouse gases after burning fossil fuels.

“If we look at the recent disasters – floods, drought, heatwaves, wildfires – yes, we always say it’s because of climate change,” said Mrema. “But where are these disasters that happen? They all happen in ecosystems. It is clear that unless we protect and restore biodiversity, climate warming will continue to rise. And we may fail to reach the 1.5 degrees.”

Ahead of formal negotiations for the agreement at Cop15, which begin tomorrow, talks received a significant boost from the EU as the bloc agreed a ban on all products judged to have contributed to deforestation. The world’s second-largest importer of agricultural product made the rules, which will affect the trade in cattle, cocoa, coffee, palm oil, rubber, soya and wood products, all linked to the loss of tropical forests.

“This legislation is a gamechanger for the world’s forests,” said the Mighty Earth CEO Glenn Hurowitz. “For the first time, European governments are telling companies selling agricultural goods, ‘If you or your suppliers destroy forests, you can’t sell your products here.’ With this law, Europe is putting real action for wildlife on the table.”

However, Hurowitz cautioned that there were gaps in the legislation, including a failure to protect Indigenous rights and other important non-forest ecosystems such as peatlands.

Talks in Canada are scheduled to conclude on 19 December but are likely to overrun, with significant divisions between governments already evident at pre-Cop negotiations, which took place over the weekend.

At the opening press conference on Tuesday, Huang Runqiu said China took its role in helping countries forge a final agreement seriously, noting that it had been a hard decision to move the talks from Kunming, China, due to the pandemic.