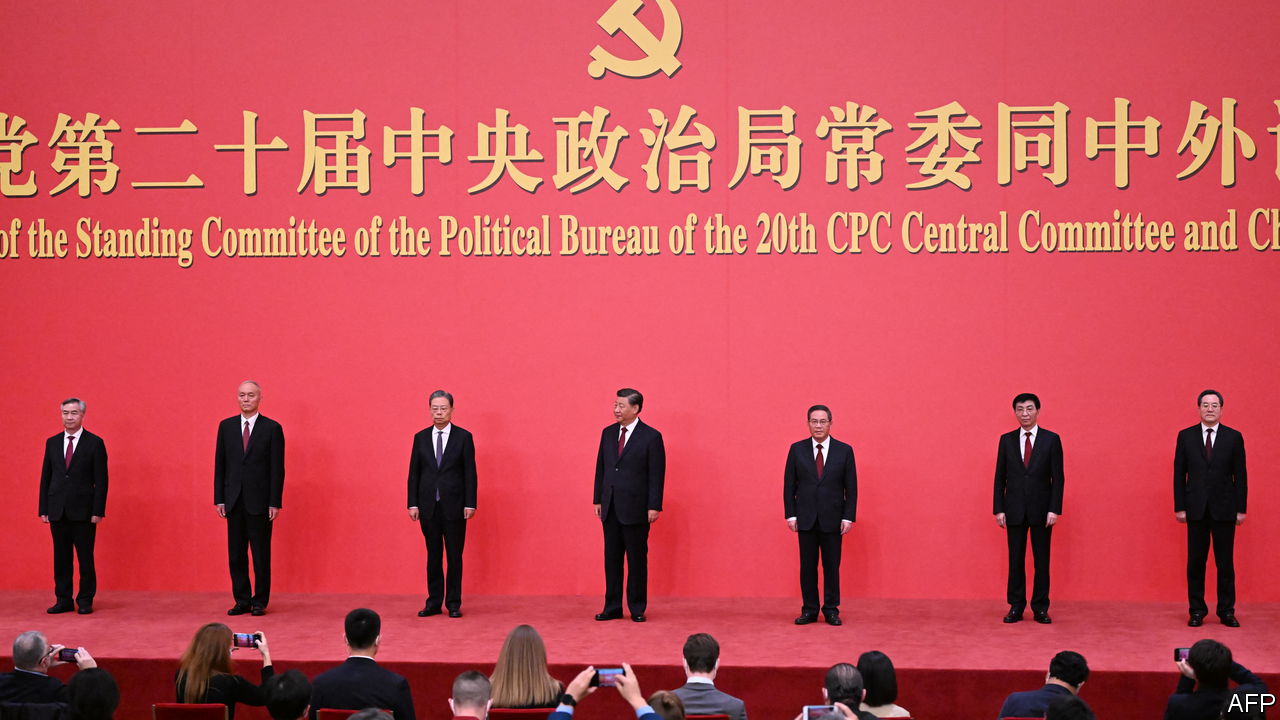 THE CHOREOGRAPHY of the Chinese Communist Party’s five-yearly congress has hardly changed in recent decades. It begins with the party chief delivering a stodgy, often impenetrable report to the 2,300 or so party delegates present. During the week these delegates echo their leader’s views and vote for a new Central Committee, a body comprising about 370 high-ranking officials, military commanders and other grandees. It all ends with a big reveal of the party’s apex decision-making body, the Politburo Standing Committee. All in all, it is a rather dull affair. This year, though, there was more drama than usual, including the mysterious exit of a former leader.

It was no surprise that Xi Jinping walked onto the stage first on October 23rd, leading the new seven-member Standing Committee. He had made it clear that he intended to break recent retirement norms and stay on as general secretary of the party and head of the armed forces. He was duly granted a third five-year term in both positions (he will additionally be re-confirmed as state president at next year’s annual session of the legislature, probably in March). The congress, in many ways, was a showcase of Mr Xi’s power.

With Mr Xi’s position not in doubt, all eyes were fixed on the six men who followed him. In the past the committee’s members had ties to different factions of the party, resulting in a collective style of decision-making. Those times are gone. Mr Xi dominated the previous standing committee. He all but owns this one.

Start with those who did not appear on stage. At 67, Li Keqiang, China’s prime minister, was just young enough to retain his seat on the Standing Committee. Long ago he was seen as a possible candidate for the jobs Mr Xi now holds. But he and Wang Yang (also 67), who was once seen as a possible successor to Mr Li, were removed from the committee. Two other members, Li Zhanshu and Han Zheng, who had reached the normal retirement age (68), were also removed. In their place, four men with ties to Mr Xi have been promoted.

The most notable of these is Li Qiang, the senior party official in Shanghai and a protégé of Mr Xi. He is expected to be appointed prime minister in March, despite not having served as deputy prime minister—a normal requirement for the job. Residents of Shanghai may see his promotion as an affront. Mr Li oversaw a shambolic months-long lockdown of the city earlier this year to suppress covid-19. Mr Xi, though, has reason to favour Mr Li: early this century, when Mr Xi was the party boss of Zhejiang province, Mr Li was his chief of staff. Mr Xi may also be grateful to Mr Li for standing firm during the covid outbreak in Shanghai. The president has been a vocal supporter of China’s tough “zero-covid” policy.

The other newcomers to the Standing Committee also have close ties with Mr Xi. One is Cai Qi, the party secretary of Beijing, who held several prominent jobs in Zhejiang when Mr Xi was in charge there. Another is Li Xi, the party boss of Guangdong, a wealthy southern province. His family is said to have ties with Mr Xi’s that date back decades. He now becomes the chief enforcer of party discipline. A third is Ding Xuexiang, Mr Xi’s chief of staff.

Mr Xi’s dominance has been built on the wreckage of norms that once appeared to govern the party. By taking a third term, he broke the expectation that party leaders would serve for a decade at most, as his most recent predecessor, Hu Jintao, did. None of the new Standing Committee members is considered a likely successor. It was also once thought that officials over the age of 67 would not take top leadership positions. That is no longer the case. Mr Xi is 69 and his new top general, Zhang Youxia, is 72.

Changes to the party’s charter, announced on the final day of the congress, also enhanced Mr Xi’s authority. These included new demands on party members to protect Mr Xi’s position at the “core” of the party’s leadership. He is now described only in the most grandiose terms. According to a resolution approved by the congress, the elevation of Mr Xi has “set the rejuvenation of the Chinese nation on an irreversible historical course.”

The exit seen round the world

But the most dramatic moment of the congress came during its closing session, when a frail-looking Hu Jintao was escorted out of the event. Mr Hu, who had been sitting next to Mr Xi, appeared confused and reluctant to leave as he was helped out of his chair by two officials. Other leaders sat stone-faced as he was guided towards an exit. Hours later Chinese state media reported that Mr Hu, who is 79, had been unwell.

Observers are divided over whether Mr Hu’s exit had any connection with politics. But, even if only health-related, his departure had an unintended symbolism: the congress has swept aside politicians linked to Mr Xi’s predecessors (including Hu Chunhua, who lost his seat on the Politburo). Mr Xi is now surrounded by his own men. His grip on power has never been tighter.■