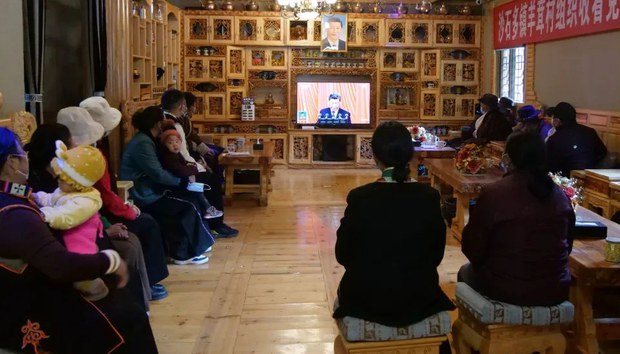 Chinese authorities are ordering residents of Tibet’s regional capital Lhasa to tune in to television coverage of China’s 20th Communist Party Congress, forbidding them to leave their homes until the sessions end, RFA has learned.

Monasteries and schools in Tibetan areas of western Chinese provinces have also been instructed to watch the week-long proceedings, which opened in Beijing on Sunday, Tibetan sources say.

Tibetan residents of Lhasa are now confined to their homes so they can pay close attention to speeches given by China’s President Xi Jinping and other top leaders, a source living in Tibet told RFA.

“A few days ahead of the meeting, one person from each family was allowed to go out to pick up groceries and other essentials, but now no one is allowed to leave their home,” RFA’s source said, speaking on condition of anonymity for security reasons.

Buddhist monks in the Ngaba (in Chinese, Aba), Kardze (Ganzi), and Golog (Guoluo) Tibetan Autonomous Prefectures in Sichuan and Qinghai are meanwhile under orders to watch the Congress, another Tibetan source said, writing to RFA.

“All the schools in the Ngaba, Khyungchu [Hongyuan], and Dzamthang [Rangtang] region have also been instructed to watch the Party Congress meetings from the beginning,” the source said, also asking not to be named.

“This is why they’re being forced to stay indoors,” Lekshey said. “The Chinese government regards ‘Tibet’ as a very sensitive issue, but these tactics will never succeed until the status of Tibet is resolved.”

Formerly an independent nation, Tibet was invaded and incorporated into China by force more than 70 years ago, following which Tibetan spiritual leader the Dalai Lama and thousands of his followers fled into exile in India and other countries around the world.

Beijing has accused the Dalai Lama of fomenting separatism in Tibet.

Chinese President Xi Jinping, 69, is widely expected to be endorsed by Party Congress delegates this week for a third term in office, breaking recent party norms and becoming China’s most powerful ruler since Mao Zedong.

Translated by Tenzin Dickyi for RFA Tibetan. Written in English by Richard Finney.