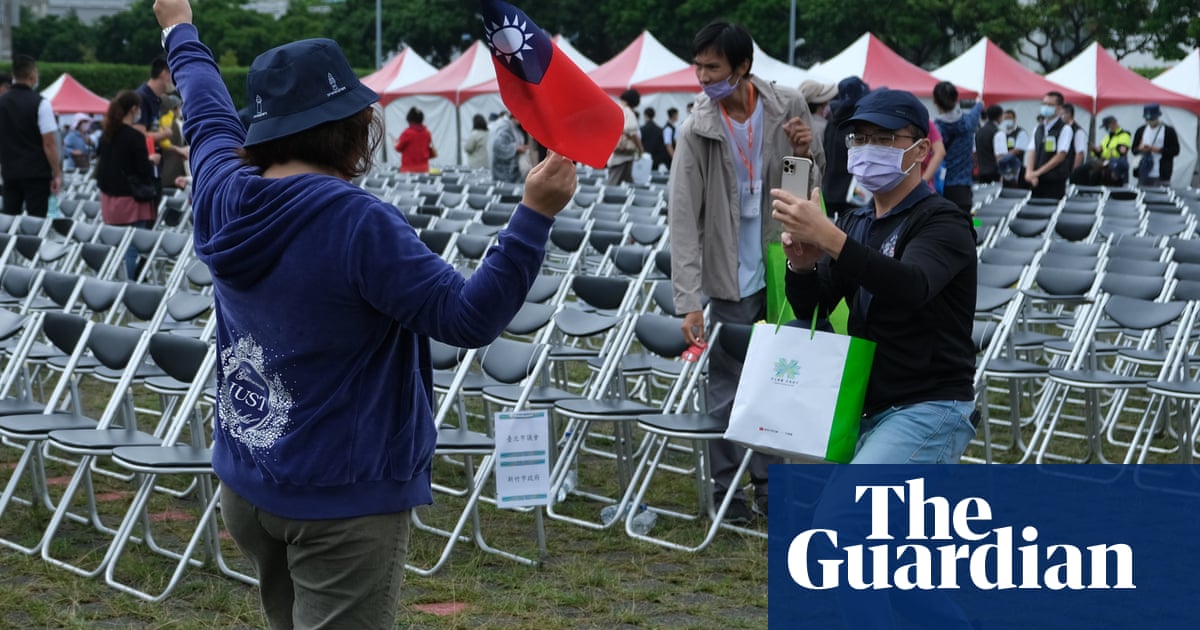 Taiwan’s president has called for domestic political unity to combat Chinese disinformation and cyberwarfare destabilising society ahead of next month’s local elections.

Addressing crowds at Taiwan’s de facto national day on Monday, Tsai Ing-wen said Taiwan had to grow its resilience and international standing in the face of China’s growing authoritarianism. She warned Beijing that Taiwan would not give up its democracy or sovereignty, but she remained willing to restart communications – which China cut off after her election in 2016.

“Only by respecting the commitment of the Taiwanese people to our sovereignty, democracy, and freedom can there be a foundation for resuming constructive interaction across the Taiwan Strait,” Tsai said.

Beijing has sworn to annex Taiwan, which it claims is a province of China, and its threats have increased in recent years. As well as increased military action towards Taiwan, China has also been accused of waging cyberwarfare.

Chinese disinformation efforts often increase during Taiwanese election periods, and local elections, scheduled for late November, are often seen as a precursor to presidential elections which follow about a year later.

“Taiwan is one of the countries most targeted by information warfare, a non-traditional security threat that persistently interferes with the functioning of our democratic system,” said Tsai.

Differences and debate were welcome “but we should unanimously and resolutely stand behind our free and democratic system, no matter how much external pressure we face”.

Tsai pledged to improve transparency and anti-disinformation work to combat foreign infiltration and sabotage, citing the daily pandemic briefings as an example which informed the public and reduced panic and misinformation.

In her speech Tsai compared China’s “bullying” of its neighbour and its expansion into the south and east China seas to Russia’s invasion of Ukraine.

“We absolutely cannot ignore the challenge that these military expansions pose to the free and democratic world order … The destruction of Taiwan’s democracy and freedom would be a grave defeat for the world’s democracies,” she said, praising local Taiwanese’ enthusiasm for civilian defence training. She said it was the best example of being “all in this together”.

Chinese officials have said that Taiwanese people would be subjected to “re-education” after invasion, and that pro-independence advocates would be punished under Chinese law.

Tsai also sought to reassure the international community that the tensions were not a threat to the global semiconductor supply – the majority of which comes from Taiwan.

“The concentration of the semiconductor sector in Taiwan is not a risk, but is the key to the reorganisation of the global semiconductor industry,” she said, pledging to help “optimise” a worldwide restructuring of the chip supply chain with Taiwan firms playing a prominent role.

10 October, or Double Ten day, officially commemorates the start of the Wuchang Uprising in 1911, which ultimately led to the establishment of the Republic of China, Taiwan’s official name. After the Chinese civil war the ROC government fled to the island of Taiwan and established a government in exile there. Double Ten day is still celebrated in Taiwan more recently as a de facto national celebration.

A few thousand spectators were granted access to the highly securitised event area via a lottery, sitting opposite the president and hundreds of dignitaries.

Johnny Hsiao had attended both. He told the Guardian he felt pleasure at both, but things had changed. “Taiwan strait is more in conflict now, and opinions are more divided,” he said.

“I think the status is a little nervous … but we think it’s safe,” Hsiao said. “I think it’s part of the DPP government’s strategy to make Taiwan people think about independence. Most Taiwan people, including me, want to keep it stable and nobody wants to have any war between China and Taiwan.”

This year’s formal celebrations were smaller scale than in 2021, which was a display of military might including the parading of missiles and other heavy artillery. Instead it focused on bilateral friendships, with personal thanks to the visiting president of Palau, which is one of just 14 governments which recognise Taiwan. It also heavily featured Japanese connections. Japan switched recognition to China 50 years ago, but is culturally, politically, and strategically close to Taiwan, particularly as China grows more aggressive.

In her speech, Tsai also noted that Taiwan will fully reopen its borders on Wednesday, for the first time since the pandemic began in January 2020. Taiwan ran one of the strictest and most successful pandemic responses of the pandemic, but had been slow to reopen to international visitors despite having tens of thousands of local cases a day.

“I’m happy about this, it’s been a long time since we went abroad or foreigners came to Taiwan,” said Hsiao. “We welcome any visitors from the world.”