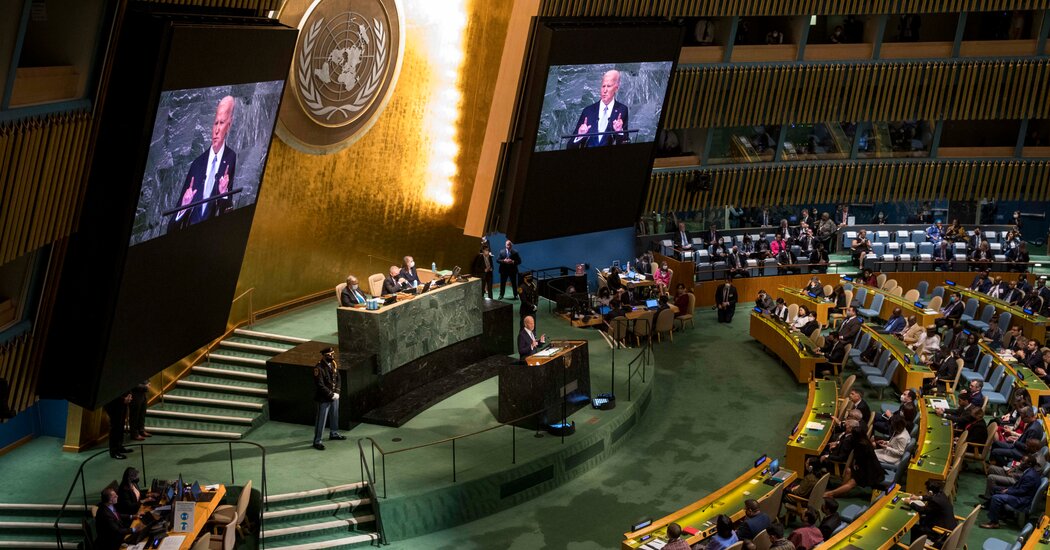 In his speech to the United Nations General Assembly on Wednesday, President Biden criticized the governments of Iran and China for their human rights records, while vowing that the United States would always stand up for those rights.

Alluding to the protests that have erupted in Iran over the death in custody of Mahsa Amini, a 22-year-old woman who was arrested by the country’s morality police last week allegedly for violating dress codes, Mr. Biden said the United States stood with “the brave citizens and brave women of Iran, who right now are demonstrating to secure their basic rights.”

And with talks stalled on restoring the 2015 Iran nuclear deal, which President Donald J. Trump abandoned, Mr. Biden implicitly threatened to use force if necessary to prevent Iran from developing nuclear weapons, but said that he wanted to prevent conflict.

“We will not allow Iran to acquire a nuclear weapon,” Mr. Biden said, adding, “I continue to believe diplomacy is the best way to achieve this outcome.”

Earlier on Wednesday, Iran’s president, Ebrahim Raisi, made his debut before the General Assembly, speaking in defiant terms that offered little hope of a fresh diplomatic breakthrough.

He criticized Israel as “an occupying savage power”; held up a picture of the former commander of Iran’s powerful Revolutionary Guards Corps, Maj. Gen. Qassim Suleimani, who was assassinated by the United States in Iraq; and, alluding to the nuclear deal, said Iran wanted to obtain what is “fair and just” for itself.

The Biden administration views Iran as its greatest challenge in the Middle East, but Mr. Biden has signaled that he hopes to expend less diplomatic and military resources in the region in order to focus on China and Russia.

Mr. Biden mentioned China several times in his speech, first when he said that nations must respect “freedom of navigation.” American officials use that phrase to frame the threat that China’s military activities pose in the Asia-Pacific region. U.S. officials have been alarmed by the expansion of China’s military footprint in the South and East China Seas, by the activities of the Chinese Navy and Air Force around Taiwan and by the growing Chinese security presence in the Pacific.

China’s People’s Liberation Army fired missiles over Taiwan last month after the U.S. House speaker, Nancy Pelosi, visited the self-governing island, which China claims as its own. Several missiles landed in waters near Japan. China also had its navy carry out exercises in nearby waters.

He said the United States would not ask other nations to choose between itself and a competitor, but asserted that Washington “will be unabashed in promoting” a vision of a free world.

Mr. Biden also said that the United States remained “committed to the One China policy,” which acknowledges China’s position on Taiwan but does not endorse it. But Mr. Biden also told CBS’ “60 Minutes” on Sunday that while Taiwan makes its “own judgments” about independence, American troops would defend Taiwan in the event of an “unprecedented attack” by China.

Drilling down on his critique that Russia and China are undermining a global order based on widely agreed upon rules, Mr. Biden called for reforms to the U.N. charter, including making the Security Council “more inclusive” by expanding its permanent membership, which is now made up of Britain, China, France, Russia and the United States. American officials have supported the idea of adding Germany, India and Japan to the Council.

Moscow and Beijing have often vetoed resolutions supported by the Council’s three other permanent members and much of the international community. Mr. Biden said in his speech that nations should refrain from Security Council vetoes “except in rare extraordinary situations to ensure the council remains credible and effective.”