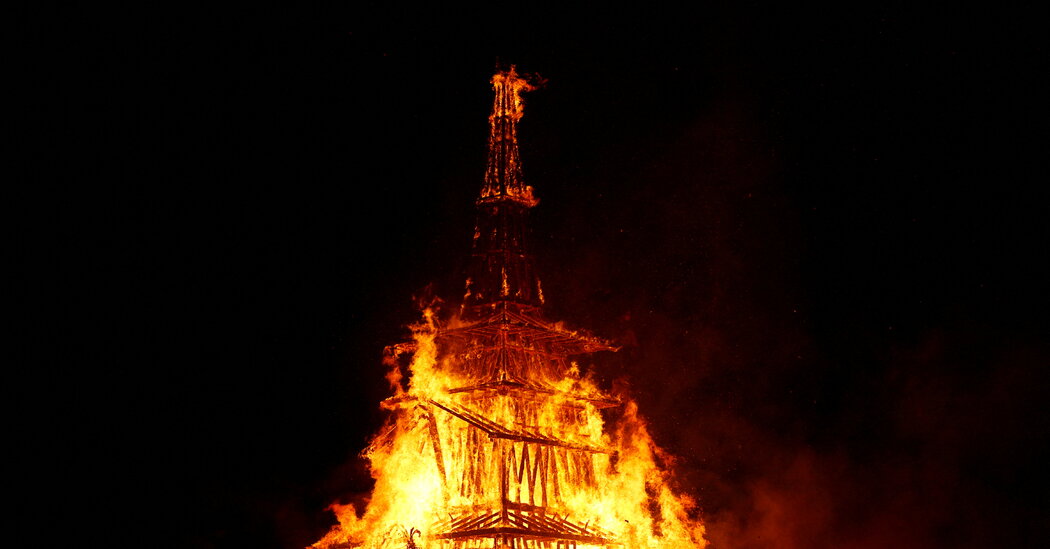 LONDON — Piece by piece, the Covid-19 sanctuary was born on a hilltop in the town of Bedworth in central England. The process was meant to be a metaphor for a human life. Like bones fused over time, it grew taller as the memorial’s creators spent months joining intricate pieces of wood into a skeletal structure that finally stood on its own, 65 feet high.

Then they burned it all down.

There have always been monuments to commemorate the loss of life from calamitous events, such as the thousands of memorials dedicated to world wars, the Sept. 11 attacks, the Holocaust.

But the Covid-19 pandemic, now in its third year, has presented a unique challenge for grieving families. It is not a singular event, in one location. As the death toll of more than six million worldwide continues to rise, communities and families are trying to keep up, building memorials as the tragedy is still unfolding, its end not yet written.

New monuments are being installed. Old projects are expanding. Photographs and biographies of Covid-19 victims in Malaysia and South Africa are updated online. Landscapes in villages and cities are transformed by remembrance, from a waist-high structure in Rajannapet, India, to spinning pinwheels fixed along a walkway in São Paulo, Brazil.

Names are painted on a wall along the River Thames in London and on rocks arrayed in hearts on a farm in New Jersey. Thousands of fluttering flags were planted at the Rhode Island State House. Ribbons are tied to a church fence in South Africa.

“People died alone in hospitals, or their loved ones could not even see them or hold their hands, so maybe some of these memorials have to do with a better send-off,” said Erika Doss, a University of Notre Dame professor who studies how Americans use memorials.

“We really do need to remember, and we need to do it now,” Dr. Doss said. “Covid isn’t over. These are kind of odd memorials in that names are being added. They are kind of fluid. They are timeless.”

It is not easy for the builders of these memorials to capture death. It is elusive and vast, like the airborne virus that claimed lives and left the question of how to make a physical manifestation out of a void.

For the builders of the sanctuary in Bedworth, a former coal mining town, the answer was to turn away from their communal artistry of nearly 1,000 carvings of pine and birch arches, spires and cornices, and to reduce it to ash at sunset on May 28.

What the moment needed, one organizer said, was an event of catharsis and rebirth, in which people who had seen the sanctuary standing can now go back and see it gone.

“It will still be there in their mind,” Helen Marriage, a producer of the project, said. “Feel the emptiness, which is the same way you feel with this dead, loved person.”

Over a year after it started, new names are still being added to the thousands scrawled on hearts painted on a wall along the River Thames in London.

Read More on the Coronavirus Pandemic

A walk along its nearly half-mile stretch shows how death gutted generations and left few countries untouched. Arabic, Portuguese, Spanish and Urdu are among the languages in messages to “Grandpa,” “Mum,” “Daddy,” “Nana.”

Their authors tried to understand death. “Angel wings gained too soon” was how someone described Sandra Otter’s death on Jan. 30, 2021. “Keep on Rocking” was the message to Big Pete.

The virus claimed neighbors, comedians and drinking buddies, their stories told in marker on the wall. Dr. Sanjay Wadhawan “gave his life saving others.” Cookie is “still remembered at the post office.” To all London “cabbies, RIP.”

Some tried to make sense of loss. Angela Powell was “not just a number.” One person wrote, “This was murder,” and another said, “They failed them all.” A woman named Sonia addressed Jemal Hussein: “Sorry you died alone.”

The wall’s founders were citizens and activists, who started painting the empty hearts last year toward the end of one of Britain’s lockdowns to represent the more than 150,000 people who had Covid-19 on their death certificates in Britain.

“We have no control over it,” said Fran Hall, a volunteer who regularly paints new hearts and covers up any abusive graffiti that appears.

“We could be painting one section, and people are adding hearts further down,” she said. “It is still happening. It is really organic.”

Dacia Viejo-Rose, who researches society’s use of memorials at the University of Cambridge, said the “coming out” of grief over Covid-19 was compelling because so many suffered in isolation.

People who are grieving will often seek solace at a memorial that is unrelated, she said.

One day in June, Du Chen, a student from China who is studying at Manchester University, knelt to write in Mandarin on one of the painted hearts in London, to “wish everybody well.”

“People are not just commemorating the people they have lost, but also the way of life before the pandemic,” he said.

A family of tourists from Spain paused, saying their people suffered, too. Alba Prego, 10, ran her fingers along photographs attached to a heart mourning a California man, Gerald Leon Washington, who died at 72 in March.

“The people who wrote that loved him very much,” she said.

With the death toll climbing, there will be more.

Space is also being found for remembrance on a fence at St. James Presbyterian Church in Bedfordview, a suburb on the edge of Johannesburg. In early 2020, caretakers began tying white satin ribbons on the fence for people who died of Covid-19.

In January 2021, the month with the highest average deaths in South Africa, the church said it would tie one ribbon for every 10 people who died.

More than 102,000 people have died from Covid-19 in South Africa, although the rate has slowed, the latest figures show. In early July, the fence had 46,200 ribbons tied to it, said the Rev. Gavin Lock.

Families “suffered huge trauma in not being able to visit loved ones in hospital, nor view the deceased, and in some cases not able to follow customary rites,” he said.

In Washington, D.C., more than 700,000 white flags, one for each person lost to Covid, were planted on 20 acres of federal land. From Sept. 17 through Oct. 3, 2021, mourners wandered through the rustling field, writing messages and names on the flags.

“I miss you every day, baby,” a woman whispered as she planted a flag, in a moment captured in a documentary published by The New York Times.

By May 12 this year, when the death toll in the United States reached one million, President Biden ordered flags to be flown at half-staff for four days at the White House and in public areas.

The white flags have kept going up.

Suzanne Brennan Firstenberg, the artist behind the installation, “In America: Remember,” said a memorial using new flags was being planned for New Mexico in October. In June, thousands were planted at the State House lawn in Providence, R.I., to commemorate the 3,000 people who died of Covid-19 there.

“What we are seeing is this push for handling it at the state and local level, because no one sees it happening at the national level,” Ms. Firstenberg said.

“The plane is still crashing,” she said. “And it is super hurtful to families to not somehow acknowledge that the pain is still there.”