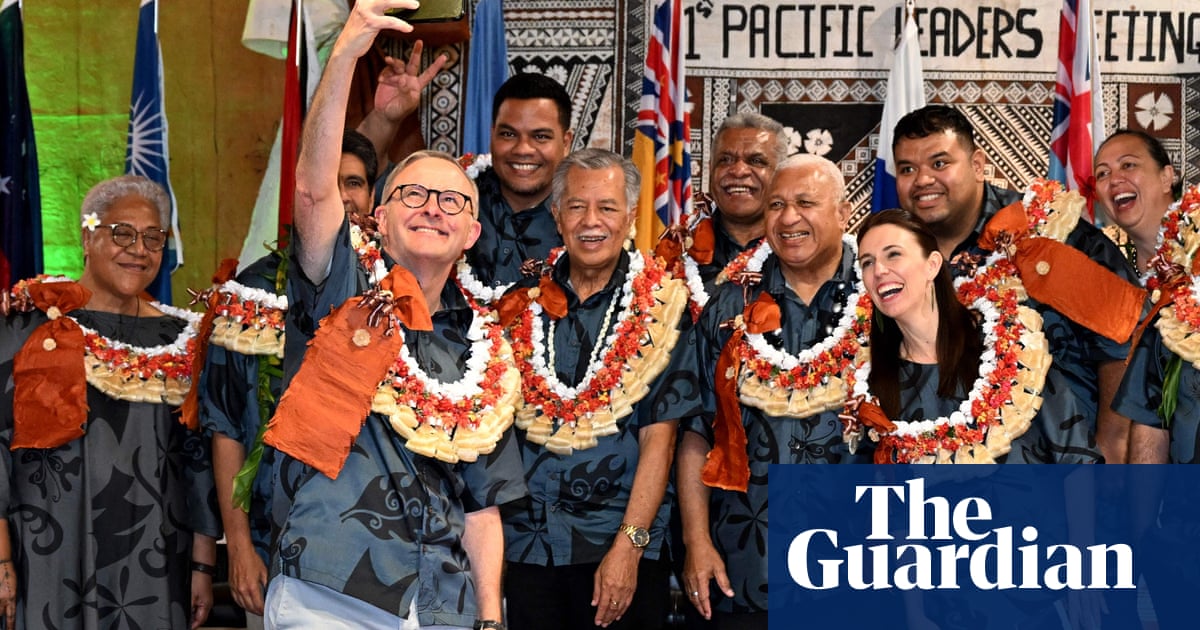 At the close of the Pacific Islands Forum the leaders emerged from their retreat smiling, cut a giant cake with a sword and then, in an impromptu moment of diplomatic bonhomie, posed for a selfie after Anthony Albanese whipped out his phone, Ellen DeGeneres style.

It was, quite literally, a picture of harmony.

“It’s been a very successful meeting of the Pacific Islands Forum,” said Albanese at his post-leaders’ retreat press conference. “We are family when it comes to the Pacific and there was a good spirit of cooperation and dialogue speaking about a common interest.”

If the last in-person summit in Tuvalu was all about taking the climate fight to Australia, this year’s was all about Pacific unity – with the notable exception of Kiribati.

The leaders of Tonga, Palau, Papua New Guinea and the vice-president of French Polynesia joined Albanese to watch the State of Origin, while Jacinda Ardern teased him about the result the next day.

Even Manasseh Sogavare, the prime minister of Solomon Islands, who has had some not so positive things to say about Australia in recent months after the signing of its security deal with China, greeted Albanese at the beginning of their bilateral meeting with a hug.

Albanese put the diplomatic good vibes down to the relief of Pacific leaders at Australia’s increased ambition on climate change under his government. But while there is definitely optimism among leaders, one can’t help thinking the big smiles were also a result of some vexatious questions facing the region being put on the shelf for another day.

Take coal. This will inevitably be a sticking point between Pacific countries and Australia, but apparently did not come up at all in discussions.

“I was not asked about that,” he said. “Not one person today raised such questions in the meeting, nor was it raised in any of the meetings I held.”

But it will only be hypothetical for so long.

Pacific leaders have consistently told countries, including Australia, they must transition rapidly away from coal and commit to no new fossil fuel projects if the world is to meet its goal of keeping warming under 1.5C, which is needed for all Pacific Island countries to survive.

It was a big difference between this year’s forum and the one in 2019, attended by Scott Morrison and hosted by Tuvalu – a low-lying atoll nation considered one of the most at-risk due to sea level rise.

Coal was brought up directly and repeatedly with Scott Morrison. Pacific Island leaders attempted to have commitments about transitioning away from coal power included in the communique, but Australia had those removed, which almost derailed the talks.

There were no such attempts this year. So why this shift in tone?

It’s not that they have changed their stance on coal’s place in a heating world. Frank Bainimarama, Fiji’s prime minister, told journalists after the leaders’ retreat that his country’s “ask” of all countries, including Australia, was to end their “fossil fuel addiction, including coal”.

Firstly, there is a feeling of genuine relief among Pacific leaders at the shift in tone and policy from the Australian government on climate change.

Australia is now singing from a climate songbook that more closely resembles that of Pacific Island leaders.

Secondly, there is a recognition that the Australian government is new and needs some time to find its feet before the Pacific really puts the pressure on to do more.

“Obviously they’ve been in office for about two months now, but the messaging that’s coming from them is very positive. So we’re hopeful that we can work on the issues that the Pacific is pushing for,” said Simon Kofe, Tuvalu’s foreign minister, on the sidelines of the forum.

But he agreed that if Australia were to approve new coal projects that would put them at odds with the rest of the region. “I mean, that’s one of the issues that we were at odds with the previous government,” he said.

The other conversation that has been put off is China.

Pacific leaders have demonstrated in recent months how important the Pacific Islands Forum bloc is when negotiating with the superpower. Pacific leaders were able to refuse the sweeping regional economic and security deal proposed by Chinese foreign minister Wang Yi in May, in large part because they were able to say that the issue needed to be discussed at the Pacific Islands Forum.

Pacific countries have to walk a tricky line when it comes to China and this was an answer that gave them safety in numbers, while also showing China there is established regional architecture that needs to be respected.

Typically at the Pacific Islands Forum each year there is a meeting on the day after the leaders’ retreat at which partner countries like China, the US and Japan can give presentations.

It was widely expected that China would use that meeting to reintroduce their regional deal, but that partners’ meeting was postponed for later in the year at a date yet to be decided.

Incidentally, the fact that the partners’ dialogue was cancelled but that US vice-president Kamala Harris, was given a chance to speak virtually to leaders and China is significant.

The president of the Federated States of Micronesia, David Panuelo told the Guardian that the postponement of the partners’ meeting was about giving leaders some breathing room from the intense geopolitical tension.

But it is a discussion deferred rather than dealt with.

Pacific leaders will still meet with China later this year, at a post-forum event and they will still have to decide what to do about China’s amended regional deal.

So while leaders may be basking in the glow of a friendly and successful forum, there are some tough conversations that have been kicked down the road.