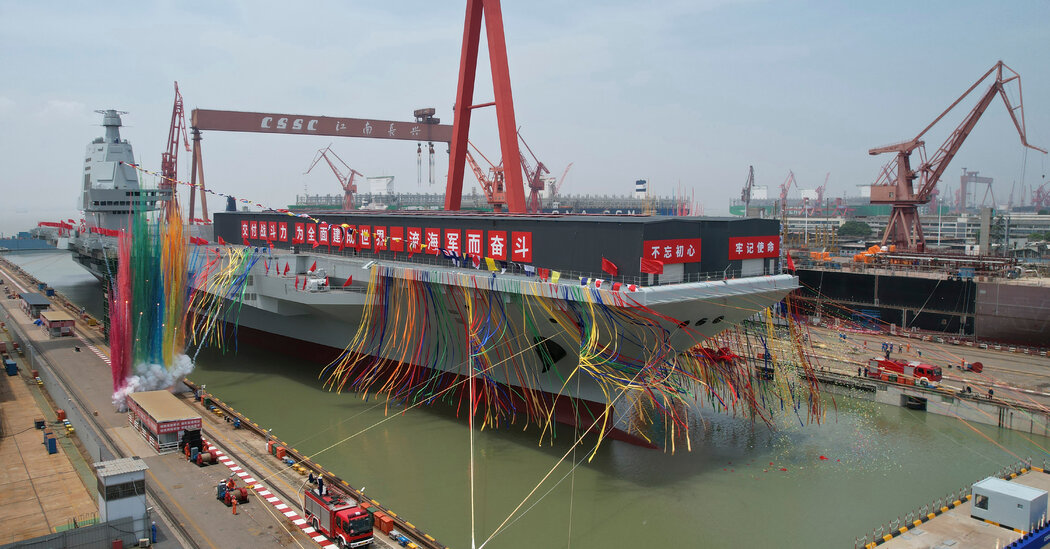 China launched its third and most advanced aircraft carrier on Friday, bringing the country one step closer to a modern navy capable of competing with the United States’ military naval power.

The ship, named Fujian after the Chinese province that sits across from Taiwan, is the navy’s most modern and resembles the latest American carrier, the Gerald R. Ford. Though the launch was widely expected, it comes amid heightened tensions in the South China Sea and days after China’s defense minister, Gen. Wei Fenghe, warned it would not back down from war with Taiwan if Taiwan took steps toward independence.

“The launch is a major milestone for the People’s Liberation Army,” said Drew Thompson, a former Pentagon official responsible for China, adding that it reflected “China’s long-term ambitions to project power militarily and compete directly against the United States.”

Chinese state media on Friday showed naval officers watching as fireworks were set off and confetti was released alongside the carrier in the Jiangnan Shipyard near Shanghai. Red banners carrying slogans about fulfilling the party’s goal of building a modern navy and a strong army were draped across the carrier’s deck.

China’s top leader, Xi Jinping, has made modernizing the military a key mission, and expanding its navy is at the heart of that plan. The new carrier will allow China to extend its power further afield and help to protect its interests in the South China Sea and beyond at a time of geopolitical strain.

Russia’s invasion of Ukraine has raised the specter of war in Taiwan and given more credence to Mr. Xi’s vision of claiming the self-governed Taiwan as a “rejuvenation” for China. Its military has demonstrated its might in ways that have increasingly drawn rebuke and warnings from Washington and its allies.

“Because China has not been fully unified so far and continues to have disputes in the South China Sea and Diaoyu Islands, it is necessary for China to strengthen its military capabilities,” said Song Zhongping, an independent Chinese military analyst, referring to the disputed islands in the East China Sea known in China as Diaoyu and in Japan as Senkaku.

Unlike its two earlier carriers that feature a “ski jump” deck, the Fujian has an electromagnetic catapult system, previously a feature that only the U.S. Navy had, state media reported.

The catapults are “a major leap forward” for China’s military, allowing it to launch fixed-wing aircraft capable of carrying heavier payloads and fuel, according to a report from the Center for Strategic and International Studies.

“It is not designed to protect airspace,” said Mr. Thompson, who is a senior fellow at the Lee Kuan Yew School of Public Policy at the National University of Singapore. “It is designed to drop bombs.”

China’s previous two carriers, named after the provinces of Shandong and Liaoning in northeastern China, are considered less sophisticated than most of the U.S. fleet, which is nuclear powered. But they also represented milestones for China’s military, which for decades had been focused on land warfare. There are reports of a fourth carrier that is expected to be nuclear powered, making China second to the United States, which has 11 aircraft carriers in service.

While China’s third aircraft carrier was launched on Friday, it will still be several years before it is fully operational, said Nick Childs, a senior fellow for Naval Forces and Maritime Security at the International Institute for Strategic Studies.

“We’re talking about not before 2025,” Mr. Childs said. Still, “it’s a bit of welcome headline-grabbing news for the party and it is a reminder of their clear intent.”

Discontent among the population. The Chinese government’s censorship and surveillance, which the pandemic has aggravated, are pushing a small but growing group of Chinese to look for an exit. Younger Chinese in particular are embracing the view that they might need to flee the country in the pursuit of a safer and brighter future abroad.

A new trick for internet censors. To control the country’s internet, China’s censors have relied for years on practices like on deleting posts, suspending accounts and blocking keywords. Now they have turned to displaying users’ locations on social media, fueling pitched online battles that link Chinese citizens’ locations with their national loyalty.

An uncertain harvest. Chinese officials are issuing warnings that, after heavy rainfalls last autumn, a disappointing winter wheat harvest in June could drive food prices — already high because of the war in Ukraine and bad weather in Asia and the United States — further up, compounding hunger in the world’s poorest countries.

The military advancement will also give more political weight to recent assertive comments and actions by China, experts said. At a regional security forum last week in Singapore, top military officials from the United States and China traded barbs over Taiwan.

In response, General Wei said China would do everything it could to allow for peaceful unification with Taiwan, which it considers its own.

But, he added, “no one should ever underestimate the resolve” of China’s military.