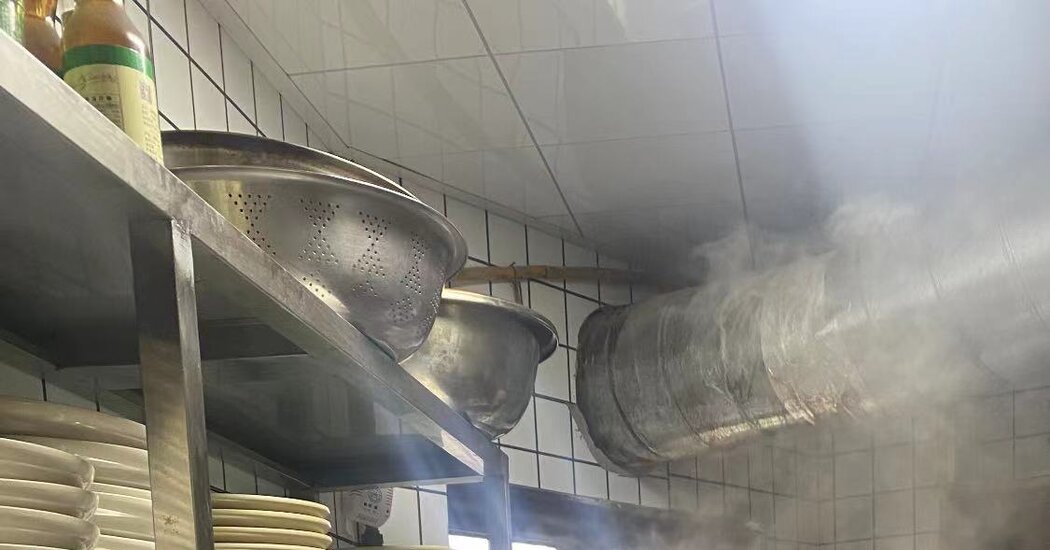 This piece is one of 10 winners of our 2022 Profile Contest. You can find more here. Stephanie Chen, the author, is 16 and goes to Shanghai American School, Pudong Campus, in Shanghai.

It’s lunchtime on Sunday. Sifang Beef Noodles, a little store tucked away in a gentrified corner of Pudong New Area, Shanghai, is full of hungry customers. Opened as a halal noodle store by an Indigenous Hui family, Sifang Beef Noodles has become a neighborhood staple.

Haronnae Wang, the owner, sits behind the counter, taking in the crowd. Now 40, he’s been running noodle stores in Shanghai for 19 years. His 6-year-old son plays video games next to him, and his wife and brothers work the kitchen in the back. They all migrated together, leaving the Hui Autonomous Region in Qinghai Province to earn money in the city. Whenever Mr. Wang sees a fellow Hui person walk into the store, his eyes light up with excitement. His Hui customers are happy to be there, too, saying, “It’s hard to find halal food in Shanghai, and this tastes like home.”

The following are excerpts from conversations with Mr. Wang, translated from Mandarin and edited for clarity.

How did you end up opening a restaurant in Shanghai?

My community back in Qinghai was largely agrarian. Everyone I knew farmed for a living, and I thought I was going to be a farmer, too. But then, by the time I was 17, 18, people started moving away. Everyone wants a better life, and there are just no opportunities in Qinghai. I had a friend who was already in Shanghai at that time. He helped me and my family move.

I opened a noodle shop the first year I came, and I’ve switched locations a couple of times, but I’ve never changed my business. I think most of the Hui people who come here run some sort of small business.

Is there a reason running a small business is such a popular option for Hui migrants?

I wouldn’t really call it an option, actually, because we don’t have many other choices. Few of us have much formal education, so white-collar work is out of the picture. It’s also hard for us to compete with local people for factory jobs, since we don’t have a hukou [A hukou is a registration system in China identifying a person’s “permanent residence.” For migrants like Mr. Wang, applying for a Shanghai hukou is often an impossibly difficult process. He, like many other migrants, still holds the hukou from his childhood home.]

But I also like running a noodle shop. It’s manageable, and it’s easier for our entire family. We can bring the kids to work. Our profits took a hit with the pandemic, but we’re still able to send money home each year.

So Qinghai is still home to you?

Qinghai will always be home for me. My parents still live there, and when my son grows older we’ll send him back for school. Without a hukou, he can’t receive a public education here, we can’t buy a house here and we can’t retire here. Qinghai is still home, no matter what. We try to go back every year, too, for Eid al-Fitr and Eid al-Adha.

The vast majority of people living in Shanghai are atheist Han people. What is it like living as a Muslim here?

When I wear the taqiyah or my wife wears a hijab outside, we get stares sometimes. I don’t think it’s too noticeable, but it’s quite common. I would say people aren’t bigoted or judgmental as much as they are curious, however. Most Han people I’ve met know little about the Muslim religion or Hui culture. But no one has ever been directly malicious because of my religion.

I do think there’s a tight-knit Hui community in Shanghai, though. Even if I’ve never met them before, when a Hui person comes into my restaurant, they’ll use the Arabic greeting, “as-salaam-alaikum.” It means “peace be upon you.” When someone says that, I know that they are Hui as well, and I immediately feel like I’ve met a close friend. There’s a saying that goes “All Hui people under the sky are brothers.” We are an Indigenous minority group in a big country of over a billion people. Especially in a metropolis like Shanghai, every single Hui person is family.