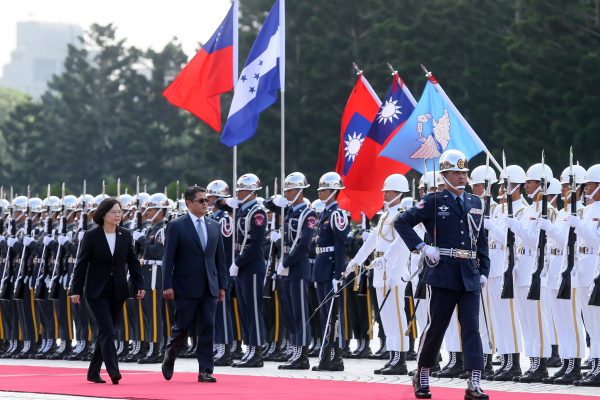 On December 9, 2021, the first day of the Biden administration’s Summit for Democracy, Nicaragua severed its diplomatic ties with Taiwan and resumed relations with China. It is hard not to believe that the timing of the announcement was China’s riposte to the U.S. invitation for Taiwan to participate in the summit.

A week before the summit, it was speculated that Honduras would be the next Central American state to flip from Taiwan to China, following the victory of the leftist candidate Xiomara Castro in the Honduran presidential election. Castro had promised to embrace China if elected as president of Honduras. So far, this has not come to pass.

Taiwan’s Diplomatic Forays Into Latin America and the Caribbean

Taiwan was in Latin America and the Caribbean well before China appeared in that region. Apart from Cuba, Beijing did not have any ally in the U.S.-dominated Western Hemisphere until the 1970s when the Sino-U.S. reconciliation began and Taiwan started to become isolated diplomatically. To fill this diplomatic hollow, Taiwan made an effort to woo the Caribbean island states, namely, Saint Vincent and the Grenadines, Dominica, Saint Kitts and Nevis, and Saint Lucia. Taipei’s courtship mainly involved provision of technical aid in the primary sector. Later in 1989, Taiwan managed to win diplomatic recognition of five more states in the region as a result of international rage fuelled by the Tiananmen Incident in Beijing.


Taiwan established the International Cooperation and Development Fund to provide loans and donations to countries in the region that were willing to recognize Taiwan as a sovereign entity – the Republic of China – and exchange high-level official visits. Given the density of diplomatic allies in Latin America and the Caribbean, and easier access to the U.S. market, Taiwan has been enthusiastic about assisting these regional states. In turn, some of them welcomed Taiwan as an observer in the Central American Integration System.

Taiwan’s aid to medical and technical industries in Latin America and the Caribbean accounts for 30 to 50 percent of the total aid to the region between 1979 and 2006, second only to Spain, the former colonial power in Central and South America. Packed with many underdeveloped countries, Latin America and the Caribbean are in dire need of investment and infrastructure. Countries in the region have smartly navigated between China and Taiwan, using diplomatic recognition as leverage to win larger donations.

Then in 2008, the Ma Ying-jeou administration on Taiwan managed to reach a “diplomatic truce” with Beijing by agreeing to the 1992 Consensus – that is, both sides of the Taiwan Strait belong to “one China,” a term deliberately left undefined. Taiwan then switched its mode of engagement from hard-cash payments to infrastructure projects in Latin America and the Caribbean. Taiwan also sought Latin American allies, such as Belize,  Guatemala, Honduras, and Paraguay to sign free trade agreements and economic cooperation agreements to further strengthen their economic ties.

China is a relatively late-comer to Latin America and the Caribbean. Cuba is China’s rock-solid communist comrade. In 1999, Beijing gained another friend, Venezuela. On the economic front, China has made huge progress: Even for the traditional allies of the United States, such as Brazil, Chile, and Uruguay, China has become their largest trading partner. Apart from tight economic connections, China also forms a united front with Argentina against “Western colonialism,” upholding Buenos Aires’ claim to the Falkland Islands/Malvinas.

Taking China’s huge economy into consideration, the balance has begun tilting to China’s side since the early 2000s. Upset by the abandonment of the 1992 Consensus by Tsai Ing-wen’s administration, China has reignited the cross-strait diplomatic battle since Tsai took office in 2016. Between 2016 and 2021, China has deprived Taiwan of eight diplomatic allies, half of which are in Latin America and the Caribbean – Panama, Dominican Republic, El Salvador, and Nicaragua. China’s Belt and Road Initiative (BRI) has been the main vehicle to attract Latin American friends to its side.

Currently, 21 out of 33 Latin American countries have signed up for China’s BRI by May 2022. Through this initiative, China hopes that Latin America countries could reinforce their ties with China without Washington’s interference.

Under such circumstances, in order to stabilize its shaky diplomacy in Latin America, Taiwan has turned to the United States for help. The U.S. offered transit stopovers in Houston and San Francisco amid Tsai’s visit to four Central America countries in January 2017. Furthermore, Washington recalled ambassadors to Panama, Dominican Republic and El Salvador in response to their switch from Taipei to Beijing in 2018. In 2019, the U.S. Congress adopted the Taiwan Allies International Protection and Enhancement Initiative (TAIPEI) Act, which aims to support Taiwan in strengthening its partnership with other countries. The act empowers Washington to exert punitive measures on countries who may abandon Taiwan for China, by using the cancellation of foreign aid as leverage over Latin America states like Nicaragua, El Salvador and Guatemala.

Consequently, Beijing has accused the United States, which claims to be this region’s patron saint, of practicing hegemonic interventions in Honduras behind the veil of the Monroe Doctrine.

Compared with Washington’s sluggish reactions, Beijing’s prompt decision-making to offer economic inducements better serves the short-term interests of political parties operating in their respective electoral cycles. Taiwan has also acknowledged the downside of over reliance on the U.S. in managing its diplomatic networks in what used to be the United States “backyard.”

At present, among Taiwan’s 14 diplomatic allies, eight of them are located in Latin America and the Caribbean, namely, Belize, Guatemala, Haiti, Honduras, Paraguay, Saint Kitts and Nevis, Saint Lucia, and Saint Vincent and the Grenadines. The question is how long Taiwan can rely on the U.S. to forestall further diplomatic losses in this region.

In the short term, it is anticipated that Belize, Saint Lucia, Saint Kitts and Nevis, and Saint Vincent and the Grenadines will maintain diplomatic ties with Taiwan, as the incumbent ruling parties are expected to stay in power. President Castro of Honduras will also maintain the linkage with Taipei, as signaled by her meeting with Taiwanese Vice President William Lai, who attended Castro’s inauguration. On the other hand, Guatemala’s conflict with the United States over migration policy and increasing authoritarian streak might propel President Giammattei to seek help from potential partners like China. The incoming 2023 presidential election in Paraguay might usher in a new leader who would truly say goodbye to Taiwan. In the case of Haiti, a switch from Taiwan to China could be imminent if the political and economic crisis worsens, although Washington’s cancellation of humanitarian aid as a backlash shall be taken into consideration.

In a word, as long as the Taiwanese authorities disregard the 1992 Consensus, China will definitely further isolate Taiwan all over the world by poaching its diplomatic allies, including in Latin America. We can expect this trend to continue at least until the end of Tsai’s term in 2024 – if not beyond.