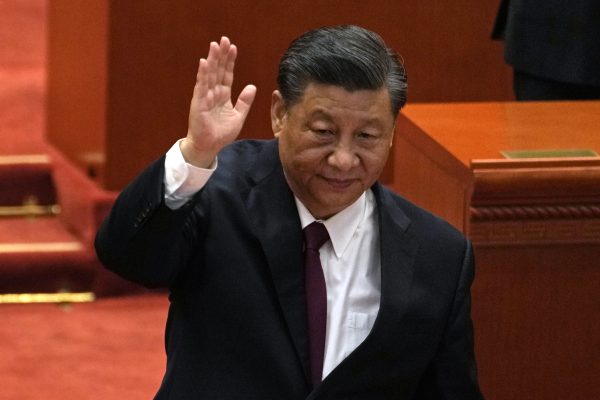 While the war in Ukraine is naturally dominating world politics at the moment, for China the major event of 2022 is the 20th National Congress of the Chinese Communist Party. The consensus view is that General Secretary Xi Jinping’s third term is assured. However, for Xi to get his third term, some institutional adjustments and explanations will be needed.

First, Article 6 of the 2006 “Regulations on the Selection of Leading Party and Government Cadres” stipulates that reappointments to positions in the Chinese Communist Party (CCP) can be made only once, precluding a third term. This regulation is still in effect today, and if it were to be applied in its present form that would make it difficult for Xi to serve a third term. However, Xi could use this regulation to his advantage by becoming Chairman of the CCP on the grounds that he cannot serve three terms as General Secretary.

Second, under the 2015 “Several Provisions on Advancing Capacity to Promote and Demote Leading Cadres (Provisional),” cadres must retire when they reach a certain age. However, party committees (or party groups) are now able to submit their views to higher party committees for consideration seeking permission to postpone retirement if deemed necessary for the performance of their duties.

In addition, Xi has established a system that allows personnel to be selected on the basis of their abilities and other criteria, rather than their career histories. This had allowed him to choose proteges from his time in Fujian Province, Zhejiang Province, and Shanghai.

Third, according to the convention commonly referred to as the “seven-up and eight-down” rule, a cadre who is 68 or older must retire while a cadre who is 67 or younger may remain in office. However, there appears to be no explicit regulation regarding this rule. Some researchers maintain that the retirement age stipulated in the regulations is 70, as of July each year. Even if the 2015 “Several Provisions on Advancing Capacity to Promote and Demote Leading Cadres (Provisional)” allows Xi to postpone his retirement, the question remains as to which cadres will actually retire. Even if Li Zhanshu (Chairman of the Standing Committee of the National People’s Congress) becomes the oldest to retire, it is unclear whether Han Zheng (First Vice Premier) will step down. In any event, according to the current regulations, there is a strong likelihood that the majority of the seven most senior leaders of the CCP will remain in office.

Currently, the 25 Members of the Standing Committee of the Political Bureau of the CCP are mostly Xi’s proteges. It is therefore highly unlikely that a political struggle over personnel matters will arise at the party center. While there is talk of opposition from Zhu Rongji (the former premier) and his colleagues, their influence will be limited. Be that as it may, Xi is also bound by the party’s statutes and some explanations will be needed. Also, many changes have been made to the party’s statutes under the Xi administration, as well as substantive personnel changes. Most of the newly appointed provincial heads are no longer Members of the Standing Committee of the Political Bureau.

While changes have been made to the personnel system and to the personnel themselves, the majority of the lineup in the Xi administration will remain unchanged in 2022. However, the limits have been reached when it comes to proteges. Xi has almost exhausted the pool of subordinates from his time in the provinces. Given that choosing proteges will be more difficult going forward, a new basis for selecting personnel is needed, including the nomination of a successor. In that sense, the personnel appointed in the fall of 2022 represent a transit point for Xi. A new system will be created and new personnel will be appointed. Xi’s successor and the future new structure of the Chinese Communist Party leadership will then emerge.