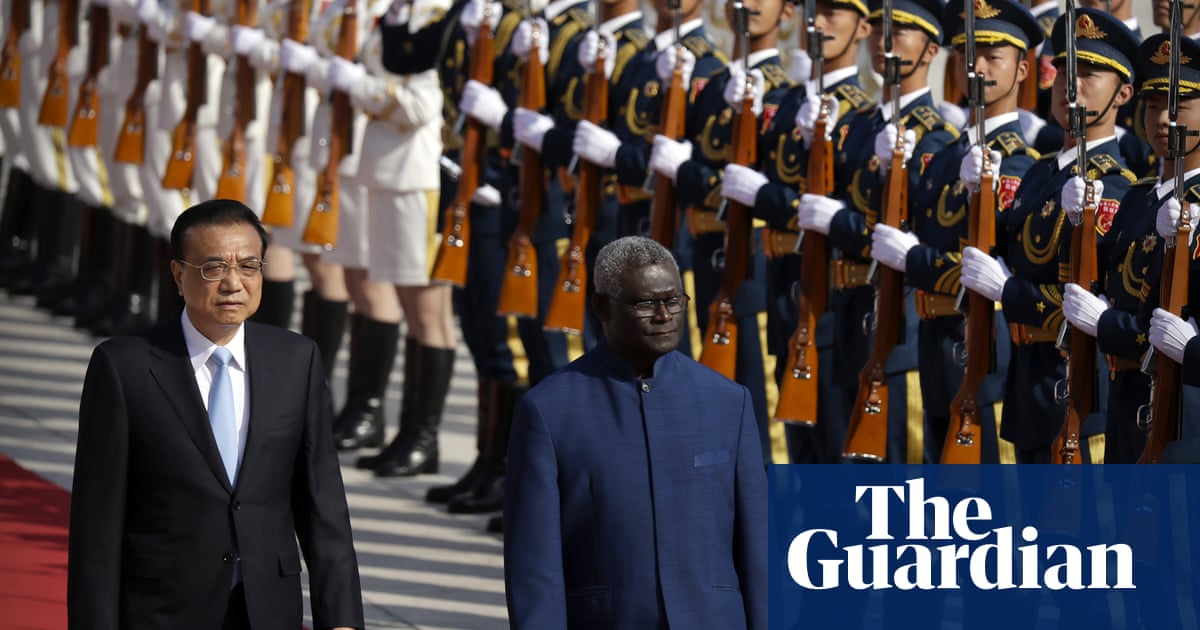 Labor has lashed the Coalition in the wake of the newly signed security agreement between China and Solomon Islands, branding it “the worst Australian foreign policy blunder in the Pacific” in decades.

The Coalition government sounded the alarm over the deal, arguing the pact has been negotiated in secret and could “undermine stability in our region”. The foreign affairs minister, Marise Payne, and the minister for the Pacific, Zed Seselja, said they were “deeply disappointed” by the deal, and would “seek further clarity on the terms of the agreement, and its consequences for the Pacific region”.

“We are concerned about the lack of transparency with which this agreement has been developed, noting its potential to undermine stability in our region,” they said in a statement late on Tuesday.

Labor’s foreign affairs spokesperson, Penny Wong, was scathing on Wednesday morning. She accused the Coalition of mishandling the situation, raising concerns of a potential Chinese military presence around 1,600km from Australia in the Solomon Islands.

“On Scott Morrison’s watch, our region has become less secure, and the risks Australia faces have become much greater,” she told ABC’s AM radio.

Seselja took time out of the Australian federal election campaign last week to visit Honiara and to ask Solomon Islands prime minister Manasseh Sogavare “respectfully” to consider not signing the proposed security agreement with China. His efforts appear to have failed to prevent the deal from proceeding.

Wong said the government should have done more, describing the deployment of Seselja to the situation as “a junior woodchuck at the last minute”.

“Yet again Mr Morrison has gone missing and might talk a tough game, but what we are seeing on his watch is the worst Australian foreign policy blunder in the Pacific since the end of world war two,” Wong told ABC News.

In her own interview with AM, Payne said the government was disappointed at the agreement but respected the sovereignty of the Solomon Islands. She denied the Coalition had dropped the ball, saying she and Morrison had engaged directly with the Solomon Islands’ government by phone on the issue, and called Labor’s criticisms “unfair”.

“We firmly believe the Pacific family is best placed to meet the security needs of our region,” she said.

“We are looking at very serious geostrategic challenges in our region.”

In their statement, Payne and Seselja said Australia would “continue to strongly encourage the Solomon Islands to engage in regional dialogue and to work with the Pacific family first, including prior to seeking security assistance from China under this arrangement”.

The announcement is set to heighten the concerns of Australia, the United States and New Zealand about growing Chinese influence in the Pacific. A high-level US delegation was due to travel to Honiara this week.

He did not give details of where, or precisely when, the signing took place.

The Chinese embassy in Honiara also confirmed to the Guardian that the document had been signed.

The Australian government is concerned the pact, details of which have not been made officially public, could be a step towards a Chinese military presence less than 2,000km from Australia.

A draft version of the agreement, leaked last month, sent shock waves across the region over provisions allowing Chinese security and naval deployments to the crisis-hit Pacific island nation.

According to the draft, armed Chinese police could be deployed at Solomon Islands’ request to maintain “social order”.

Sogavare’s assurances that he does not intend to allow China to build a military base there has done little to alleviate the concerns.

Earlier on Tuesday the Pacific island nation’s parliament was told that China would send officials to Solomon Islands next month to sign cooperation pacts.

Although the Chinese embassy and Solomon Islands officials had previously initialled the security pact, ministers had not yet signed it.

On Monday, the White House said a high-level US delegation, including Indo-Pacific coordinator Kurt Campbell, would also travel to Honiara this week to discuss concerns about China, as well as the reopening of a US embassy.

“The broad nature of the security agreement leaves open the door for the deployment of PRC military forces to the Solomon Islands,” US state department spokesperson Ned Price said on Monday.

The signing of the pact “could increase destabilisation within the Solomon Islands and will set a concerning precedent for the wider Pacific Island region”, he added.

But Wang, the Chinese foreign ministry spokesperson, said on Tuesday, when asked about the US officials’ scheduled visit: “Deliberate attempts to inflate tensions and mobilise rival camps are also doomed to fail.”

Honiara’s parliament was told by chairman of the public accounts committee and lawmaker for East Honiara, Douglas Ete, that Chinese foreign ministry officials would arrive next month.

“The PRC foreign affairs is heading to Honiara in the middle of May to sign multilateral agreements and cooperations with the Solomon Islands government,” he said, referring to China.

Ete said the visit meant the two nations would increase cooperation on trade, education and fisheries, but added that he rejected the idea of the Solomons signing a security pact with China to set up a military base.

Sogavare told parliament the proposed security agreement would not include a Chinese military base. His office said it could not confirm which Chinese officials would visit Honiara.

Sogavare has previously said it was insulting to suggest Solomon Islands could not manage its own sovereign affairs, and has said the country maintains a “friends to all, enemies to none” foreign policy.