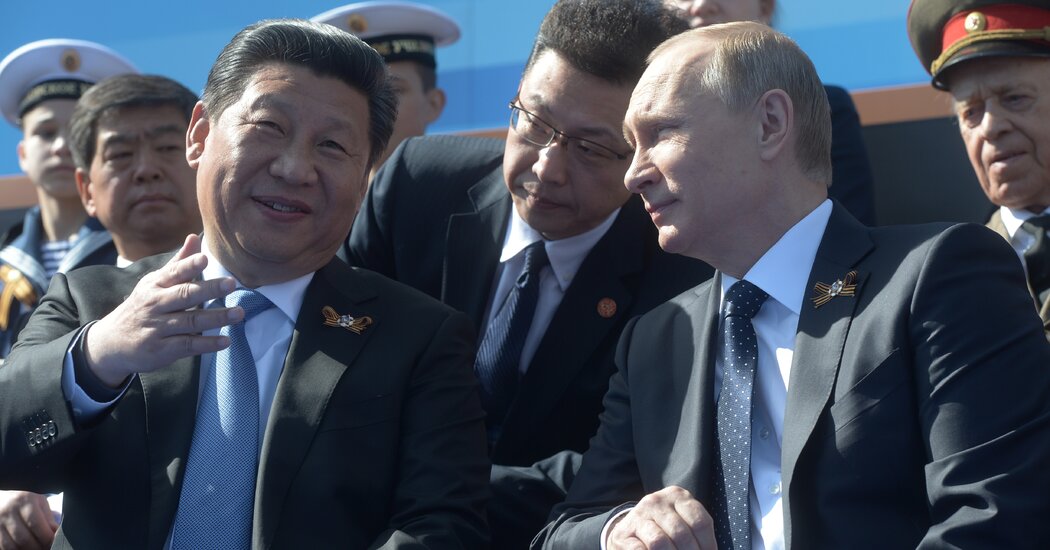 While Russian troops have battered Ukraine, officials in China have been meeting behind closed doors to study a Communist Party-produced documentary that extols President Vladimir V. Putin of Russia as a hero.

The humiliating collapse of the Soviet Union, the video says, was the result of efforts by the United States to destroy its legitimacy. With swelling music and sunny scenes of present-day Moscow, the documentary praises Mr. Putin for restoring Stalin’s standing as a great wartime leader and for renewing patriotic pride in Russia’s past.

To the world, China casts itself as a principled onlooker of the war in Ukraine, not picking sides, simply seeking peace. At home, though, the Chinese Communist Party is pushing a campaign that paints Russia as a long-suffering victim rather than an aggressor and defends China’s strong ties with Moscow as vital.

Chinese universities have organized classes to give students a “correct understanding” of the war, often highlighting Russia’s grievances with the West. Party newspapers have run series of commentaries blaming the United States for the conflict.

Around the country, the Communist Party has organized sessions for officials to watch and discuss the history documentary. The 101 minute-long video, which was completed last year, does not mention the war in Ukraine but argues that Russia is right to worry about neighbors that broke away from the Soviet Union. It describes Mr. Putin as cleansing Russia of the political toxins that killed the Soviet Union.

“The most powerful weapon possessed by the West is, aside from nuclear weapons, the methods they use in ideological struggle,” says the documentary’s stern-voiced narrator, citing a Russian scholar. The documentary was marked for internal viewing — that is, for audiences chosen by party officials and not for general public release — but the video and script have recently surfaced online in China.

Since the demise of the Soviet Union, it says, “some countries in Eastern Europe, Central Asia and Transcaucasia have become forward positions for the West to contain and meddle in Russia.”

China’s leaders have long used the Soviet collapse as a cautionary tale, but Mr. Xi has given that tale a more urgent, ominous spin. In doing so, he has embraced Mr. Putin as a fellow authoritarian lined up against Western dominance, demonstrating to the Chinese people that Mr. Xi has a partner in his cause.

China has refused to condemn Mr. Putin for the war, which has killed thousands of civilians. Despite pressure from other world leaders to use its influence over Moscow to help end the crisis, Beijing has done little besides call for peace. And on Thursday Wang Yi, the Chinese foreign minister, expressed his country’s commitment to strong ties with Moscow during talks with his Russian counterpart, Sergey Lavrov, in China.

The Biden administration has cast the war as a contest between democracy and authoritarianism. Chinese officials are mounting a counternarrative that American-led domineering is the source of conflict in Ukraine and elsewhere. They regard China and Russia as both menaced by “color revolution,” the party’s phrase for insurrections backed by Western governments. President Biden’s recent comments calling for Mr. Putin’s ousting are likely to reinforce Beijing’s view.

“They actually believe their own narrative about color revolutions and tend to see this whole situation as a U.S.-led color revolution to overthrow Putin,” said Christopher K. Johnson, the president of the China Strategies Group and a former Central Intelligence Agency analyst of Chinese politics.

“Both domestically and internationally, Xi has been pedaling this dark narrative since he took power,” Mr. Johnson said in an interview. “It allows him to justify his accumulation of power and the changes he’s made by creating this sense of struggle and danger.”

The documentary depicts the collapse of the Soviet Union as a lesson to Chinese officials not to be seduced by Western liberalism. China, the documentary says, must never follow the course taken by Mikhail S. Gorbachev, the Soviet Union’s last leader who had started glasnost, or openness, and engagement with the West.

In 2013, propaganda officials under Mr. Xi put out a documentary on the lessons of the collapse of the Soviet Union. This latest take offers an even more conspiratorial interpretation.

The documentary attributes the decline of the Soviet Union to political liberalization, especially what Beijing calls “historical nihilism,” or emphasizing the Communist Party’s mistakes and misdeeds. It accuses historians critical of the Soviet revolution of fabricating estimated death tolls by many millions for Stalin’s purges.

Stalin, it argues, was a modernizing leader whose purges went too far but initially “were something of a necessity” given the threats to Soviet rule. It suggests that rock music and modern fashion were symptoms of the moral rot that later set in.

“They’ve taken only one lesson from all of this, and that is you do not allow any freedom of expression,” said Sergey Radchenko, a professor at the Johns Hopkins School of Advanced International Studies who studies Chinese and Soviet history, “because this kind of freedom inevitably leads to loss of political control and that creates chaos.”

It shows Mr. Putin marching in a parade marking Russia’s victory over Nazi Germany, and young Russians kissing a banner featuring his portrait. Previous leaders in Moscow — above all Mr. Gorbachev and Nikita S. Khrushchev — are portrayed as dupes, bewitched by the siren song of liberal reform and Western superiority.

The documentary, “Historical Nihilism and the Soviet Collapse,” has been the centerpiece of a monthslong campaign aimed at party officials that has continued since Russia began its full assault on Ukraine on Feb. 24, according to reports on local government websites. Officials overseeing the screenings are often described in official notices as calling for cadres to maintain firm loyalty to Mr. Xi.

“Loving a party and its leader is not a cult of personality,” Zheng Keyang, a former deputy director of the party’s Central Policy Research Office and a consultant on the documentary, said in a discussion about the documentary published by a pro-party website this month.

Chinese leaders have been debating why the Soviet Union fell apart ever since it dissolved in 1991. More than his predecessors, Mr. Xi has blamed the Soviet Union’s breakup on lack of ideological spine and Western political subversion.

“If you have the worldview that you see in this documentary, you could tell yourself the story that the Russians are facing a real threat from the West,” Joseph Torigian, an assistant professor at American University in Washington who studies elite politics in China and Russia, said in an interview.

The study drive is aimed at instilling loyalty among cadres before a Chinese Communist Party congress late this year where Mr. Xi appears set to claim a third term.

Many of the critical essays have been deleted and the party has pushed harder to defend its stance in recent weeks. Editorials in Communist Party newspapers have amplified the Chinese leadership’s argument that the real culprit in Ukraine is the United States and NATO, for undermining Russian security.

“It was the United States that personally lit the fuse of the present conflagration between Russia and Ukraine,” stated one of a series of editorials in the Liberation Army Daily, the military’s main newspaper.

Universities and colleges have organized indoctrination lectures for students, suggesting that officials are worried that young, educated Chinese may be receptive to the criticisms that Beijing has been too indulgent of Mr. Putin.

Liu Zuokui, a researcher from the Chinese Academy of Social Sciences, told an audience of college students in eastern China that the war arose from “NATO’s eastward expansion that squeezed Russia’s space for survival,” an online summary of the lecture said.

China, another speaker told physicists in Beijing, had to protect its strategic partnership with Russia from “intense shocks and impacts.”

The party’s demands for conformity over the crisis will make it harder for any dissent to coalesce into a pushback against Mr. Xi.

“There’s an ‘either we hang together or we hang separately’ attitude that comes into play,” Mr. Johnson, the former C.I.A. analyst, said of Chinese leaders. “If it’s a strong nationalist approach, then who in the party doesn’t want to be a good nationalist?”