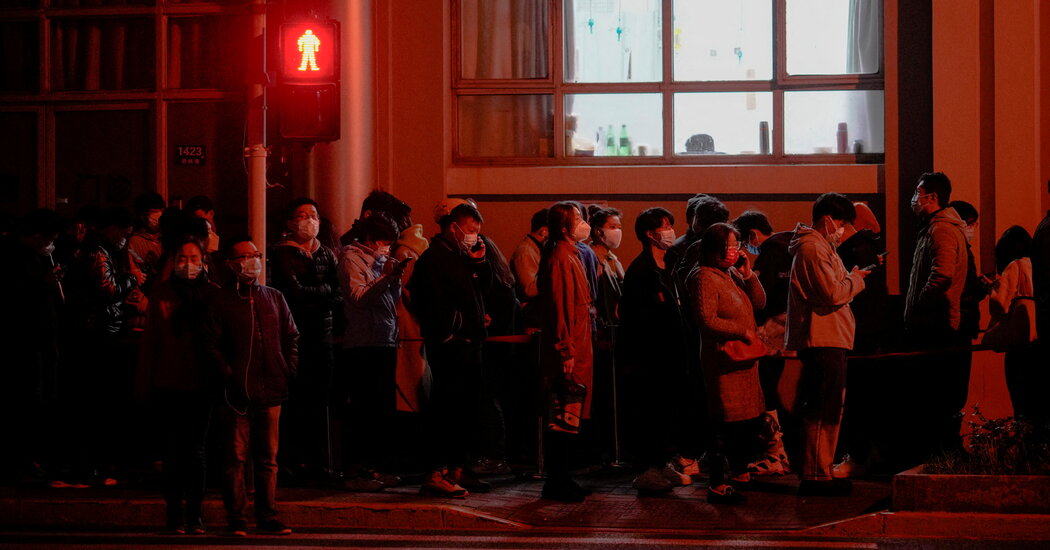 Photos and video that showed young children isolated from their families and crying at a Shanghai hospital led to an outburst of anger online on Saturday, as China’s largest city struggled to contain an outbreak of the highly contagious Omicron version of the coronavirus.

In the images, a series of hospital cribs, each holding several young children, appeared to be parked in the hallway of the Shanghai Public Health Clinical Center in the city’s Jinshan district. A video showed several of the children crying.

The images and video could not be independently verified, but in a statement, the health center said they were real and did not deny that parents with Covid were being separated from their children.

The fury and concern of parents over what might become of their children if they fall sick is the latest in a series of crises faced by Shanghai officials, who are in the middle of a staggered lockdown to facilitate mass testing in the city. Things have not gone smoothly. Lockdowns have differed by neighborhood, panic shopping has emptied grocery store shelves and people with life-threatening conditions have posted calls for help online when they could not get to the hospital.

The entire process has also been opaque. Residents complain they have had little warning about neighborhood lockdowns, which have been repeatedly extended in some districts. Domestic news reports of an outbreak at an elderly care center disappeared from the internet on Saturday.

In Shanghai, anyone who tests positive for the coronavirus, whether or not their symptoms are severe, must isolate in a hospital or designated facility. The practice has worried parents, who fear that their children will be separated from them if they are forced to isolate.

One woman who said her 2-year-old daughter was locked inside the Jinshan clinical center called the situation “totally inhumane” in a telephone interview. The woman, Lucy Zhu, a 39-year-old mother and Shanghai native, visited Shanghai Tongren hospital with her daughter after feeling unwell last week. Shortly after she tested positive for the coronavirus and began her isolation at the hospital, she was separated from her daughter.

Then on Tuesday, her daughter was transferred to the center in Jinshan, and Ms. Zhu was told she could not accompany her. From then until Saturday morning, she had not been able to establish direct contact with her daughter. Although officials said her daughter was fine, they offered her no proof.

“The doctor sent me a video at noon today,” Ms. Zhu said on Saturday. “In the whole room, there was only one nurse, but I saw around 10 minors.”

In a statement, the health center said that the children were in the process of being moved to a new, expanded pediatric center and that the center was not a child isolation center, as had been claimed online.

Ms. Zhu said the statement failed to address the main problem. “Is whether it is a child isolation facility the crux?” she asked angrily. “Could they treat children like this if it is not a child isolation point? What’s the point of clarifying the rumor like this?”

Having seen the plight of toddlers being separated from parents spreading on Chinese social media, Irene Yang took things into her hands and phoned the center on Friday. During the call, which she recorded and later posted on Weibo, Ms. Yang, a 28-year-old mother, almost burst into tears, worrying the same situation might happen to her as the coronavirus continues to ravage Shanghai.

A woman who answered Ms. Yang’s call told her that there could be a “time lag” when children were being transferred before parents could see them.

With a 3-year-old son and 1-year-old daughter at home, Ms. Yang said she could not “rest assured and let them go to any place alone, whether it is for medical treatment or isolation, no matter what the situation is.”

“For us, it is fine if we can be with our children even if they are infected, but you can’t take the children away by themselves. This is all inappropriate and unreasonable, whether they are 10 years old, 5 years old, or 3 years old or 1 year old. Otherwise, why do we have legal guardians in place?”

A woman who picked up the phone at the Shanghai Public Health Clinical Center on Saturday declined to comment further.

An article in the state-run China Philanthropist described one child being separated from her mother and father after they were sent to separate isolation hospitals. The article quoted the girl’s mother as expressing concern about her daughter after not getting any photos of her or other forms of communication from doctors. The government-affiliated Shanghai Women’s Federation said on Saturday that it was looking into the situation.

Zeng Qun, deputy director of the Shanghai Civil Affairs Bureau, acknowledged at a news conference on Saturday that infected adults might have to be separated from their children. He described the issue as “heart wrenching” and something that needs to be “resolved well.”

With designated child welfare workers at the township and neighborhood level already in place, Mr. Zeng said in situations like this, they are required to “respond quickly, and take the physical and mental safety of the children as the first principle, and quickly carry out emergency response and assistance services.”