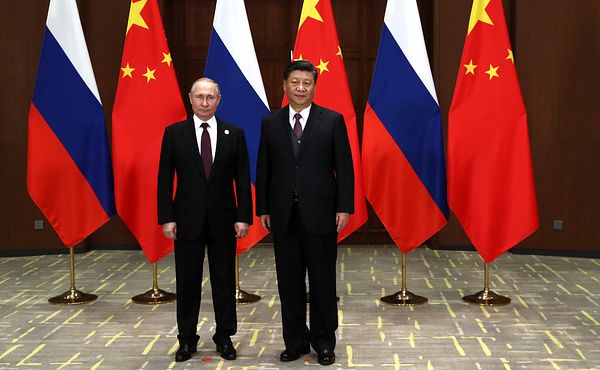 When Moscow ordered tanks to roll into its neighbor’s capital, the world watched with dismay as Beijing stayed silent. The “situation is rather complicated,” read one Foreign Ministry cable to its local embassy; “‘much listening, little speaking’ is necessary.” On the day of the invasion, the Chinese government called for “mutual respect for sovereignty and territorial integrity.” But when the fog of war receded, the Chinese Communist Party’s mouthpiece, People’s Daily, described the friendship between Beijing and Moscow as “eternal and unshakeable.”

The year was 1956 and the country that had fallen victim to the Kremlin’s belligerence was Hungary.

Flash forward to February 2022. Russia’s invasion of Ukraine has elicited a familiar response from Beijing. China’s Ministry of Foreign Affairs initially paid lip service to principles of sovereignty, but later described its partnership with Russia as “rock solid.” China abstained from – rather than vetoed – U.N. resolutions condemning Russia’s invasion, but Beijing blamed the United States and NATO for the outbreak of hostilities. President Xi Jinping claims that China “stands for peace,” but U.S. intelligence leaks suggest that Beijing signaled willingness to provide Russia with military aid.

Like past conflicts beyond China’s borders, Beijing is reacting to events on the ground to ensure that its wartime stance does not land it on the wrong side of history. If Vladimir Putin’s war of choice results in a quagmire – imposing large costs on Russia’s military and Ukrainian civilians – Beijing will be reluctant to lean closer to its enfeebled strategic partner. On the other hand, if Putin achieves his objectives in Ukraine, China could welcome an emboldened Russia, a NATO on its back foot, and a United States distracted from priorities in Asia. In short, China’s position on Ukraine will be determined by events on the battlefield.

Before the war in Ukraine, China and Russia had strong reasons to develop close relations. The two sides faced mounting pressure from the United States, harbored shared grievances about territories lost in prior wars, and maintained similar priorities with respect to preserving regime stability. As a result, just three weeks prior to Russia’s invasion of Ukraine, Putin and Xi signed a lengthy joint statement outlining their “no limits” friendship.

Analysts debate whether Xi knew about Putin’s invasion plans, but one thing is clear: Xi signaled little but public support for Putin in the run-up to his offensive. The Chinese leader may have concluded that Putin’s brinkmanship would help deflect the United States’ attention from Asia and put a thorn in the side of NATO, which had six months prior set its sights on “systemic competition” with China. Were Putin to launch an invasion, moreover, many in China believed that the Ukrainian government would either surrender or collapse. Widely circulated articles on Chinese social media suggested that the Russian military would encircle Ukraine’s capital, Kyiv, within days of the invasion.

A fast and easy Russian victory would serve three main benefits for China. First, a successful show of force by Russia would increase its strategic value as a deterrent to China’s potential adversaries. Although Russia and China do not maintain a formal defense treaty – and they often criticize “exclusive blocs” – their partnership nevertheless gives the appearance that an attack on one would be an attack on both.

Second, a Russia emboldened by military victory could lead to a permanent state of escalation in Europe, diverting Western attention from competing with China. Already, in the wake of Russia’s invasion, the United States delayed the release of its National Defense Strategy, which was originally expected to focus on the “pacing threat” from China. Meanwhile, NATO has dropped all pretense of devoting more resources to Asia, having recently deployed four new battlegroups to Eastern Europe.

Third, a triumph of Russian troops would weigh on the morale of small states, especially those located on the fringes of the United States’ security umbrella. Prospective NATO members could feel pressure to bandwagon with Moscow and small powers in Asia like Taiwan could grow acquiescent to the political demands of mainland China. Russia’s victory in Ukraine, in other words, could create a world in which strong states like China and Russia are better able to advance their political objectives without so much as firing a shot.

What was intended as a blitzkrieg turned into a quagmire. One month since Russia launched its invasion of Ukraine, it is clear that the war will be neither fast nor cost-free. Putin appears to have overestimated his military’s effectiveness and underestimated Ukraine’s resolve and the international community’s will to respond with sanctions and military support.

From the beginning, the Russian military has been bogged down by logistical and intelligence failures. After only four weeks, NATO officials estimated that 30,000 to 40,000 Russian troops have been killed, wounded, or captured, and some estimates suggest that the war is costing Russia $20 billion per day. As a result of sanctions, some forecast that the Russian economy will face its worst crisis since 1998. The longer the war drags on, the more likely Russia is to become a weaker, more isolated, and less valuable strategic partner to China.

Putin’s mess is Xi’s miscalculation. Russia’s offensive has not only unified the transatlantic alliance, but increased Europe’s commitment to its own defense. Moscow’s bungled invasion could lead Europe to gain more confidence in its defense capabilities, allowing the United States to shift its focus to the Pacific. The gradual drain on Russian forces will hinder its ability to provide Beijing with support in the face of mounting pressure from the United States, undermining the main strategic benefit to Beijing’s partnership with Moscow.

At the same time, a war of attrition will render Russia even more reliant on China. While greater asymmetry between China and Russia could give China access to discounted Russian commodities and sensitive military technologies, cooperation with Russia will raise the chances that Beijing runs afoul of secondary sanctions. Sanctions will exacerbate the slowdown in China’s economy, which is already reeling from COVID-19 outbreaks, capital flight, rising energy costs, and declining population growth. Since there is little that China can do, short of armed intervention, to materially influence Russia’s performance on the battlefield, Beijing is more likely to minimize economic blowback rather than risk providing Russia with largescale military support.

The worst-case scenario for Xi is one in which Putin not only loses the war in Ukraine, but loses his grip on power. While the Russian leader has devoted significant resources to stamp out political opposition at home, the combined humiliation of military defeat and prolonged economic malaise could lead to widespread discontent. As domestic pressure grows, China will have little recourse to stave off a transfer of power in Moscow, even if Xi continues to show diplomatic support. Were the Russian leader to fall, moreover, his “no limits” partnership with Xi would become a relic of history, and the Chinese populace could begin to question its leader’s choice to cozy up to Putin in the first place.

For these reasons, many analysts fear that failure may not be an option for Putin. If the Russian leader feels backed into a corner, he could choose to escalate the conflict by brutally targeting civilians or breaking the nuclear taboo. In this context, China’s unwillingness to back away from Russia will appear increasingly reprehensible and inflict further reputational damage on China.

In light of Russia’s dreary outlook in Ukraine, in recent weeks Beijing has gone to great lengths to cast itself as a neutral arbiter, boasting stable relations with all sides in the conflict. China’s unique position, its officials suggest, could allow it to play a pivotal role in facilitating a short-term ceasefire or perhaps a “lasting peace.”

The reality, however, is that China has done little to act on its peaceful rhetoric, preferring instead to wait until the dust settles to take a meaningful position on the crisis. The Chinese government’s messaging has simply been too vague and contradictory to allow Beijing to play the role of an honest broker.

Rather than a mediator, Beijing is better understood as a bystander, reacting to events on the ground to maximize its national interest. If the tides turn further against Putin, Russia’s value as a strategic partner will diminish, and Beijing could begin to distance itself from Moscow. If, however, Putin achieves his objectives and emerges stronger for it, China may welcome Russia with open arms.