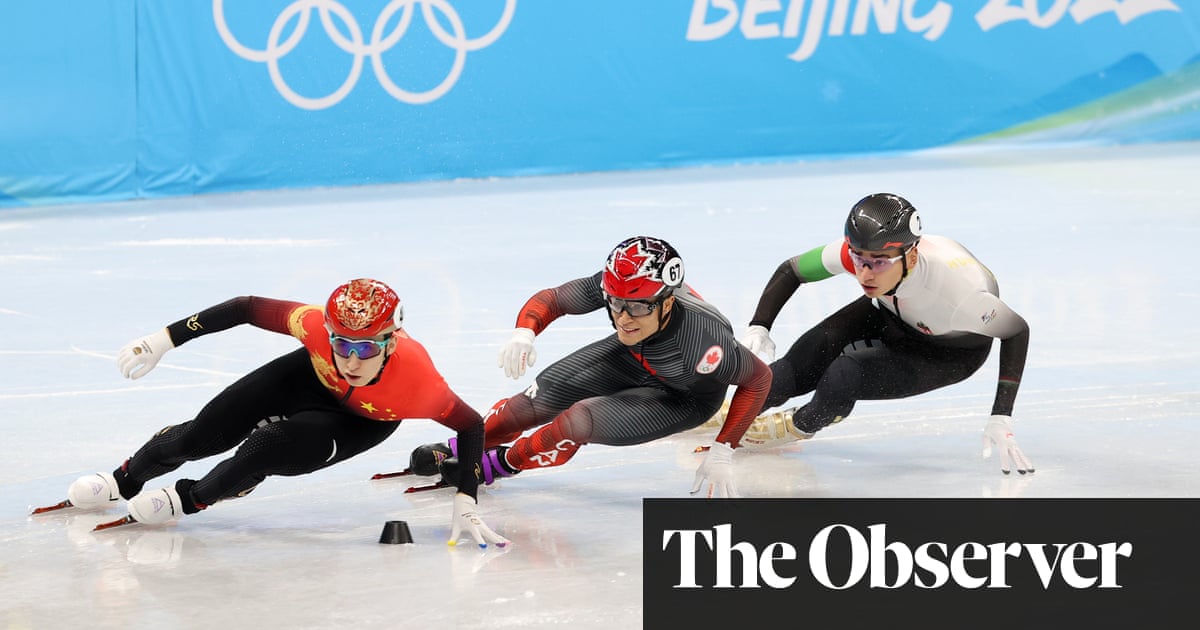 Glory on the track. Growing criticism off it. China ended day one of these Winter Olympics by celebrating a thrilling first gold medal, while also finding itself facing growing condemnation from human rights groups after selecting a Uyghur to light the Olympic flame.

The small number of fans in the Capital Indoor Stadium because of Covid-19 regulations certainly made themselves heard as China’s mixed relay quartet held off Italy by the width of a blade in a dramatic short-track speedskating final.

Afterwards, Wu Dajing, the country’s most famous active winter sports star, dedicated the victory to the nation. “We achieved this by working hard and pushing the envelope,” said the 27-year-old Wu. “We are very happy for this first gold medal for China, and as a motivation for our teammates in other events this is a very good start. We will work together. Thank you!”

However, China’s early success in these Games was overshadowed by the reaction to its decision to choose cross-country skier Dinigeer Yilamujiang, from the western Xinjiang region, where more than a million Uyghurs are in re-education camps, to perform the ceremonial act of lighting the flame.

The criticism was led by the World Uyghur Congress, which said it was “shocking and insensitive” and that China was deliberately sending a blunt message to a people it represses.

“China is politicising the Olympics, which we warned the IOC [International Olympic Committee] would happen,” its spokesperson, Zumretay Arkin, said. “But they didn’t want to listen to us. It is shocking and hugely insensitive to use a Uyghur athlete this way, when there is an ongoing genocide.”

The IOC has not commented on the repression of the Uyghurs, saying that it must stay politically neutral. But Arkin insisted that position is a sham.

“At the opening ceremony, the whole IOC narrative about sports and politics not mixing was shown up,” she added. “China’s government was sending a message: we control you, and we get to do whatever we want without being held accountable, and everyone is complicit in it.”

Her comments were reinforced by Bennett Freeman, a member of the Coalition to End Forced Labour in the Uyghur Region’s steering committee, who called China’s decision “a brazen, cynical ploy that the world should see through”.

But the IOC adopted a very different tone when asked about the opening ceremony and the decision to select Dinigeer, calling it a “lovely concept”.

“Obviously the opening ceremony is something that the organising committee put together and there’s creative input,” said IOC spokesman Mark Adams. “We are involved to a certain extent.”

“This is an athlete who is competing here. She has every right, wherever she comes from, whatever her background, to compete and to take part in any ceremony.”

Games organisers said the final handful of torchbearers who entered the stadium with the flame had been picked on the basis of their birth dates, with each having been born in a different decade, starting from the 1950s through to the 2000s. “I think it was a lovely concept,” added Adams.

The IOC also promised that a Dutch reporter who was dragged away by Chinese security officials in the middle of a live broadcast was the victim of an isolated event.

“I think someone was being overzealous,” said Adams. “He was able very quickly afterwards, with the help of officials there, to do his piece to camera.

“These things do happen. I hope it is a one-off, and we assure you that within the closed loop you will be able to go about your work.”

China ranks 177 out of 180 in the 2021 Reporters Without Borders World Press Freedom Index, but Beijing 2022 spokesperson Yan Jiarong promised that media rights would be respected.

Meanwhile there was further controversy as the Norwegian Therese Johaug, who missed the 2018 Winter Olympics because she was serving a doping ban, won the first gold medal of the Beijing Games in the women’s 7.5km+7.5km skiathlon.

Norwegian skiing officials blamed the positive drug test in 2016 on a team doctor’s mistake, claiming she had accidentally given Johaug a banned steroid that was contained in a lip balm, but the skier was still given an 18-month suspension for her negligence in missing a clear warning in the label listings.

But the most thrilling gold medal on the first day came in the short-track speedskating as China’s team of Wu, Ren Ziwei, Fan Kexin and Qu Chunyu took gold from Italy by less than two-hundredths of a second.

They were lucky to have made the final after only coming third in their semi-final, with only the top two making it through. However, a referee spotted an infringement by the US and Russian teams, which meant they were back in.

“We were all disappointed and a little confused,” said US skater Andrew Heo. “It was an interesting call, for sure,” added teammate Maame Biney.

Afterwards, Wu became emotional when discussing his family. “It has been a very difficult four years,” he admitted. “But we didn’t give up. I didn’t give up. Our families keep cheering us up, and providing us with the best support, even though we barely come home. I can’t imagine how they feel now.” Or the rest of China, for that matter.