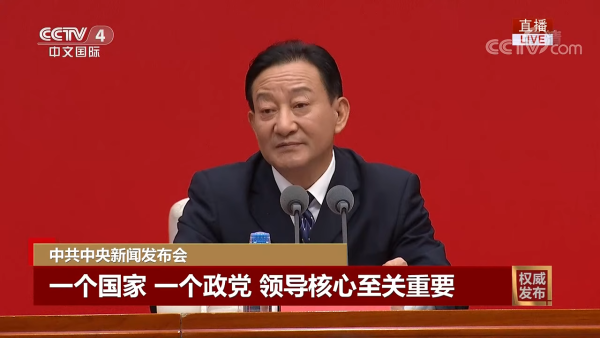 The extent of Wang’s input into the slogans and policies of the three successive administrations of Jiang Zemin, Hu Jintao and Xi Jinping prompted political scientists Haig Patapan and Wang Yi to write of him as a “Hidden Ruler” in a 2017 article in The Journal of Contemporary China.

Yet while Wang remains a member of the Politburo Standing Committee until next year, in October 2020 he relinquished the directorship of the CPRO. His place was filled by Jiang Jinquan, a former deputy, and a much less known bureaucrat.

Jiang has been especially prominent in the public eye of late. In the past two months, he has appeared in his capacity as director of the CPRO to praise China’s concept of “whole process democracy” and deride the U.S.-hosted democracy summit held on December 9-10.


On December 13 he wrote in the People’s Daily extolling Xi’s leadership achievements over the past nine years.

Jiang is widely seen as a weaker political mind than Wang. Whereas Wang attended and at age 30 became the youngest law professor at Shanghai’s elite Fudan University, Jiang was an economics graduate of a less prestigious college in Wuhan and spent his early career in the organization department of the Hubei government.

According to independent journalist Chen Pokong, Jiang’s elevation is indicative of Xi’s increasing distaste for contributions on political theory from intellectuals.

“Jiang is only four years younger than Wang,” Chen told The Diplomat in an interview. “And this gives rise to the question of why the turnover was necessary.”

“It means that unlike Wang, Jiang can be counted on to use his position simply to prove the correctness of Xi’s pronouncements. He doesn’t have the sophistication as a political scientist to refine or alter them.

“Xi’s approach is ‘I have a concept, you show that that concept is correct, and there’s no more to it.”

Jiang’s December 13 piece in People’s Daily was titled “Persist in the overall leadership of the party (in-depth study and implementation of the spirit of the Sixth Plenum of the 19th Central Committee).”

Reflecting on the Plenum’s focus on history, the piece mentioned Mao Zedong twice, Xi Jinping six times, but none of the other three former paramount leaders of the PRC by name.

In the same People’s Daily piece, Jiang wrote “under the conditions of reform and opening up… there was also a deviation in the content and methods of the party’s leadership. Only after the 18th National Congress of the Party was this eliminated.”

The article prompted U.S.-based political commentator Jiang Weiping to muse that Jiang Jinquan may have become “another Yao Wenyuan,” referring to the propagandist who upheld and prolonged the Cultural Revolution instigated by Mao Zedong.

As Xi prepares for the 20th Party Congress to be held in the second half of next year, he will probably continue to rely on Jiang and other carefully installed allies to further consolidate power for a third term as leader, many commentators agree.