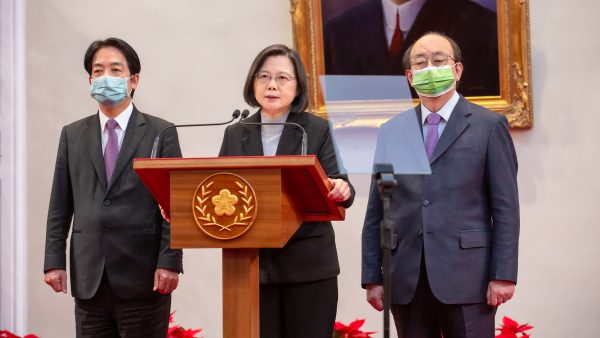 The results of the national referendum that was held on Saturday, December 18 in Taiwan led to a victory for the ruling Democratic Progressive Party (DPP), with all four referendum proposals voted down as the DPP had called for. However, turnout was not high enough that any of the referendum proposals would have been binding anyway had they passed. As a result, the referendum is perceived as a victory for the Tsai administration and a defeat for the opposition Kuomintang (KMT).

Current laws regulating national referendums in Taiwan require 25 percent of the eligible voter electorate to support a proposal, which would be around 4.96 million voters. Only 3.7 million voters were in favor of any of the proposals.

Historically, it was the DPP that had pushed for the lowering of benchmarks on national referendums. But after the KMT was able to use referendums to boost its electoral campaigning in 2018, the DPP passed changes that split the day that national referendums are held on from elections in July 2019. In fact, this was one of the referendum questions voted on, with a referendum proposal to again hold referendum votes on the same day as elections.

The other three issues voted on in the referendum were on the relocation of a liquefied natural gas (LNG) terminal planned to be built off of the coast of Datan, Taoyuan; reinstating barriers on U.S. pork imports; and the restart of nuclear reactor #4.

U.S. pork was another issue that the KMT and DPP traded positions on, with the Ma administration having proposed lifting barriers on the import of U.S. pork, and Tsai Ing-wen opposing this when the DPP served as the opposition. U.S. pork imports are controversial in Taiwan due to the use of the growth hormone ractopamine, which is not used in 160 countries worldwide.

The issue of nuclear reactor #4, then, was the only issue on which the DPP and KMT did not trade positions. The DPP has historically been closer with the environmental movement in Taiwan, with environmentalist groups having long taken the view that Taiwan’s frequent seismic activity makes the use of nuclear power dangerous, given the risk of a nuclear disaster along the lines of the 2011 Fukushima incident.

On the other hand, the KMT claims that nuclear energy is necessary to avoid energy shortages and to alleviate problems regarding air pollution. The KMT was likely hoping to push for a restart for nuclear reactor #4 as part of a broader push for nuclear power, having voted down plans to phase out nuclear power by 2025 in the 2018 referendum.

With the KMT and DPP having swapped positions on three of the four issues, what is notable about the voting results was how they reflected partisan politics in Taiwan.

With the DPP urging supporters to vote down all four referendum proposals and the KMT calling for approving all of the referendum proposals, more than 3.7 million voters were in favor of the proposals, while 4.1 million voters were against the proposals. The vote counts between the four questions did not substantially differ, suggesting that voters were voting along party lines rather than for specific issues they cared about. Indeed, the KMT framed the referendum vote ahead of time as a referendum not on four domestic political issues, but on the Tsai administration’s overall governance.

The Tsai administration has a stronger mandate going into 2022 midterm elections, then, with the KMT having experienced a defeat in the referendum. While President Tsai Ing-wen touted the referendum as a reflection of Taiwan’s democracy in comments made after the results were clear, KMT chair Eric Chu alleged foul play, lashing out at the “Birdcage Referendum.” This term is, interestingly enough, originally taken from pan-Green rhetoric criticizing the benchmarks needed to hold referendums as too high.

The KMT is likely to use referendum procedures as part of future attacks on the DPP, in line with recent claims by former president Ma Ying-jeou that Taiwan has become an “illiberal democracy.”

While Chu did not resign to take responsibility for the loss in the referendum, as might have been expected in an election defeat, KMT deputy secretary-general Lin Wei-chou tendered his resignation.

The KMT’s referendum campaign was notable in that New Taipei Mayor Hou You-yi, considered a frontrunner for the KMT’s 2024 presidential candidate, kept mostly out of the campaigning, possibly because he did not see the referendum campaign as likely to succeed. Taichung Mayor Lu Shiow-yen also kept out of campaigning. Some in the KMT blame Hou for the referendum defeat, which may hurt his chances of becoming the KMT’s presidential candidate in 2024.

The referendum on U.S. pork imports was particularly important from a diplomatic perspective. The Tsai administration lifted barriers on U.S. pork imports in 2020 in the hopes of jumpstarting trade talks, and eventually securing a trade agreement that would strengthen economic relations between the United States and Taiwan, so as to increase the economic incentive for Washington to defend Taiwan from China. Tsai took a major political risk by lifting these barriers, long a sticking point in Taiwanese politics, and something that provoked sharp backlash from the domestic pork industry.

In her comments, Tsai claimed that the referendum results showed the desire of the Taiwanese people to strengthen ties with the international world. DPP talking points around the issue of U.S. pork also suggested that Taiwan would be prevented from joining the CPTPP if U.S. pork imports were blocked, an argument that rather resembles KMT talking points under the Ma administration that Taiwan could not join the U.S.-led Trans-Pacific Partnership if it did not also ratify the Cross-Strait Services Trade Agreement.

While the United States may have been waiting for the results of the referendum to take action, it remains to be seen whether Tsai will be rewarded for taking this political gamble on U.S. pork.

The pork issue was the only major way that the China frame entered into the referendum – and that only in relation to political and economic ties with the United States. China and the larger issue of independence-versus-unification, traditionally the most salient cleavage in Taiwanese politics, was not the dominant frame for the referendum as a whole.

With the KMT and DPP having swapped political stances on a number of issues, the referendum campaign also points to new dynamics in Taiwanese civil society, with the KMT seen as co-opting groups that originally sought to steer clear of partisan politics. This includes not only environmentalists in Taoyuan opposed to the LNG terminal, but also “Autumn Struggle,” one of two major annual labor protests in Taiwan, which has visibly grown closer with the pan-Blue camp and reoriented itself around the U.S. pork import issue in the last two years.

Likewise, even had the KMT managed a referendum win, it is possible that the DPP would have shrugged off the referendum results, as it was accused of doing in 2018. Despite phasing out mandated goals to transition away from the use of nuclear energy by 2025, in response to the 2018 referendum results, the DPP still intends to keep to this goal.

As similar issues regarding Taiwan’s energy needs and food safety were also voted on during 2018 elections, we can expect similar issues to resurface in future referendums. The KMT is expected to continue to lean into accusations against the DPP of being undemocratic, and to frame future votes as being referendums on the Tsai administration’s governance. This will include the recall vote facing pan-Green independent Freddy Lim and the by-election vote to fill the seat formerly occupied by Taiwan Statebuilding Party legislator Chen Po-wei before his recall in October, both of which are scheduled to take place on January 9.