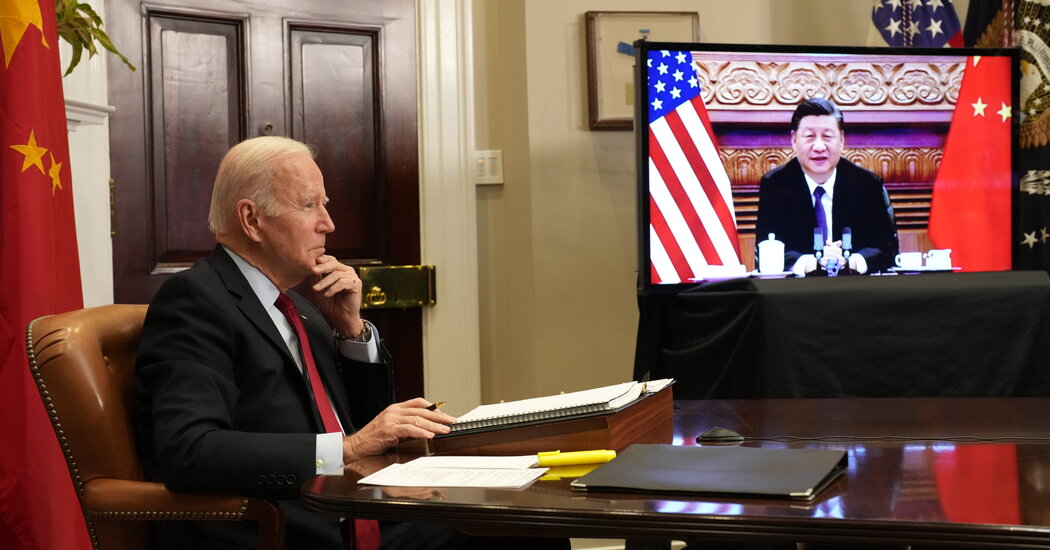 WASHINGTON — The United States and China announced an agreement on Tuesday to ease restrictions on foreign journalists operating in the two countries, tempering a diplomatic confrontation that led to the expulsion of some American reporters from China during the last year of the Trump administration.

The deal was first reported by China Daily, a newspaper controlled by the Chinese government, and later confirmed by a statement issued from the State Department.

Under the agreement, made public just a day after President Biden met with President Xi Jinping of China, three news organizations — The Wall Street Journal, The Washington Post and The New York Times — will be allowed to send journalists back to China, though it remained unclear whether the specific correspondents expelled last year will be permitted to return to work there.

“We are gratified their correspondents will be able to return to the PRC to continue their important work,” the State Department said in a statement, referring to the People’s Republic of China. “We welcome this progress but see it simply as initial steps.”

The United States, which had limited visas for Chinese journalists to 90 days, will provide yearlong visas for the foreign reporters, renewable annually. Both countries agreed to make it easier for journalists to come and go from the countries without fear of losing the ability to return to work.

Journalists for both countries will have to meet the standard eligibility requirements for visas under the laws of both countries.

American officials described the agreement as a result of months of negotiations aimed at resolving some of the escalating tensions between the two superpowers as they maneuver for economic power and public relations superiority around the globe.

“We will continue to work toward expanding access and improving conditions for U.S. and other foreign media, and we will continue to advocate for media freedom as a reflection of our democratic values,” the statement from the State Department said.

But it is unclear whether the deal — which White House aides said was not discussed when Mr. Biden and Mr. Xi met in a virtual summit on Monday — fully reverses the expulsion actions that China took against the three newspapers last March, as the coronavirus pandemic was just beginning to spread out of that country.

At issue is whether the veteran journalists for the three American news organizations who were ejected last year will be able to return to their former beats, allowing the newspapers to capitalize on their expertise and sources as they continue to document the actions of the Chinese government, business community and society.

Almar Latour, the publisher of The Journal, said in a statement that “we’re encouraged by the reported direction of these negotiations and continue to believe that independent, accurate reporting from within China serves our readers and serves China itself.”

Orville Schell, the director of the Center on U.S.-China Relations at the Asia Society, said the agreement reflected the serious effort made by diplomats in both countries to move toward a more workable relationship.

“They were trying to find some area where they could show some concrete progress,” said Mr. Schell, a former dean of the graduate school of journalism at the University of California, Berkeley. “They decided that this was a good one.”

China has for years sought to impose restrictions on American journalists who aggressively covered the government’s activities. Chinese officials shortened the length of visas for journalists working for American news organizations in an effort to dissuade the reporters from writing critically about the country for fear of being forced out.

But tensions over the issue of journalists intensified in early 2020, as former President Donald J. Trump escalated his rhetoric about the Chinese origin of the coronavirus and limited the number of Chinese citizens who were allowed to work in the United States for Chinese state-owned media organizations that are widely believed to be propaganda outlets.

The confrontation over journalists was part of a deteriorating relationship between the United States and China during the Trump administration, which clashed with Beijing over tariffs and other economic issues as well as Mr. Trump’s repeated condemnations of the Chinese government over the Covid-19 outbreak.

After initially saying that China had worked “very hard to contain the coronavirus,” Mr. Trump later repeatedly used the phrase “China virus” to describe its origins.

Mr. Biden has also taken a hard line with China, but has sought to dial back the rhetoric between officials. American officials said the virtual summit between the two leaders on Monday was designed in part to ensure that misunderstandings and heated rhetoric do not lead to outright conflict with China.

Mr. Schell, who helped facilitate conversations between State Department officials and leading journalists several months ago to discuss the issue, said Mr. Xi’s willingness to accept the new arrangement might indicate that he understands the importance of the news media, even in a country like China.

“They do recognize that to have any kind of an economic relationship you do need to have some sort of journalistic interchange,” he said, adding that such an arrangement between two countries has been seen before.