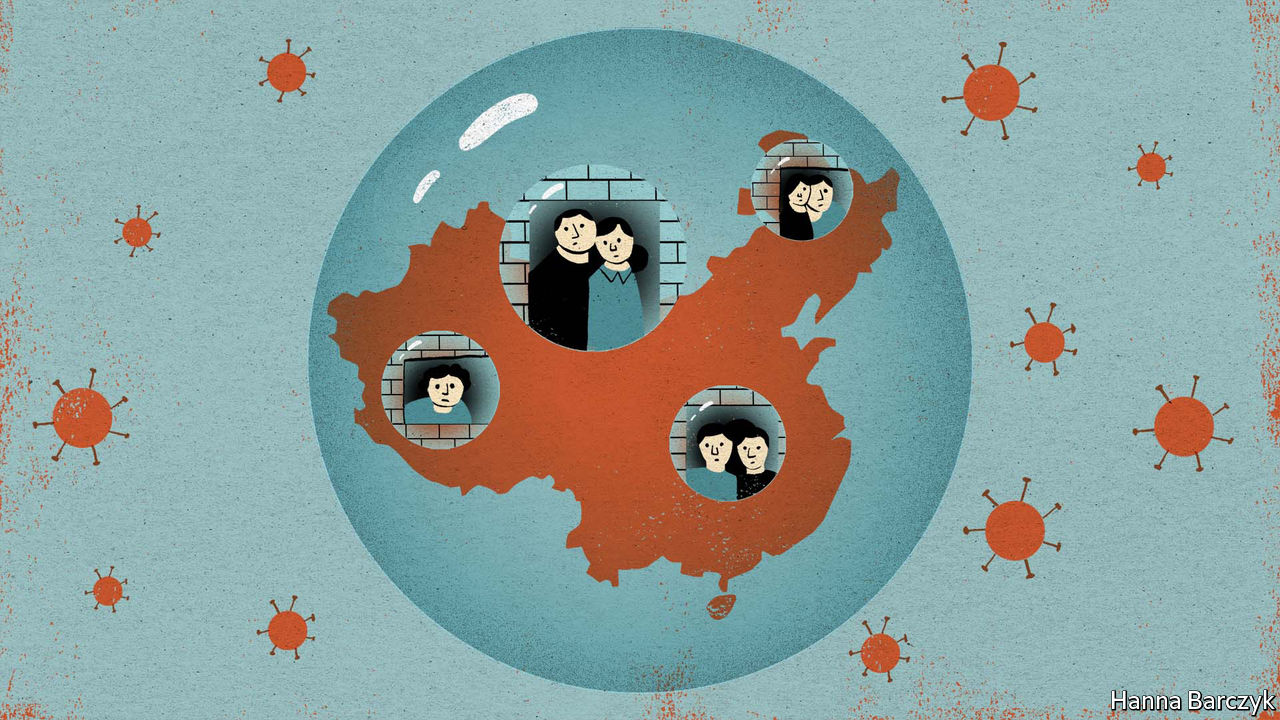 NEARLY TWO years into the covid-19 pandemic, China’s propaganda machine is locked in a futile argument with the outside world. The row is about whether this giant country is paying too high a price for its “zero-covid” policy. China’s attempts to eliminate the virus, rather than merely manage it, are certainly costly. They have largely closed China’s borders for 19 months. Dozens of city districts, towns and counties are enduring lockdowns as the highly contagious Delta variant and an early cold snap cause a flare-up of infections. There are several hundred cases of the disease nationwide. Many of them are local transmissions rather than imports from abroad, underscoring Delta’s perils. Controls include roadblocks manned by police in protective suits, closed schools, cancelled trains and testing of millions of residents.

With officials facing punishment for cases on their watch, grassroots harshness abounds. The northern city of Heihe has declared a “people’s war”, with rewards of up to 100,000 yuan ($15,600) for residents who report such pandemic crimes as illegal hunting. A county in Inner Mongolia locked nearly 10,000 tourists in hotels for two weeks to smother an outbreak. Two pharmacies in suburban Beijing lost their licences for selling fever-reducing medicines to a couple without logging their names in a virus-tracking database. The customers, who had earlier visited areas with covid cases and later tested positive, are being prosecuted for failing to report to a fever clinic. Citing possible transmission risks, officials in cities including Chengdu, Harbin and Wuxi entered the homes of quarantined locals and killed their pet cats.

Officials reject foreign reports that call such measures unsustainable. “It’s simply not right to question China’s efforts to eliminate the virus,” complained Xinhua, a state news agency, citing the country’s “robust” economy and calling travel curbs a “minor inconvenience”. Hu Xijin, the editor of a tabloid newspaper, says foreigners are jealous of China’s virus-fighting record, and charges that America has eased pandemic controls because it values “money over life”. In fact, the two sides are talking past one another if they focus on how strict zero-covid policies are. It is more relevant to ask who feels the pain from those controls. They are best understood as a giant utilitarian experiment. To help the majority enjoy an orderly, covid-free existence, a hapless minority—notably those who catch the virus or are suspected of contact with carriers—must sacrifice individual liberties, privacy and dignity.

A focus on the interests of the majority resonates with many Chinese. They remember images of chaos in Wuhan last year, as the virus overwhelmed hospitals in that city of 10m. They know that the health system is weaker outside big urban centres. Many doctors in rural clinics lack university degrees. Intensive-care beds are rare. American-style pandemic policies could have led to millions of deaths. As for closed borders, which cause anguish to expatriates and Chinese with family overseas, they do not greatly pain the 87% of the population without passports.

Many citizens of democratic countries would not tolerate half the rules imposed on China in this pandemic. But the collective sacrifices of the Chinese have produced something remarkable. In a country of 1.4bn people, the official total death toll from the pandemic is under 6,000, compared with almost 808,000 excess deaths in America, which has less than one-quarter of China’s population. Some scepticism of China’s statistics is reasonable, given that officials in Wuhan, where the outbreak was first detected, concealed the virus for weeks in late 2019 and early 2020. Yet if large outbreaks were still being concealed today, control systems would start breaking down, for they rely on tracking and tracing fresh cases. Instead, life in much of China is relatively normal.

Strictness for the greater good continues to enjoy unmistakable public support. But Chinese leaders do face a risk whenever public opinion suspects that overly harsh lockdowns actually serve the interests of a minority, ie, officials eager to cover their backs. There are signs of disquiet. Chengdu, for instance, recently broadened its pandemic controls, testing 82,000 people whose mobile telephones had spent ten minutes within 800 metres of a suspected case. Other cities have started copying this approach. But on November 8th two leading epidemiologists and a doctor in Chengdu wrote an open letter warning pandemic officials that such mass testing must be guided by science, and risks causing panic. That officials keep talking about punishing rule-breakers is a sign of at least some public fatigue. It also risks driving the weary to hide from the authorities.

The party calls pandemic control proof that it loves the people

To maintain support, strict controls must be seen to benefit everyone, though a minority will feel the most hardship. Foreigners in China, yearning for borders to open, often suggest that the sight of normality in the rest of the world will soon make Chinese citizens restless. For now, state media keep such envy at bay by presenting the West as a death-stalked hellhole. An online video promoted this week by state media is filled with images of Donald Trump when he was America’s president, and the chaos abroad of those days. It calls American travellers “walking vectors of contagion”.

To date, zero-covid’s worst effects have been felt by luckless minorities, from locked-down residents to those whose livelihoods depend on free movement within and outside China. Fear, and the stigma endured by those who catch the virus, have ensured compliance with orders. Harsh policies have bought China’s leaders time, as they wait for potent vaccines and antiviral drugs that might let them open up safely. Officials have arguably slowed an exit by refusing to approve foreign vaccines that are more effective than China’s, in their eagerness to prove the superiority of one-party rule over Western democracy. Further mutations of the virus may one day challenge China’s strategy. If they make lockdowns more frequent, the ranks of the unlucky will grow.■