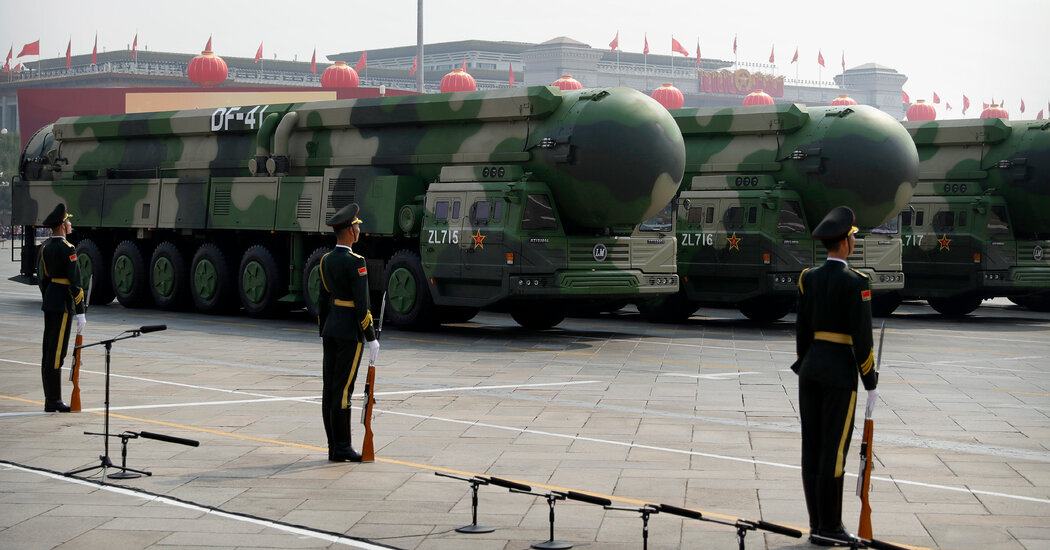 WASHINGTON — China is continuing to strengthen its strategic nuclear arsenal and could have 1,000 nuclear warheads by 2030, according to a new Defense Department report released Wednesday.

The Pentagon’s annual report to Congress on China’s military might estimates that China could have 700 deliverable nuclear warheads by 2027 and 1,000 three years later. In addition, it warns that China has “possibly already established a nascent nuclear triad with the development of a nuclear capable air-launched ballistic missile and improvement of its ground and sea-based nuclear capabilities.”

Even with the accelerated nuclear expansion, Beijing is still behind the United States, with its nuclear stockpile of 5,550 warheads, and Russia, which has 6,255, according to the Stockholm International Peace Research Institute, an independent organization. China has about 350 nuclear warheads, the organization said.

But Beijing has refused to join arms control talks, arguing that its nuclear arsenal is far smaller than those of the world’s two major nuclear powers. At the same time, it has pursued a broad military modernization program that has raised questions about its intentions.

The American military’s most senior officer said on Wednesday that he views China as the “No. 1” nation-state military challenger to the United States. The comments, by Gen. Mark A. Milley, the chairman of the Joint Chiefs of Staff, during a discussion moderated by NBC’s Lester Holt at the Aspen Security Forum, came a week after he characterized China’s recent launch of a hypersonic weapon designed to evade American defenses as a near “Sputnik” moment, in an allusion to the Soviet launch of a satellite in 1957, which spooked the American public and helped spur the nuclear arms race during the Cold War.

China, General Milley said on Wednesday, is “clearly challenging us regionally, and their aspiration is to challenge us globally.” He added that “they have a China dream, and they want to challenge the so-called liberal rules-based order.”

Asked if the United States could “match” China’s hypersonic capability, General Milley declined to answer. But he said later that “if we in the United States don’t do a fundamental change ourselves, then we will be on the wrong side of a conflict.”

General Milley said the United States “absolutely” could defend Taiwan from an attack by China if — and that part is a big if — political leaders decided to do so. Such a decision by any American president would be a huge shift, since the United States for decades has followed a policy of “strategic ambiguity” that leaves open the question of whether the United States would back Taiwan in a military conflict with China. General Milley did not veer from that policy on Wednesday.

He said he did not expect China to take military action against Taiwan in the next 24 months. But when pressed on whether the Pentagon could defend Taiwan, he said that “we absolutely have the capability to do all kinds of things around the world, to include that, if required.”

On China’s reunification with Taiwan, he added that “the Chinese are clearly and unambiguously building the capability to provide those options to the national leadership if they choose at some point in the future.” China considers Taiwan a breakaway province.

China’s most recent defense strategy, released in 2019, said it would keep its “nuclear capabilities at the minimum level required for national security.” Beijing has also vowed not to use nuclear weapons first or against any non-nuclear state.

Perhaps surprisingly, the Pentagon report makes little mention of the coronavirus pandemic, which began in China in 2019 and spread globally, killing more than 5 million people so far and infecting millions more.

The Pentagon report also backs General Milley’s account of his phone calls with his Chinese counterpart in late 2020 to reassure China that the United States under President Donald J. Trump had no intention of attacking. According to the report, the calls came at the direction of Mr. Trump’s secretary of defense at the time, Mark T. Esper, whom Mr. Trump would later fire.