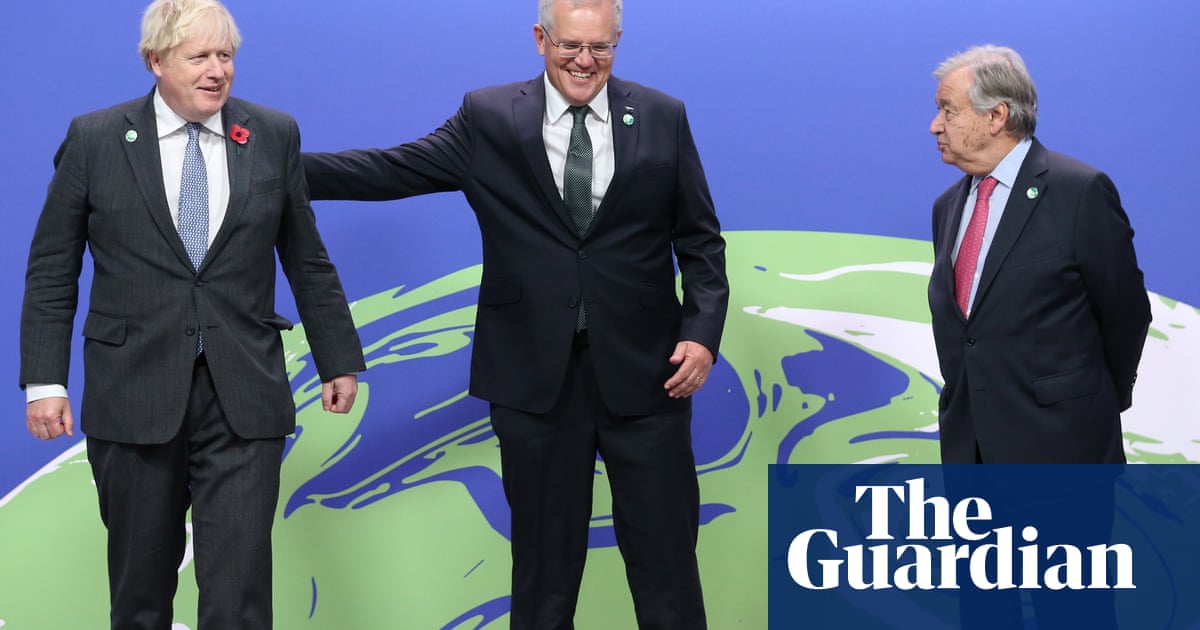 Scott Morrison has used his national statement at the Cop26 to emphasise that Australia will probably overachieve on its 2030 emissions reduction target in an effort to blunt international criticism about his government’s lack of climate ambition.

While the lead-up to the Glasgow summit was dominated by Morrison’s negotiations with the National party to land a net zero commitment by 2050, the UN-led event is focused on ambition for the 2030s.

Australia – part of a bloc of big emitters and exporters at last weekend’s G20 summit in Rome attempting to water down commitments in the final communique to phase out coal – has been criticised for not increasing its ambition in the critical decade.

Morrison used his set-piece address to the Glasgow conference to tell his peers that Australia had submitted a new nationally determined contribution, noting that Australia’s emissions would “fall by 35% by 2030, far exceeding our Paris commitment”.

For 2030, the new NDC says: “Australia reaffirms its ambitious economy-wide target to reduce greenhouse emissions to 26-28% below 2005 levels by 2030, and will exceed it by up to 9 percentage points”.

The updated NDC also said Australia would adopt an economy-wide target of net zero emissions by 2050 “covering all sectors and gases included in Australia’s national inventory”.

In the lead-up to Cop26, under pressure from key allies, including the summit host, Boris Johnson – Morrison attempted to increase Australia’s Abbott-era 2030 target to something more in line with the updated projections, which say a 35% reduction is possible.

But that effort was vetoed by the National party. The agreement to adopt net zero also went down to the wire.

While a number of leaders used their opening contributions to the Glasgow summit to issue stark warnings about the existential risks associated with failing to mitigate the risks of runaway global heating, Morrison struck an upbeat note.

In statements to the conference on Monday, the UN secretary general, António Guterres, said optimistic assessments of progress on tackling the climate crisis were “an illusion” while the British prime minister likened the current position of the world to a scenario in a James Bond film.

Boris Johnson said a common plot device in the spy thrillers was 007 “strapped to a doomsday device, desperately trying to work out which coloured wire to pull to turn it off while a red digital clock ticks down remorselessly to a detonation that will end human life as we know it.

“And we are in roughly the same position, my fellow global leaders, as James Bond today, except that the tragedy is that this is not a movie, and the doomsday device is real.”

But Morrison declared there was “cause for optimism”. Australia’s prime minister told leaders 18 months ago the world was “staring into the abyss of a one in one hundred years pandemic”.

“The vaccines we would need had not only not been invented, but there had never been a vaccine for a coronavirus,” the prime minister said. “But here we are. Billions vaccinated and the world is reclaiming what Covid has taken from us.

“The challenge of combating climate change will be met in the same way, and it will be met by those who are largely not in this room.

“It will be our scientists, technologists, engineers, entrepreneurs, industrialists and financiers that will chart this path to net zero – and it is up to us as leaders to back them in.”

Morrison’s predecessor as prime minister, Malcolm Turnbull, said Australia’s technology-based approach and refusal to do more by 2030 had been “received badly” internationally.

Speaking from Glasgow, Turnbull said the goal of the conference was to increase 2030 commitments and that Morrison had not done that was “a very big disappointment” . He said Morrison should not expect credit for claiming a projection that Australia would do more to cut emissions by 2030 but not formally committing to do it.

“Projections do not provide any commitment or determination… a projection is just a guess,” Turnbull told the ABC’s RN Breakfast.

Hopes that the Glasgow summit will yield more ambitious pledges have been dampened by the failure of G20 countries to reach a consensus on key commitments in Rome last weekend.

The Rome summit – staged as a precursor event for Glasgow – wound up with a communique that did not include a firm commitment to achieve net zero carbon emissions by 2050, and had only a vague commitment to “phasing out investment in new unabated coal power-generation capacity … as soon as possible”.

China’s president, Xi Jinping, is not attending the Glasgow conference. In a written statement to the Cop, China – the world’s biggest emitter – called on developed countries to “provide support to help developing countries do better”.

According to a text of his statement published by the Xinhua news agency, the Chinese president stressed the responsibility of developed countries in tackling climate change, saying that they should not only do more themselves, but should also provide support to help developing countries do better.

China has not made any new significant commitments. India has now pledged to meet a target of net zero emissions by 2070.

India’s prime minister, Narendra Modi, unveiled five pledges on Monday. The country will increase its non-fossil fuel energy capacity to 500GW by 2030 and get half of its energy from renewable resources by the same date.

Modi said India would reduce its projected carbon emissions by 1bn tonnes between now and 2030, and reduce the carbon intensity of its economy by 45%.

The US president, Joe Biden, told the conference the world only had a limited window to deal with the climate crisis. He said his country was“back at the table” of international climate action, and intended to lead by example.

Biden’s decision to return the US to the Paris agreement spurred a round of ambitious climate pledges from other world leaders earlier in 2021. But he is struggling to secure legislative approval for his policy agenda at home.