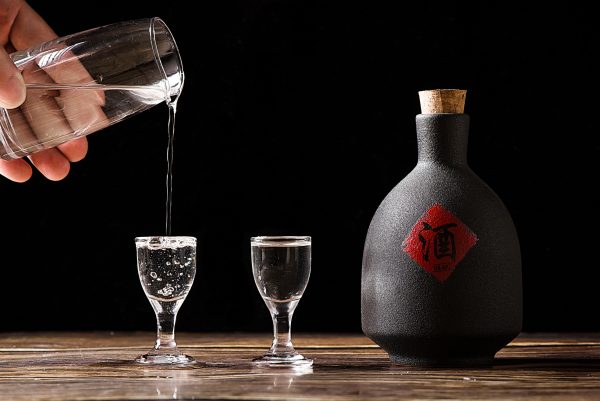 An old Chinese proverb says that “A thousand glasses of liquor among bosom buddies is too few.” Drinking rituals are fundamental to the social, political, and business fabric of China, and according to the historical record, they have been for thousands of years.

China Daily traces China’s use of alcohol back 4,000 years. According to legend, it was a woman, Yi Di, wife of the semi-mythical King Yu, who “invented the method” by which to make alcohol.

Sources differ widely, though, on exactly how many thousands of years alcohol has had a presence in China. The website DrinkBaijiu claims that China’s sojourn with alcohol goes back more 9,000 years: “Nine thousand years ago in Jiahu, Henan Province, people brew[ed] a drink from rice, honey, grapes and hawthorn fruit. It is the world’s oldest known alcoholic beverage.” (Several other countries, including Britain, would contend that, as they claim the honor of “world’s oldest known alcoholic beverage” for themselves.)

Many nations have a distinct drinking culture, but perhaps nowhere rivals China for the degree to which drinking alcohol has become so much a part of the fundamental landscape of the nation. The traditional white and yellow liquors of China are national treasures. And while never actively encouraging youth to drink, China, until the 21st century, did not have a law regulating the age at which people can begin to drink alcohol.

I have experienced the phenomenon of “work drinking” — drinking Chinese liquors during banquets and celebrations — hundreds of times throughout the years and the many distinct regions of China. Usually, it is a fairly benign evening, with no appreciable harm to anyone. However, a recent case of a young woman who experienced sexual abuse at Alibaba as the result of being forced by social convention to participate in a drinking session that she could not physically withstand has exposed the dark side of this excess. As a result, the custom is coming under increasing scrutiny and conversation among some sectors in China.

On the surface, there can be positives. I once saved a client’s manufacturing project by drinking far too many shots of rice wine at a banquet with the heads of nine departments of the municipal power company. Initially, the client was facing a six-month wait for sufficient power to be brought into the facility. Three days after the banquet, a notice came that “the situation had improved,” and the installation would begin within the month, which it did. Those shots of liquor, and the relationship developed at the same time, saved the client five months of downtime and hundreds of thousands of dollars in lost revenue.

On a different trip to Sichuan province as the sole foreign representative of my company for an event celebrating the digital telephone network which we had installed, I thought I might be spared an evening of shots followed by a morning of regret. It was not to be. Knowing that I was on my own, officials arranged for three very fit, fully-uniformed women soldiers from a local base to join the dinner for the sole purpose of being my partners in drinking Chinese 80-plus proof liquor together.


Another aspect of the ritual of work drinking is that it allows ordinary guests to have access to the VIPs at the event. Since the tradition encourages people to leave their own tables with sufficient stores of liquor in hand and go from table to table toasting other stakeholders, people often end up at the head table and have a brief moment of egalitarian drinking with the bosses and the top officials. And very often, those top officials will not stand on ceremony waiting to be toasted; they, too, will make the rounds to thank the rank-and-file, showing at least some semblance of humility in doing so.

Work drinking, then, works. For all that one can moralize about its harmful effects and its suspicious similarity to a college drinking party, it is a mechanism that lets people enjoy a bit of banter, test one another’s resolve, and have at least a moment with those of different status. For those who perform this ritual competently, it can be a career booster. Receiving a compliment for handling one’s alcohol well is considered a high honor in China.

The problem is that many Chinese, indeed many people in East Asia, both male and female, have a deficiency in a particular enzyme – aldehyde dehydrogenase deficiency, to be specific – that prevents them from processing alcohol well, or at all.  When such a person feels forced to drink, they don’t do well and often pass out quickly. In this comatose state, such people are easy prey for the unscrupulous – and women, especially, are at risk of sexual abuse.

Under normal circumstances, women have an easier time of bowing out of drinking than men. The exceptions are women who are in positions of leadership within an organization, and who are therefore key to securing the relationship with parties at the table. If their counterpart – for example, their customer’s director, CEO, or even a party secretary – is at the table, and a woman is the account lead, she must drink with him, and with his colleagues.

Here is where the pressure comes in: It is absolutely true that a woman could be removed from her position for not drinking under those circumstances (for that matter, a man would face the same threat). Being unwilling or unable to drink with the guest at the table causes a huge loss of face for that guest, which must be remedied.

The paradox, then, is that the better a woman does in her career, the more she will feel the need to submit to drinking herself into delirium during business dinners, which can be frequent.

A female deputy party secretary who supported my client’s projects in her city would match any man at the table drink for drink and then some. She engaged in these sessions five to seven nights a week, often going to multiple banquet rooms in the same restaurant, to drink with multiple clients. As the second most powerful person in her city of half a million, a word from her could seal or deny any company’s project.

I asked her how she did it and could still get up the next morning to go to work. She replied that for some reason she had an unusual tolerance for alcohol. That, she told me, was one of the very reasons she was offered the official position in the first place: The municipal Communist Party gave her the job of number two in the city largely because she could drink.

Today, there is push-back against the work-drinking culture, both from society at large, as well as from the CCP itself. As the Financial Times reported, “The Central Commission for Discipline Inspection, the Chinese Communist party’s anti-corruption watchdog, said pressure to drink could lead to crimes and such practices should be replaced with ‘correct values’, according to a commentary on its website.” The CCP has also attempted to crack down on mass purchases of expensive alcohol at work banquets as part of its anti-corruption campaign. A single bottle of Maotai, China’s national liquor, can cost thousands of dollars.

It is to be hoped that modernizing these traditional drinking practices will lead to greater safety for the vulnerable in business, political, and social situations in China. That the discussion is happening at all, both in social media as well as in the CCP, is already a step in the right direction.

There is something to be said, however, for leaving room for the ritual to survive – as long as excess, shaming, and actual physical harm are removed from the equation. After all, protecting the best parts of a 9,000-year-old tradition can certainly be considered cultural preservation.