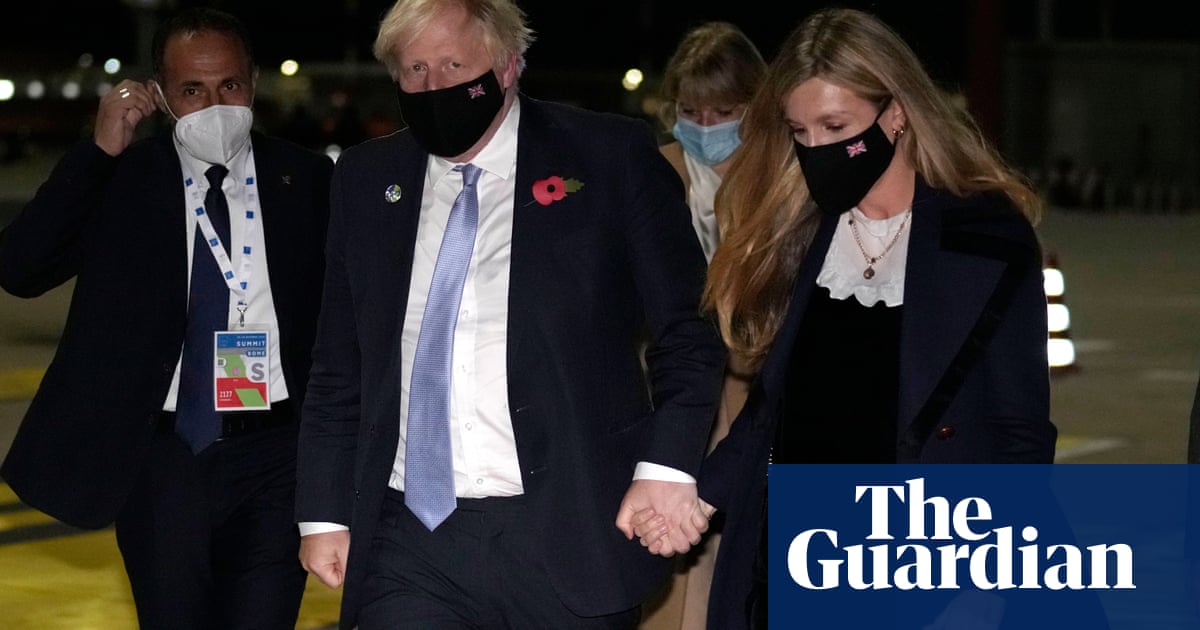 World leaders have been warned that Cop26 must “mark the beginning of the end of climate change” amid last-minute talks that could help determine the future of the planet.

With the long-awaited environmental summit due to start on Monday, Boris Johnson issued his plea while saying “too many countries are still doing too little”.

Speaking en route to Italy to meet other prime ministers and presidents from the G20 group of industrialised nations, Johnson said that without action the modern world could suffer the same fate as the Roman empire and go into dramatic decline.

“Humanity, civilisation, society, can go backwards as well as forwards, and when things start to go wrong they can go wrong at extraordinary speed,” he said.

“You saw that with the decline and fall of the Roman empire, and I’m afraid to say that it’s true today that unless we get this right in tackling climate change, we could see our civilisation, our world also go backwards.”

Saying he had pressed China’s president, Xi Jinping, about his country’s use of coal during a phone call earlier on Friday, he likened the situation to a football match in which humanity is “5-1 down at half-time”.

The principal aim of the conference will be to commit countries to holding global temperature rises to 1.5C – and a failure to do so could lead to irreversible changes, one of the world’s leading climate scientists said.

Prof Johan Rockström, the head of the Potsdam Institute for Climate Impact Research, said Cop26 could not be treated like other political negotiations.

“A rise of 1.5C is not an arbitrary number, it is not a political number. It is a planetary boundary. Every fraction of a degree more is dangerous.”

While Johnson has faced criticism this week for his own inaction over tackling emissions – with Wednesday’s budget again freezing fuel duty, and cutting levies on shorter, domestic flights – he arrived in Rome bearing a blunt message for fellow G20 leaders.

“Too many countries are still doing too little,” the prime minister’s spokesperson said, setting out the message that will be delivered.

“As the countries with the greatest historic and modern contributions to global warming, who have built their economies on the backs of burning dirty fossil fuels, the G20 holds the key to unlocking global action and making the progress we so badly need to live up to our commitments.

“While G20 countries are overwhelmingly responsible for the problem, it is poorer nations who are already feeling the consequences. On Monday, G20 leaders will come face to face with leaders from those countries at Cop26 and will have to account for their actions. If we don’t act now, it will be too late.”

In Rome, Johnson is expected to prepare the ground for the climate summit by demanding “concrete steps on coal, cars and trees so we can keep 1.5 alive and stay on track for net zero”, his spokesperson said. The spokesperson referred to the government’s hope to maintain the possibility of keeping global warming limited to 1.5C above pre-industrial levels, as set out in the 2015 Paris climate agreement.

Johnson will hold bilateral talks with Scott Morrison, the Australian prime minister, whose own record on reducing emissions has been heavily criticised, as well as Canada’s Justin Trudeau and Italy’s Mario Draghi.

Johnson is not due to hold a one-on-one meeting with Joe Biden, the US president, who will be at the G20 and Cop26, although the pair will attend a meeting in Rome about the Iran nuclear deal.

Also attending will be the French president, Emmanuel Macron, and the German chancellor, Angela Merkel, who is expected to bring along her likely successor, Olaf Scholz, currently the finance minister.

The UN secretary general, António Guterres, underlined the importance of the G20 summit and the Glasgow conference, saying “there is a serious risk that Glasgow will not deliver”.

“If we want real success and not just a mirage, we need more ambition and more action,” Guterres said on Friday.

“That will only be possible with a massive mobilisation of political will, and that requires trust among the key actors,” he said, adding that such trust was in short supply.

Johnson will fly straight to Glasgow from Rome, where he will officially open Cop26 on Monday by delivering a keynote speech. An estimated 120 world leaders from 196 countries are expected to attend, along with 30,000 delegates.

The PM is to present the summit as a last chance for humanity to begin to tackle the climate emergency, with his spokesperson calling it “a critical moment for world leaders to demonstrate they can show the climate ambition needed”.

As well as his opening speech in Glasgow, Johnson is also scheduled to host a roundtable on “action and solidarity”, bringing together the leaders of major emitters and climate-vulnerable nations.

A series of scheduled bi-lateral meetings include appointments with Narendra Modi, the Indian president, and the leaders of Egypt, Indonesia, Japan, Bangladesh and Democratic Republic of the Congo.

He will leave Glasgow later on Tuesday – leaders tend to only attend Cop summits at the beginning – and thus far has no plans to return at the end, on 12 November, although that possibility is being held open.

Protests took place in 26 countries on Friday, specifically targeting the financial centres of the largest economies around the world.

The Swedish activist Greta Thunberg joined demonstrators at a “climate justice memorial” in the City of London on Friday.

“As long as we keep ignoring the historical responsibility of the countries of the global north and as long as we continue to ignore it, the negotiations will not have a successful outcome,” she said.

Ahead of Cop, Downing Street announced a £160m fund to finance the development of floating offshore wind facilities in Wales and Scotland, part of a wider plan to increase the UK’s sustainable energy provision.

A separate announcement outlined plans to donate an extra 20m Covid vaccines to the World Health Organization’s Covax scheme, which distributes them to poorer nations.