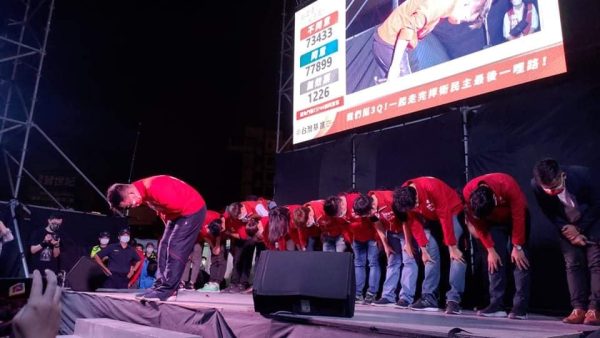 Chen Po-wei of the Taiwan Statebuilding Party (TSP) was recalled by what proved to be a close vote in Taichung on Saturday, October 23rd. There were 77,899 votes in favor of Chen’s recall, versus 73,433 votes against. Turnout was high, with 51.72 percent of eligible voters participating. Only 25 percent participation was needed for the vote to be binding.

The TSP, formerly known as the Radical Party, is a youth-oriented third party that heavily emphasizes Taiwanese identity. Though the party’s establishment predates the 2014 Sunflower Movement – which involved the month-long student-led occupation of the Taiwanese legislature in protest against a trade deal that was to be signed with China – it was one of the “Third Force” parties that rose to prominence after the movement.

The TSP defines itself as a “left independence” political party but was probably the most focused on Taiwanese identity among the Third Force. In particular, the TSP advocated taking a stronger stance on progressive and pro-independence issues so that the Democratic Progressive Party (DPP) would not have to, allowing the DPP’s views to seem more centrist and acceptable to the political mainstream by comparison. As a legislator, Chen was known for strident views against Chinese influence in Taiwan.

While some Third Force parties did not wish to align with the DPP, viewing the party as having become corrupt from its years in office during the Chen Shui-bian administration, the TSP was not opposed to working with the DPP. But unlike the New Power Party, which won five seats in Legislative Yuan in 2016, the TSP struggled to win any legislative seats until 2020, when Chen took office.

Chen, at age 36 and with a background in the film industry, defeated incumbent Yen Kuan-heng of the KMT, who had served as a legislator since 2013. Yen is the son of Yen Ching-piao, who previously held the seat that his son took over from 2002 to 2013.

The Yen family is often seen as having dominated Taichung politics in past decades. Yen Ching-piao, widely known as a gangster, has a long criminal record, including attempted murder, corruption, and firearms offenses. However, this did not prevent Yen from being elected to legislature from jail in 2002 – not the first time in Taiwanese politics that politicians serving jail sentences have been elected to office, as seen with Hualien legislator and former county magistrate Fu Kun-chi, previously a member of the KMT and the People First Party.

Yen also serves as the head of the Dajia Jenn Lann Temple, where the Dajia Mazu pilgrimage, Taiwan’s largest religious event, begins. Under his leadership, Yen sought to strengthen religious ties with China through the Mazu pilgrimage, seeing as Mazu is originally a deity from China. In this way, the Yen family stands at the intersection of organized crime, religion, and electoral politics in Taichung.


Chen’s 2020 victory was seen by many progressive young people as representing a break from the KMT’s political corruption in Taichung, as Chen was not from a political dynasty and had no prior history of corruption. By the same token Chen’s defeat is understood as a sign that the KMT’s hold over local politics is far from broken, even as the KMT has struggled to win presidential elections and the party has experienced successive internal crises over the fact that it has alienated a generation of Taiwanese young people due to its stance regarding unification with China.

The KMT framed the recall vote against Chen as a referendum on the DPP’s governance. Eric Chu indicated that the KMT would frame the recall vote that way shortly after his victory as KMT chair in September. It may not be surprising, then, that DPP and other pan-Green politicians rallied in support of Chen in the weeks before the recall vote.

Chu has suggested that the KMT may back recall campaigns against other young, progressive legislators such as independent Freddy Lim in Taipei. The KMT may increasingly view recall campaigns as an effective strategy for targeting opponents, particularly as politicians such as Chen or Lim are seen as having weaker ties in their local constituencies even as they are active on national-level political issues.

Indeed, many younger politicians that entered politics after the Sunflower Movement hold office in areas that have historically leaned toward the KMT’s pan-Blue camp. Under the Tsai administration, the DPP has adopted a strategy of not running its own candidates in such areas and instead allowing young independents or members of pan-Green third parties to try their hand at seeking office.

The KMT’s use of recall, as well as national referendums, against the pan-Green camp is in some ways ironic. It was originally progressive pan-Green politicians that emerged after the Sunflower Movement that called for lowering the benchmarks needed to hold recalls or to launch national referendums, with the view that this could be to remove from office corrupt pan-Blue legislators that have held their seats for decades, or be used to settle national issues regarding Taiwan’s international status or nuclear energy. But in the years after benchmarks needed to hold recalls or referendums were lowered, it has been more common for such measures to be used against the pan-Green camp by the KMT, leveraging its mobilization networks across Taiwan.

Chen was originally targeted as part of “revenge recalls” against young pan-Green politicians that supported the recall vote against Kaohsiung Mayor Han Kuo-yu of the KMT in June 2020.

Han was the KMT’s 2020 presidential candidate and, following his defeat, he was recalled by overwhelming margins in Kaohsiung, with 42.14 percent turnout and 97.4 percent of those that participated voting in favor of Han’s recall. Nevertheless, recall campaigns launched in retribution against Kaohsiung independent city councilor Huang Jie, Taoyuan DPP city councilor Wang Hao-yu, and Chen Po-wei have now resulted in the latter two being removed from office.

In response to recent developments, the pan-Green camp has pushed for changes to recall rules, including lowering the voter participation threshold needed for the vote to be binding from 50 percent to 25 percent. It’s worth noting, though, that even had the rules not been changed, Chen would still have been recalled.

Since Chen’s recall, there has been some discussion of whether there will be further “revenge recalls” in the future. At the same time, even if the KMT does intend to use recall votes to target opponents – especially young progressives – going forward, targeting Taiwan’s most prominent youth politicians may not help a party that hopes to turn its image around to win back the support of young people. The recall vote against Chen was termed a “generational conflict” in some domestic political discourse. Similarly, backing and fielding politicians with as checkered political records as members of the Yen family may not exactly help the KMT’s reputation either.

A by-election will subsequently be held to determine who fills Chen’s seat, at a date to be decided. This, too, is likely to be fought over between the pan-Blue and pan-Green camps.