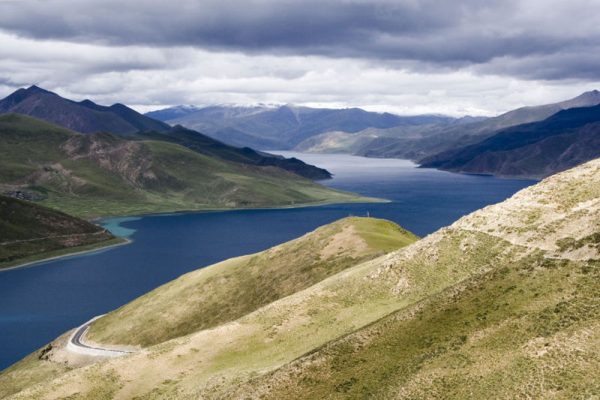 The Red Flag River Water Diversion Project Proposal (Red Flag River) is a new enormous inter-basin water diversion proposal in China. It is not an official project and has not received approval from the Chinese government; however, since the semi-official release of the proposal in November 2017 by the S4679 Research Group, it has attracted plenty of attention. The proposal aims to annually divert 60 billion cubic meters of water from the major rivers of the ecologically fragile Qinghai-Tibet Plateau, including three transnational rivers (Mekong, Salween, and Brahmaputra), to arid Xinjiang and other parts of northwest China.

As a transboundary project, the Red Flag River proposes to not only cross several provincial borders in China, but to also reduce the flow of these transnational rivers. This has has raised concern. How much more power could this project proposal give China, an upstream country and the regional hydro-hegemon, over many of Asia’s major rivers? So far, scholars in China have expressed various hydrological concerns over the Red Flag River, as has India, while the other downstream countries are yet to publicly speak about their concerns related to this project proposal.

However, the project proposal is missing one crucial element that is necessary: information sharing with the many downstream countries whose access to the shared water resources may be affected. In this article, we argue that the S4679 Research Group must include the downstream countries in consultations, because they matter considerably.

China’s relationships with its neighboring countries are of vital significance to its national security. Maintaining proper dialogue with neighboring countries has been the Chinese government’s official foreign policy and approach. However, the ongoing proposal research on the Red Flag River has not been made public. Consultations or information sharing dialogues held between China and the relevant downstream countries are yet to be reported. Ignoring the downstream region, however, may cause unnecessary tension between China and the relevant South and Southeast Asian countries.

Upstream-downstream water conflict is universal and nothing new. Even within China, water conflict between upstream and downstream regions occurs between various provinces that fight for access to and control of shared water resources, such as over the Yellow River.

However, the potential upstream-downstream conflicts from the Red Flag River proposal are likely to be even more serious. In transnational water conflicts, the most upstream nation may control the flow and majority of transboundary water resources, much to the detriment of the downstream nations that also depend on the same water resources. The more powerful riparian nation may also be able to use various political, economic, and military tools to govern relations with the less powerful neighboring nations. This can result in a major power imbalance in favor of the dominant nation, which controls the access to and quantity of water resources over smaller, weaker nations.

If the Red Flag River is built, how would the downstream region’s access to water be affected? Could China use it to “turn off the tap” to reduce or halt entirely the water flow from the transnational rivers to the downstream countries?


In an extreme case, China could impose forceful water diplomacy against the other riparian nations, holding 25 percent of the world’s population hostage by using water as a coercive weapon to reduce or halt entirely the water flow from these transboundary rivers to the many downstream countries. To ally these fears, China could include Red Flag River consultations as part of both its broader foreign policy and initiatives with neighbors.

For comparison, the enormous Three Gorges Dam, the world’s largest power station in terms of installed capacity, holds less than 1 percent of the Yangtze River’s total discharge. As a power station designed to control the flood of the Yangtze, it has little impact on the downstream flow. In contrast, the Red Flag River is an enormous domestic cross-basin water proposal. Unlike a dam, which stores water before releasing it, water diversion represents an absolute net loss. This means that the project proposal plans to take a significant amount of water from shared water resources and not return it. Hence, the Red Flag River’s proposed diversion of 21 percent of water from the upper streams of three transnational rivers (Mekong, Salween, and Brahmaputra) may be seen as a controversial issue.

Based on our calculations, the proposed 21 percent diversion from the upper streams of three transnational rivers is actually quite small in terms of their overall flow. This suggests that the estimated net loss from each of the three transnational rivers is not as severe as originally thought. Nonetheless, communication with the downstream countries is necessary to emphasize these points.

If it becomes an official project and is constructed, the Red Flag River will have enormous implications for the region. With strong fears of water insecurity throughout Asia, how can China balance domestic water challenges, such as supplying enough water for its growing population and industries, while facing international competition from the downstream countries, where there is also increasing demand? The downstream countries are also likely to become increasingly concerned by the Red Flag River’s diversion of shared transnational water resources for China’s own benefit.

Some of the downstream countries, such as Vietnam, are already increasingly concerned by what they see as China’s desire for military, technological, political, and economical regional dominance and the asymmetric power balance between China and the many downstream countries. The Red Flag River would likely be seen by the downstream region as an extension of China’s activities in South and Southeast Asia and is likely to be viewed with great caution by the downstream region. The downstream nations may also fear that the Red Flag River will force them to fight against each other and against China to secure access to water resources.

To avoid such water insecurity fears – and also pre-empt the publication of additional exaggerated media reports on the potential hydrological impacts of the Red Flag River – China could consider including the downstream region when planning and building mega hydro-engineering projects. Although internal domestic upstream-downstream conflicts can be resolved by the relevant national authorities, transnational water projects need further dialogue to avoid disputes and conflicts.

One possible solution is for the senior scientists of the Red Flag River’s S4679 Research Group and their counterparts in the downstream countries to hold consultations on the project proposal. Made up of Chinese academicians, professors, and young scholars, S4679 Research Group is led by Tsinghua Professor Wang Hao. An academician of China’s Academy of Engineering, Wang also serves as the engineer-in-chief of China Institute of Water Resources and Hydropower Research and the chair of the Expert Group on Dialogue for the “Red Flag River Issue.” He has been a core member of the Counselor Advisory Committee of China’s Ministry of Water Resources.

Taking into account that the Red Flag River could be a geopolitically sensitive proposal due to the lack of consultation, it is recommended that the senior scientists like Wang, from both China and the downstream countries, could set up regular meetings or even a “Red Flag River Commission” to share data on transnational rivers. Such conferences could bring together water experts, environmental scientists, and ecological specialists to discuss in detail all potential hydrological impacts for both the domestic water receiving region and the downstream region. Economists, hydraulic engineers, and political scientists could also provide opinions on the feasibility of the Red Flag River and its many multidimensional cross-border impacts.

As China is not always active participant in existing river commissions, a China-led information-sharing mechanism could be set up so that data can be shared between all riparian nations. This could take the form of water sharing committees and/or agreements.

As of October 2021, China has not signed a water-sharing treaty with any of its neighbors, nor has it signed international water treaties that govern transboundary waters around the world. In 1997, China along with Turkey and Burundi – three upstream countries on major rivers – voted against the Law of the Nonnavigational uses of International Watercourses (UNWC) at the 1997 U.N. General Assembly. The majority of China’s 17 downstream riparian nations are not signatories either.

Setting up a data-sharing agreement or committee could enable all riparian nations to exchange information data on flooding, droughts, snowmelt, and rainfall. It could also offer policy suggestions, improve water management practices, and work with local riparian communities. In this way, information sharing between China and the downstream countries would temper water security concerns while the sharing of data could lead to better water conservation and ecological preservation within each of the riparian nations. Both consultations and data sharing mechanisms could enable the various sides to express their opinions and avoid conflicts, resulting in a much fuller understanding of the mega hydro-engineering water diversion proposal by citizens and the governments of China and the downstream nations. This would, in turn, also reduce fears over water (in)security and its consequences.