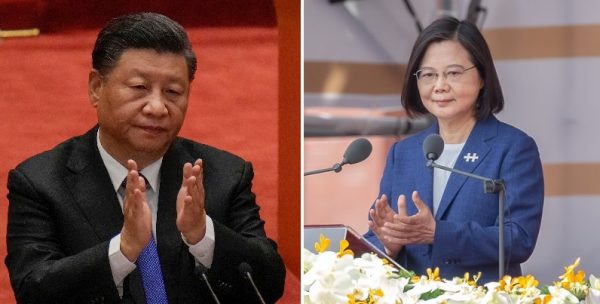 October 10 if this year marked the 110th anniversary of the 1911 Revolution (or Xinhai Revolution) as well as the founding of the Republic of China (ROC), which retreated to Taiwan after its defeat in the Chinese civil war in 1949. For both the ROC and the People’s Republic of China, “Double Tenth Day” is a significant platform for demonstrating the legitimacy of their respective regimes and signaling the next phase of policy toward one another. Particularly given the long-simmering tensions between Beijing and Taipei, the attitude of leaders’ public addresses might impact regional security and diplomatic behavior.

Since 2016, when Tsai Ing-wen of the Democratic Progressive Party (DPP) was inaugurated as president on Taiwan, Beijing’s Taiwan policy has tended to be increasingly uncompromising, resorting to both diplomatic pressure and military deterrence. During the first four days of October, as the People’s Republic of China (PRC) celebrated its National Day, the People’s Liberation Army (PLA) flew 149 sorties into Taiwan’s air defense identification zone, smashing the record for any month since Taiwan began releasing such data.

In this context, President Xi Jinping’s address “commemorating the 110th anniversary of Xinhai Revolution” was exceptionally restrained, and he refrained from showing a hawkish image. Xi hit the required notes of claiming the Chinese Communist Party as the sole legitimate successor of Sun Yat-sen’s nationalist revolution and calling for the achievement of national rejuvenation, but he notably turned back to seeking “peaceful reunification” with Taiwan. Compared with his previous statements about not giving up “the use of military force” to achieve unification, his statements this week were noticeably more moderate in tone.

What led Xi to change his attitude toward Taiwan? It is clear that Beijing’s aggressive Taiwan policy has been not only ineffective, but has triggered an international backlash. On the one hand, the tensions between the two sides have aggravated the antipathy of the Taiwanese people toward the Chinese government. In the latest survey conducted by the liberal Taiwanese Public Opinion Foundation, 76.8 percent of respondents identified themselves as “Taiwanese,” versus only 7.5 percent identifying as “Chinese.” Additionally, merely 11.1 percent of respondents supported “unification,” compared with 46.6 percent supporting “Taiwan independence” and 26.4 percent “maintaining the status quo.”

In global affairs, even though the Chinese government defines the Taiwan issue as a domestic affair and is alert to any form of foreign intervention on this question, it is an awkward reality that cross-strait tensions have been internationalized to some extent. As evidence, some European countries that formerly played a neutral role in Chinese affairs have started to break their silence on the question of Taiwan. In July, Lithuania became the first European Union member to set up a “Representative Office” using the name “Taiwan,” which led to a straining of ties between Beijing and Vilnius. Hence, it is feasible that Beijing wishes to relieve the diplomatic pressure by presenting a pacifist image.

Another factor comes from Washington, as the deterioration in China-U.S. relations since the Trump administration has finally eased. On October 6, U.S. National Security Advisor Jake Sullivan, met with top Chinese diplomat Yang Jiechi in Zurich, Switzerland. Unlike the unhappy experience in March, the two sides had “comprehensive, candid, and in-depth exchanges” on a wide range of issues of common concern. Their meeting, according to China’s Foreign Ministry, was “constructive, and conducive to enhancing mutual understanding.” As a result, the leaders of two states are expected to hold a virtual summit by the end of this year. Adding to the positive momentum, the U.S. Justice Department reached a deal with Meng Wanzhou, Huawei’s chief financial officer, concerning fraud charges against her; the latter has returned to China without pleading guilty.


Despite its unceasing high-tech competition, the United States made concessions to ease the bilateral tensions in return for China’s commitment to maintaining regional stability in East Asia. The Biden administration cannot stomach the risk of a military clash with the PLA or diplomatic failure in Taiwan. The precondition, however, is that Beijing should also refrain from provoking conflicts. In a sense, Beijing and Washington have reached a tacit agreement on the Taiwan issue.

On the other side of the Taiwan Strait, Tsai Ing-wen delivered her toughest “Double Tenth” speech yet. Internationally, Tsai emphasized the importance of mutual cooperation with democracies and other multilateral organizations, including “the  G7, NATO, EU, and QUAD,” in keeping “peace and security in the Taiwan Strait.”

Tsai also used some new phrases for describing the cross-strait relationship. First, she repeatedly emphasized the 72 years since the ROC government relocated from the mainland to Taiwan, mentioning the figure “72 years” more times than “110 years.” The impact was to de-emphasize the Xinhai Revolution in mainland China that gave birth to the ROC and instead highlight the history of the ROC on Taiwan specifically.

Second, Tsai proposed “four commitments” made by the people of Taiwan:

In a word, Tsai’s address sounded like an advanced edition of the “special state-to-state relationship” proposed by former President Lee Teng-hui. In the face of PLA’s constant military provocations, and the corresponding risk, Tsai delivered a hardline speech.

This speech aimed to achieve several goals. First, Tsai summarized her political achievements in a bid to cement a prominent historical position in the Taiwanese independence movement, like her predecessors Lee Teng-hui and Chen Shui-bian.

Second, by making a clear claim on cross-strait issues, Tsai aimed to expand the DPP’s political influence in Taiwanese politics. On September 25, Eric Chu, one of the bigwigs in the opposition Kuomintang (KMT), won the party chair election. He is determined to recapture the ruling power in the next general election in 2024. However, the KMT’s ambiguous position on cross-straits relations does not have widespread support among voters and is in danger of being marginalized in Taiwan’s politics. Therefore, Tsai’s address tries to maximize the DPP’s ballots by inciting anti-Chinese sentiment and exerting pressure on the KMT.

It should be clear that Tsai is gambling on the future of Taiwan’s politics and the ties between Beijing and Taipei. On the one hand, the DPP’s ultimate goal of promoting Taiwan’s independence cannot be achieved without revising the ROC constitution. Hence, all her words on “Double Tenth Day” were a rubber check. Furthermore, given Taiwan’s long-term role as a pawn in international affairs, Tsai should not entirely pin her hopes on the support from the United States or other actors. The U.S. attitude toward Taiwan depends on its correlations with national interests. With a warmer China-U.S. relationship in play, Taipei should reconsider its policy toward both great powers.