In a bid to further concentrate state control over public messaging, China released draft regulations on Friday that would ban “non-public capital” from funding “news gathering, editing and broadcasting.” The proposal is contained in the Market Access Negative List (2021), released by the National Development and Reform Commission (NDRC), the country’s main economic planning agency.

If adopted, the Negative List would deal a significant blow to Caixin, a print and online financial news service revered for investigative journalism, including into the death toll of COVID-19 in Wuhan last year.

Six days before the draft regulation’s release, Caixin publisher and founder Hu Shuli posted a cryptic message to Weibo interpreted by many as fighting words expressing contempt for Xi Jinping and the proposed media reform. 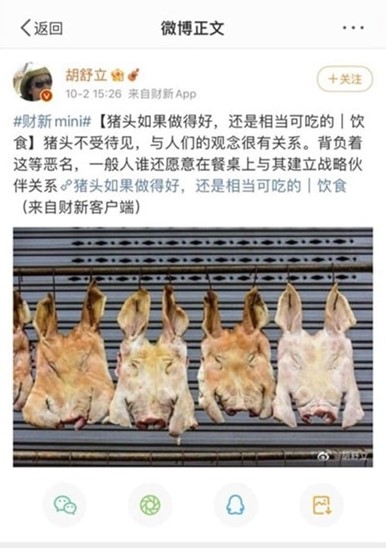 Hu’s post linked to a Caixin article on the culinary preparation of swine head. Alongside the article’s title and an image of pig heads in a butcher’s shop, Hu wrote: “The sight of a pig’s head is not welcomed … Given its bad reputation, nobody wants to sit at the table with it to establish a strategic partnership.”

Many believe Hu was alluding to the collapse of a “strategic partnership” between Xi and Vice President Wang Qishan, who in Xi’s first term headed his anti-corruption campaign. Such a partnership may also have benefited Hu and Caixin, with Wang’s support for Hu allowing her to operate freely as long as she did.


“Xi’s relationship with Wang is very subtle,” Cai said. “Xi knows that Wang is more capable than him. And in the logic of autocracy, one needs dominate all those who could pose a threat.”

A diminished role for Wang at the Bo’ao Forum in April, as well as an investigation in October last year into his former aide Dong Hong, have suggested a turn for the worse for Wang in his standing with relation to Xi.

“Caixin’s roots, and of Caijing before it, go back to the 1980s and the capital markets in Beijing, where Wang Qishan was a key player,” said author and independent journalist Yao Bo, who is based in Kyoto.

“Why has it been possible for Caixin to keep going for so many years? And for Hu Shuli to persist? It’s because of Wang Qishan,” according to Yao.

Luo, who worked with Hu as a managing editor at Caixin’s predecessor Caijing, wrote disdainfully of the Chinese army’s deployment in Korea without thermal clothing in the winter of 1950, leading to deaths by hypothermia.

“Half a century later, compatriots have failed to reflect on this war’s contested nature,” Luo wrote. “Just look at present-day North and South Korea and the answers are all there.”

Luo published his post to Weibo, where he had over half a million followers. The post was taken down and his account suspended by public security officials, and he was detained for “illegal speech insulting heroes and martyrs.”

“Why would Luo Changping blurt out like this?” asked Toronto-based independent journalist Wen Zhao. “The despair and rage is evident. The Negative List is clearly meant to eliminate this group of media personalities.”

It is not official yet but under “public consultation,” and stakeholders are invited to submit comments to the NDRC before a revised draft is approved and enacted. However, most regulations in China are passed with little modification following the “public consultation” period.

Li Guangman, an ultra-leftist blogger, praised the proposed media reforms. Gu Yonghua, director of the Marxist Journalism Research Center at Communication University of China in Beijing, gave the official context to the legislation in an interview with Chengdu’s Red Star News.

“News in China is guided by a Marxist perspective, uniting the party’s and the people’s spirits,” said Gu.

“It is the voice of the party and the people, carrying the important responsibility of reflecting and spreading public opinion. It is not like the media in other countries which operates in the service of special interests,” according to Gu.