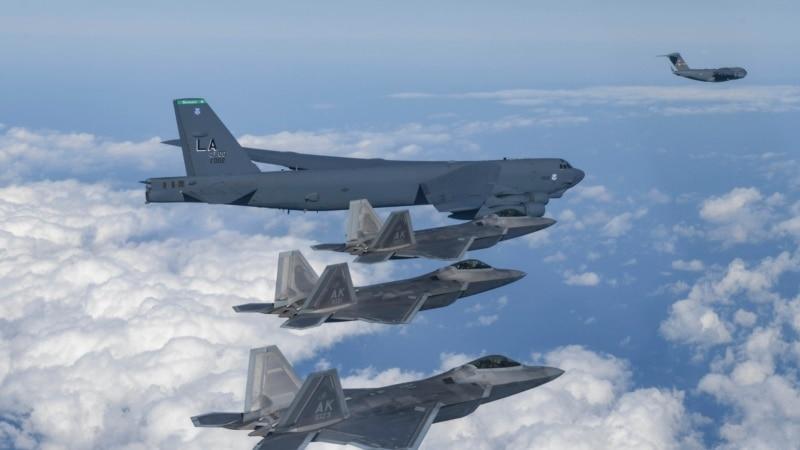 South Korean F-35A and F-15K fighters also participated in the joint air drills held in South Korea’s air defense identification zone southwest of its southern island of Jeju, according to a statement by Seoul’s Ministry of National Defense.

It is the allies’ latest show of force toward North Korea, which has hardened its rhetoric toward the United States and South Korea and conducted a record number of missile tests this year.

In its statement Tuesday, South Korea’s defense ministry mentioned that agreement, noting that the allies will “continue to strengthen the combined defense posture” of the South Korea-U.S. alliance in response to North Korea’s nuclear and missile threats.

Earlier this week, North Korea launched a pair of medium-range ballistic missiles, which it said were part of an “important final-stage test” that will soon result in the country’s first spy satellite.

In its report describing the test, North Korea’s state news agency published a pair of low-resolution, black-and-white images of the South Korean cities of Seoul and Incheon, presumably taken from the mock satellite launched during the test.

Defense analysts noted that the North Korean images were of much lesser quality than commercially available satellite images, such as those available on websites like Google Maps.

On Tuesday, senior North Korean leader Kim Yo Jong, the sister of the country’s supreme leader, Kim Jong Un, posted an editorial in state media blasting South Korean analysts who questioned the North’s claim to have made significant progress in the spy satellite program.

In her nearly 2,000-word rant, Kim slammed such defense experts as “chattering sparrows,” “military hooligans,” and “puppet experts” and suggested North Korea could have produced more sophisticated satellite imagery if it wanted.

She also hinted North Korea could soon conduct a long-range missile launch at a normal rather than lofted trajectory. In the past, North Korea has used a steep angle in such launches, in part to avoid sending weapons over the territory of its neighbors.

A normal trajectory launch would be much more provocative, since it could fly in the direction of U.S. territory. It could also show North Korea has made progress on important technical benchmarks, such as developing reentry vehicles that can successfully carry warheads through the atmosphere to far-away targets.

The United States and its allies for months have also warned that North Korea is in the final stages of preparing for what would be its seventh nuclear test since 2006.