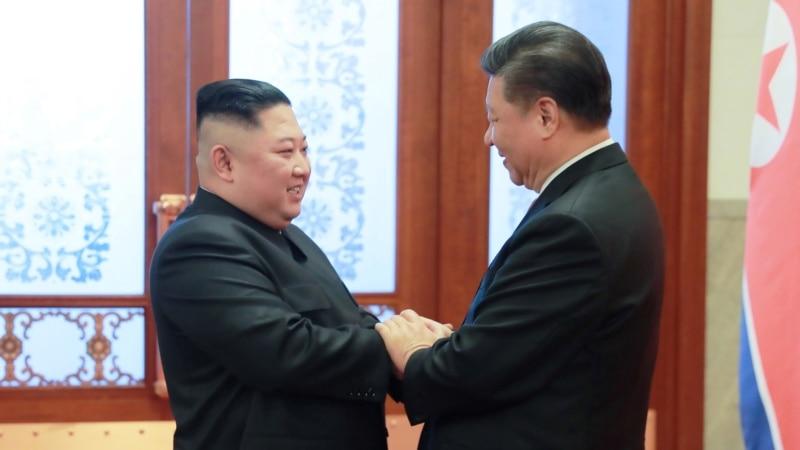 Given its frayed relationship with Washington, Beijing is unlikely to heed U.S. and South Korean calls to urge North Korea to cease missiles and nuclear weapons tests and ease tensions on the Korean Peninsula, said experts.

In response to North Korea’s record number of missile launches this year and what would be its seventh nuclear test that has been anticipated throughout this year, Washington and Seoul have been calling on China to use its leverage over North Korea to dissuade the regime from conducting any more tests. China is North Korea’s largest trading partner and longtime ally.

Kim “stressed the need for all U.N. member states to fulfill their obligations and fully enforce the sanctions regime” at the virtual meeting with Liu, said Price on December 8.

VOA’s Korean Service contacted the Chinese embassy in Washington seeking comments on a possible move by Beijing but did not obtain any response.

Kim and Liu’s discussion followed U.S. President Joe Biden’s efforts to persuade Chinese President Xi Jinping to convey a message to Pyongyang that it should stop testing intercontinental ballistic missiles (ICBMs) when the two met on the sidelines of the G-20 summit in Bali, Indonesia, on November 14.

At a press conference held after their meeting, Biden said that he made it clear to Xi that Beijing has “an obligation to attempt to make it clear to North Korea” that it “should not engage in long-range nuclear tests.”

When South Korean President Yoon Suk Yeol met with Xi on the sidelines of the Bali summit on November 15, he expressed hope that China will “play a more active and constructive role” on North Korea.

Yoon also said in an interview with Reuters on November 28 that “China has the capability to influence North Korea, and China has the responsibility to engage in the process.”

But experts think China is unlikely to use its leverage to ask North Korea to stop conducting tests.

Bonnie Glaser, director of Asia Program at German Marshall Fund of the U.S., said, “I highly doubt that Beijing will seek to dissuade Pyongyang from conducting ICBM and nuclear tests.”

She continued, “The Chinese appear to have concluded that sanctions have failed, and they prefer dialogue with the DPRK.” North Korea’s official name is the Democratic People’s Republic of Korea.

North Korea is heavily dependent on China, its top trading partner, for economic support. In recent years, as the rivalry between Washington and Beijing intensified, China and North Korea forged closer ties in opposition to the U.S.

China has blocked U.S-led efforts at the U.N. Security Council in May and November to impose sanctions on North Korea in response to multiple rounds of ICBM and other ballistic missile tests.

Patricia Kim, research fellow at the Brookings Institution, said, “Chinese leaders are choosing to tread carefully around their neighbor to keep Pyongyang on their side as they focus on long-term competition with the U.S.”

China sees the U.S. Indo-Pacific Strategy, which aims in part to maintain free and open maritime passage through the Taiwan Strait, as a bid to counter its influence and expansion in the region, especially to prevent it from seeking to exercise its claim to sovereignty over Taiwan.

She continued, “Beijing would likely derive greater benefit to its interests if it worked to distract or hinder U.S. and [South Korean] efforts to curb North Korea’s nuclear ambition. China may perceive that in doing so, it exercises a certain leverage over the U.S. in their ongoing strategic competition.”

Meanwhile, the U.S., South Korea and Japan have vowed to coordinate their efforts to counter Pyongyang’s missile and nuclear threats.

The move might make China “nervous” as it could be seen as an “anti-China grouping,” according to Andrew Yeo, the SK-Korea Foundation chair in Korea studies at Brookings Institution.

They reviewed synchronized trilateral sanctions that the three countries imposed on North Korea earlier in December and said they will use all tools to limit North Korea’s growing weapons programs.

In response to North Korea’s missile tests, the three countries have stepped up their joint military drills, including missile defense exercises in October.

Yeo said, “China may decide that what North Korea is doing is disruptive, that it’s actually giving incentives for South Korea, Japan and the U.S. to increase exercises, and so it may pressure North Korea.”

Robert Manning, a senior fellow at the Stimson Center, said, “Deepening U.S. and U.S-ROK-Japan cooperation is not what Beijing hoped for.”

Ahead of the Biden-Xi summit in November, China’s state-run Global Times warned against the closer trilateral ties, criticizing a joint statement the three countries issued after a November 13 meeting in Phnom Penh, Cambodia, emphasizing a desire to strengthen their ties.

Joseph DeTrani, special envoy for six-party denuclearization talks with North Korea during the George W. Bush administration, said he does not believe that Beijing has “the leverage” to get North Korea to stop conducting ballistic missile and nuclear tests.

But, he said, “China has the leverage with North Korea to get Pyongyang to return to talks with the U.S.”