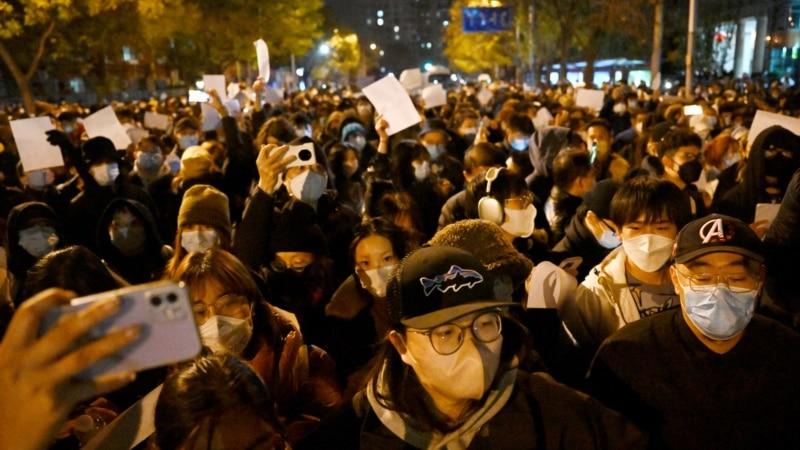 A number of young people joining protests against China’s zero-COVID policies have told reporters they felt it was their responsibility to demonstrate, recalling a sentiment expressed by some of the participants in the deadly 1989 Tiananmen Square protest.

Social media video of a November 27 protest by about 1,000 mainly young people in Beijing shows a reporter asking some in the crowd, “Why are you here?”

“It is my – it is our duty,” replies one young man in a baseball cap and burgundy hoodie, whose remark is echoed by another voice from the crowd. “I’m from China,” adds a young woman standing next to the man in the hoodie.

The exchange was shared thousands of times on Chinese social media, where the man and woman were quickly dubbed “Brother Duty” and “Sister Duty” of the year 2022.

Some posted this clip alongside a scene from 1989. In that year, thousands of young people occupied Beijing’s central Tiananmen Square for more than six weeks before being violently dispersed by troops backed with tanks. This particular clip featuring “Brother Duty of 1989” did not show the bloody crackdown, nor scenes of the Square which was fully occupied by protesters. Instead, it showed a young man riding a bicycle on the streets of Beijing, heading somewhere.

“Going to march, Tiananmen Square,” A young man in a red headband and eyeglasses says to a reporter.

“Why?” the reporter asks.

“What do you think?” he says, before giving his answer. “It’s my duty,” the young man says with a smile before cycling off with several other students.

The side-by-side portrayals provided a sense of affirmation for Wei Jingsheng, a dissident born in Beijing in 1950, who spoke to VOA by telephone from the suburbs of Washington, where he lives in exile.

“I have always believed that we ought to have faith in younger generations,” said Wei, who became a political prisoner in the 1970s and spent a total of 18 years behind bars. “Each generation of China’s youth is growing stronger and more capable than the previous one,” he added.

Wei said that, despite the best efforts of authorities to restrict access to unauthorized information, the internet has given today’s Chinese youth a wider view of the world than previous generations. “They’re more informed than we were, and not an ounce less courageous,” he said.

Orville Schell, a longtime China watcher and director of the Center on U.S.-China Relations at the Asia Society, recently penned an essay saying the recent protests in China have revived a “long tradition of Chinese dissent.”

He recalled movements dating back to 1919 and continuing through the late 1970s when Wei and others of his generation were active. Schell also cited dissent expressed by the astrophysicist Fang Lizhi in the mid-1980s and the Charter 08 movement of 2008, led by Liu Xiaobo who was jailed a year later for his role in the effort and later died in prison.

The videos of the November 27 protest and its Tiananmen counterpart have been scrubbed from Chinese social media but can still be seen thanks to organizations such as China Digital Times, a UC-Berkeley-based nonprofit group that preserves Chinese internet postings before they disappear because of government censorship.

“Around the time of the 30th anniversary of June 4th, I showed my husband this video clip,” says one comment on the Digital Times site, referring to the 1989 Tiananmen video.

“He said he couldn’t believe this was how things were 30 years ago and was jolted. After, he got into a craze of searching for videos on YouTube about June 4th, and kept watching them, including on his way to work, and on his way home,” she said.

That revelation led her husband to search for truths concerning other historical events, including the Great Leap Forward and the Great Famine, in which tens of millions of people died from starvation.

Wei said he believes those who stepped forward in the most recent protests were “aware of the risks to themselves and were still willing to give themselves to the cause of freedom in China,” much as he did himself in the 1970s.