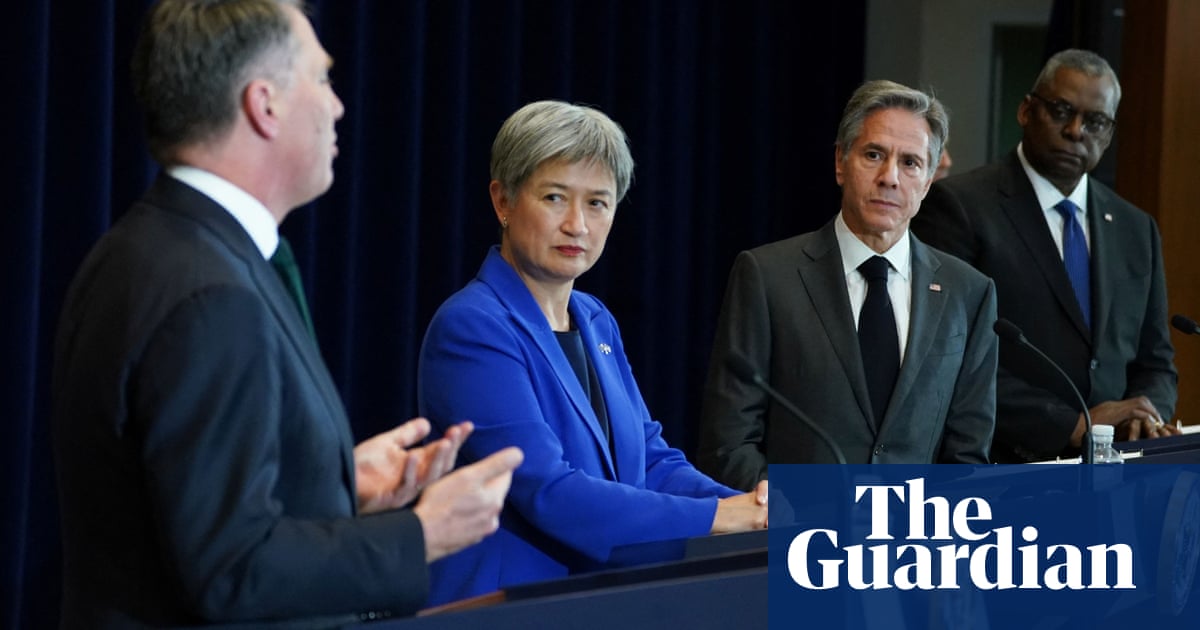 The US will increase rotations of its air, land and sea forces to Australia and has condemned China’s “dangerous and coercive actions” across the Indo-Pacific region.

As part of the step-up in defence ties, the US plans to preposition munitions and fuel in Australia to support its military forces. Airfields in northern Australia are set to be upgraded to enable rotations of US aircraft.

The defence secretary, Lloyd Austin, also said the US would not allow Australia to experience a capability gap in its naval forces and pledged to help the country acquire nuclear-powered submarines “as quickly as possible”.

Austin and the US secretary of state, Antony Blinken, welcomed their Australian counterparts Richard Marles and Penny Wong to the US state department on Wednesday for annual high-level talks between the two allies.

In the first such meeting since the change of government in Australia, the two sides agreed to “preposition stores, munitions, and fuel in support of US capabilities in Australia”.

Austin said the US would “increase rotations of our air, land and sea forces” to Australia as the two countries were “determined to be a force for stability” in the region.

“That includes rotations of bomber task forces, fighters and future rotations of US navy and US army capabilities,” Austin said, adding that the specific details would be worked out by officials and announced at a later date.

In a sign of growing trilateral cooperation with Tokyo, Austin said Japan would also be invited “to integrate into our force posture initiatives in Australia”.

Wednesday’s announcement is the latest step in the growth of the US presence in Australia, which already includes US Marines rotating through Darwin under a plan first put in place by the Gillard government and Obama administration.

A US-funded aircraft parking apron at RAAF Base Tindal, 320km south-east of Darwin, will be capable of accommodating up to six B-52 long-range, heavy bomber aircraft once constructed, officials confirmed earlier this year.

The annual talks between the two allies are known as the Australia-US Ministerial Consultations, or Ausmin.

In a statement issued afterwards, the allies vowed to offer countries in the region “support to resist subversion and coercion of any kind”.

The statement included numerous criticisms of China, including over human rights violations and over its “destabilising actions in the South China Sea, such as the militarisation of disputed features and dangerous encounters at sea and in the air”.

But Australia and the US also warned against allowing increasing geopolitical competition to “escalate into conflict”, and they said they would “engage Beijing on risk reduction and transparency measures”.

Australia plans to acquire at least eight nuclear-powered submarines under the Aukus partnership, which also includes the UK.

There are increasing expectations of a US design being adopted, but this has yet to be confirmed, and March is the deadline for key decisions.

Austin said the Aukus countries remained in talks to “design the optimal pathway for Australia to get a nuclear-powered, conventionally armed submarine as quickly as possible”.

“We recognise where Australia is and when its capability begins to diminish and of course we will address all of that in the pathway that we create,” Austin said.

The UK defence secretary, Ben Wallace, will join Marles and Austin for a first meeting of the Aukus defence ministers on Thursday.

Marles said the US decision to share its naval nuclear propulsion technology with Australia, decades after doing so with the UK, was “a huge step” that would transform Australia’s strategic posture and “increase our capability dramatically”.

Marles said the increased defence cooperation between the US and Australia was important “from the point of view of providing balance within our region”.

Wong said the US was Australia’s vital security ally and they shared a resolve “to enhance our relationship to meet the growing strategic challenges of our time”.

Despite broad continuity in the alliance, Wong said collaboration on climate change was an area of “enhanced emphasis” since the change of government in Australia.

The allies plan to share assessments and advice on the national and regional security risks posed by climate change. They will also pursue talks with China on issues of shared interest including climate change.

While the Australian government has been seeking to “stabilise” the rocky relationship with China, it has repeatedly said Australia’s policy positions remain unchanged.

On Tuesday China’s foreign ministry offered a relatively muted response to the visit to Taiwan by six Australian politicians, urging Australia to “stop all forms of official interaction with the Taiwan region” and not to embolden independence forces.

The Australian government does not maintain official ties with Taiwan but pursues cultural and economic ties on an unofficial basis.

Wong said on Wednesday Australia had “a strong stake in preserving peace and stability across the Taiwan Strait” and opposed any “unilateral change to the status quo”.