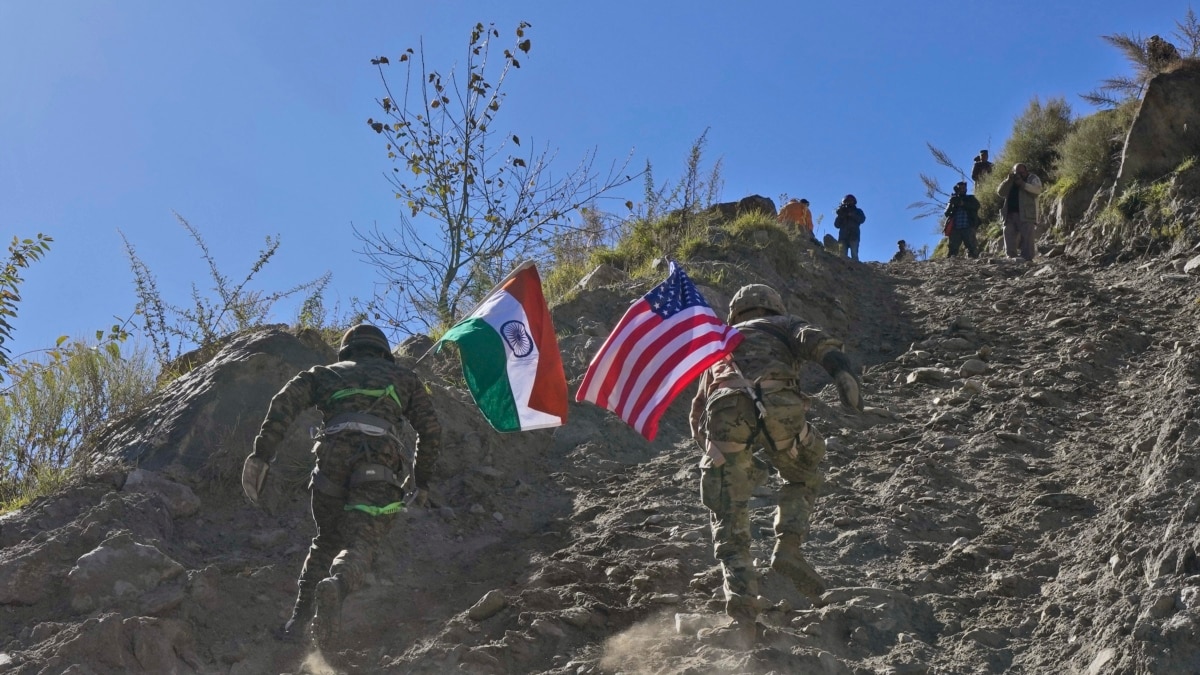 The drills between Indian and U.S. soldiers began in mid-November and are due to conclude Friday. Part of annual exercises held by the two sides, this year’s maneuvers are taking place in the Himalayan mountains in Auli in Uttarakhand state, about 100 kilometers from the border area, known as the Line of Actual Control.

China said on Wednesday that the joint exercises “violated the spirit of relevant agreements” between Beijing and New Delhi. “It does not serve the mutual trust between China and India. China has expressed concerns to the Indian side over the military exercise,” foreign ministry spokesman Zhao Lijian told a media briefing in Beijing.

Responding to China’s comments, Indian foreign ministry spokesman Arindam Bagchi said Thursday that “India exercises with whomsoever it chooses to, and it does not give a veto to third countries on this issue.”

Bagchi said the exercises had nothing to do with the agreements China had referred to. “But since these were raised, the Chinese side needs to reflect upon and think upon its own breach of these agreements,” according to Bagchi.

Tensions between India and China have escalated since a bloody border clash in 2020 killed 20 Indian and four Chinese soldiers in the Ladakh area. As a result, both sides continue to deploy tens of thousands of soldiers backed by artillery, tanks and fighter jets along the disputed border and are rapidly building infrastructure in the Himalayan mountains.

Following several rounds of talks between the military commanders of the two countries, soldiers have pulled back from some so-called “friction points” along the border where they were posted close to each other, but heavy deployments continue at other points that are of strategic significance to both sides.

The U.S. Department of Defense said in a report this week that China “warned” U.S. officials not to interfere in its relations with India following the border skirmishes. “The PRC (People’s Republic of China) seeks to prevent border tensions from causing India to partner more closely with the United States,” stated the report on “Military and Security Developments involving China” that was submitted to U.S. lawmakers.

This year’s drills in Auli were the 18th edition of joint exercises known as “Yudh Abhyas” or “War Practice” that are held alternately in the U.S. and India with the aim of exchanging best practices, tactics and techniques. Last year’s exercises were held in Alaska.

Before the drills commenced, India’s Ministry of Defense said the exercises will focus on surveillance, mountain-warfare skills, casualty evacuation and combat medical aid in adverse terrain and climatic conditions.

The exercises are part of deepening military cooperation between New Delhi and Washington, driven by mutual concerns over Beijing’s growing assertiveness. India is part of the Quad alliance, with the U.S, Australia and Japan, that aims to counter Beijing’s growing influence in the Indo-Pacific.

India’s foreign minister, Subrahmanyan Jaishankar, has reiterated on several forums that New Delhi’s relationship with Beijing cannot be normal without peace in the border areas.