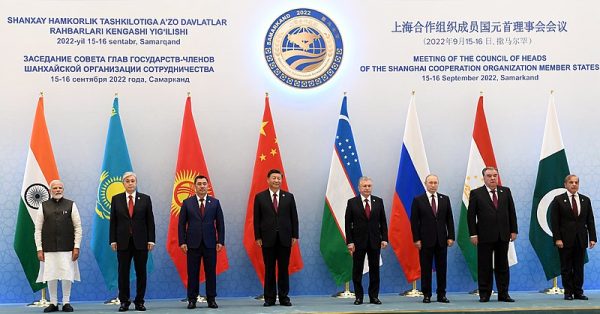 In September, Chinese President Xi Jinping chose Central Asia as the destination for his first trip abroad since January 2020. Soon after Xi’s Central Asia tour, where he visited Kazakhstan and attended at the Shanghai Cooperation Organization (SCO) summit in Uzbekistan, Chinese Vice President Wang Qishan rushed to Kazakhstan to attend the sixth summit of the Conference on Interaction and Confidence-Building Measures in Asia (CICA). The back-to-back high-ranking visits by Chinese top leaders to Central Asian states underscore the rapid rise in China’s emphasis on national security on its western periphery especially in the new context of the intensified Russia-Ukraine conflict.

As early as the foundation of the SCO in 2001, some Chinese scholars argued that China should have two parallel “Look East” and “Look West” strategies, meaning that Beijing would maintain peace and stability at the East Sea and South China Sea while consolidating its western periphery. To the west, border disputes with India and terrorism in Xinjiang and the neighboring Central Asia composed the two major security challenges to China. Since the founding of the SCO, China’s influence in Central Asia and its relations with Central Asian neighbors have expanded immensely. Meanwhile, terrorist threats from Central Asia have been severely undermined and economic cooperation between China and the Central Asian countries has also been greatly promoted.

Now, against the new background of intensified China-U.S. strategic competition and the escalated Russia-Ukraine conflict, the geostrategic importance of Central Asia has been further enhanced. Some analysts believe that Russia’s traditional influence in Central Asia is bound to be weakened amid attrition in the Russia-Ukraine war. At the same time, the United States has taken the opportunity to speed up the pace of cooperation with the Central Asian states. This forces China to upgrade its relationship with the Central Asian states through bilateral and multilateral channels. On one hand, top Chinese leaders toured Kazakhstan and Uzbekistan to strengthen cooperation with the major partners in Central Asia; on the other hand, China supported the expansion of SCO so as to guide the development of this key regional cooperation mechanism. In this way, China can not only reduce the strategic squeeze brought by the United States but avoid the risk of being “wrapped up” by the United States on both its east coast and western frontier.

China has increased its presence in Central Asia through two main actions: improving the physical connectivity between China and its Central Asian neighbors and supporting the construction of an effective multilateral security mechanism in the region.


Even before Xi officially proposed the Silk Road Economic Belt in 2013, there were many calls for the restoration of the ancient overland Silk Road, in which Central Asia was a significant junction between China and Europe. For the same reason, Xi emphasized the China-Kyrgyzstan-Uzbekistan railway during his Central Asia tour last month. With two other cross-border railways in the works – linking China to Pakistan and Nepal – it’s apparent that China is trying connect its western frontier with the neighboring countries in Central Asia and South Asia. The main aim is to restore the glory of the Silk Road and bring prosperity to the region.

With the launch of such connectivity projects, however, some security issues have emerged. China has placed its response to security threats at the heart of the SCO on one hand; on the other hand, it supported CICA. Wang’s attendance at the sixth summit of CICA is the last action taken by China to accelerate multilateral security cooperation in the region.

In 1992, Kazakhstan’s then President Nursultan Nazarbayev advocated for the establishment of the CICA conference. So far, CICA has 27 member states, eight observer states, and five international organizations with observer status. The organization’s secretariat is located in the capital of Kazakhstan, and its membership largely includes countries in West, Central, and South Asia.

This year, Kazakhstan that holds the rotating presidency. It seized the important chance of China’s expansion in Central Asia and strengthened the multilateral security cooperation with China within CICA, so as to further enhance the influence of conference as well as the capability of Central Asian states to safeguard their national security. China, of course, is very glad to see CICA play a larger role in consolidating defense cooperation within the member states and maintaining peace and stability in the region. Xi advanced this vision back in 2014, when China hosted the fourth CICA summit.

For a long time, the United States has courted Central Asian states through economic and defense cooperation as well as political engagement, in part intending to contain China and Russia’s influence in the region. Central Asian states don’t want to be forced into any country’s “zero-sum game” in which they must choose between partners. Central Asian countries in the geopolitical vortex increasingly attach importance to promoting multilateral security mechanisms based on mutual trust.

To conclude, China’s pace of “Looking West” will be significantly accelerated through deepening physical connectivity and supporting CICA in the region. In the near future, China will seek to play a bigger role in Central Asia.