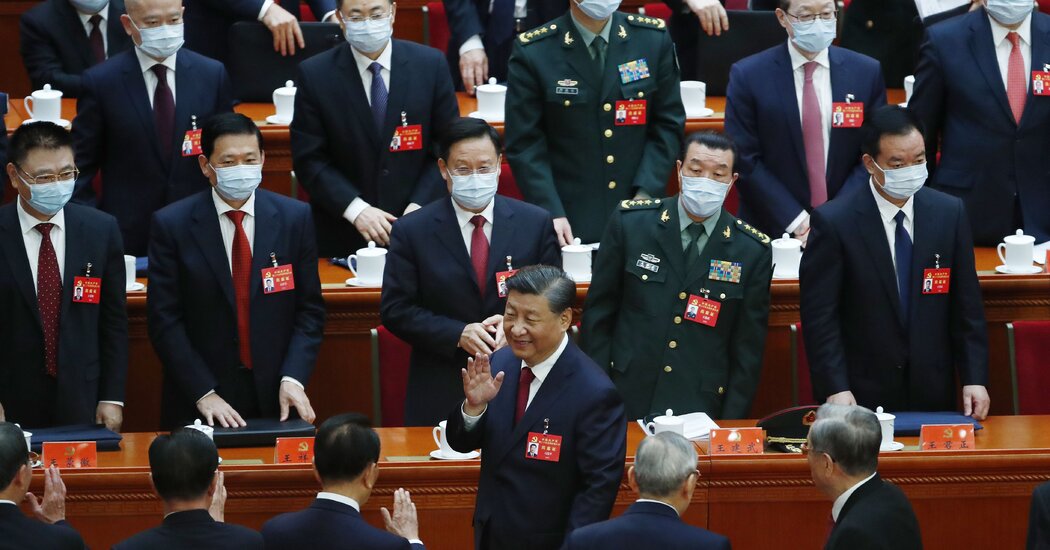 Xi Jinping defended his hard-line reign on Sunday, presenting himself to a congress of China’s ruling elite as the leader whose tough policies had saved the nation from the ravages of the pandemic and was now focused on securing China’s rise amid multiplying global threats.

Mr. Xi, who is poised to claim a groundbreaking third term as leader at the end of the weeklong Communist Party congress, used his opening report to argue that his decade in power had brought historic gains. He pointed to the party’s campaign against corrupt officials, its cleanup of the environment and its crackdown on antigovernment protesters in Hong Kong as key victories. He described Chinese foreign policy as a series of successes in fending off Western “bullying” and protectionism, apparently referring to disputes over human rights, technology and Beijing’s claim on Taiwan.

But his praise was coupled with a somber warning that the nation must stand united behind the party to cope with a world he depicted as increasingly turbulent — and hostile. And though he did not mention the United States by name, his distrust of the world’s other great power was an unmistakable backdrop to that exhortation.

“Be mindful of dangers in the midst of peace,” Mr. Xi said. “Get the house in good repair before rain comes, and prepare to undergo the major tests of high winds and waves, and even perilous, stormy seas.”

Speaking to a hall filled with delegates in face masks, he made no concessions to critics who have argued that his relentless “zero Covid” policies of lockdowns, mass testing and intrusive surveillance have pushed China into a cul-de-sac of unsustainable restrictions and economic damage. He argued instead that such tough policies, and the party’s dominance in nearly all aspects of everyday life, was what was needed to protect China’s 1.4 billion people.

He outlined a vision of the Communist Party leading China toward superpower status, saying that sweeping mobilization by the state was needed to ward off international threats circling around China. He told the congress that he would push for faster homegrown technological innovation, and would upgrade China’s already formidable domestic security apparatus.

He called for China to exert further influence on world affairs directly and through institutions like the United Nations, while at the same time cautioning that the coming years would pose new challenges for his country.

Mr. Xi gave his keynote report less than a week after President Biden issued a long-awaited national security strategy, which identified China as a threat to American security and global primacy. But as is usual for party leaders’ big speeches to congress, Mr. Xi did not mention the United States, nor did he say anything about Russia’s floundering invasion of Ukraine. Still, Chinese officials were expected to draw from Mr. Xi’s speech a warning to stand up to Washington over issues like recent American restrictions on the export of semiconductor technology to China and American support for Taiwan.

“His stance this morning showed that U.S.-China confrontation will continue,” said Willy Lam, a longtime analyst of Chinese politics in Hong Kong who is a senior fellow at the Jamestown Foundation. “Every time Xi Jinping speaks, he emphasizes the increasingly complicated and harsh international climate, and the implication is clear.”

In a sign of Mr. Xi’s singular focus on stifling perceived threats to China and party rule, Mr. Xi’s full report mentioned “national security” 26 times, more even than the 18 times in his longer report to the 2017 congress. In a congress report given by Mr. Xi’s predecessor, Hu Jintao, a decade ago, “national security” got four mentions.

The message behind Mr. Xi’s rhetoric was that China must “continue to circle the wagons — that a strong party leadership is necessary to fend off these increasing external threats,” said William Klein, a former U.S. diplomat with long experience with China who now works for FGS Global. “There’s a broad, stable, near-consensus majority in China now that truly believes the United States has the intention to disrupt China’s modernization drive.”

Since coming to power in 2012, Mr. Xi has built a powerful security apparatus that employs extensive networks of cameras and other surveillance equipment, backed by artificial intelligence, to monitor dissent online and on the streets. Threats, in Mr. Xi’s view, exist everywhere — not just enemies at the border, but in subversive ideas in classrooms and museums.

“The systems for safeguarding national security were inadequate,” Mr. Xi said in describing the situation when he took power. “National security is the foundation of national rejuvenation.”

Mr. Xi also repeated China’s longstanding demand that Taiwan, the self-governed island democracy of 24 million people, accept unification under Beijing. He reiterated that China wanted to gain Taiwan peacefully, but would never rule out force, which he said could be needed against external intervention — a clear reference to the United States and its allies. Tensions over Taiwan rose significantly in August when Nancy Pelosi, the speaker of the House of Representatives, visited the island and China launched intimidating military exercises.

“‘America’ was not mentioned from the beginning to the end, but almost everything points to America,” said Wang Hsin-hsien, a professor who specializes in Chinese politics at the National Chengchi University in Taipei, said of Mr. Xi’s comments.

The policy implications of Mr. Xi’s report will take time to become clearer, as his broad rhetoric is converted into policy proposals and legislation. But some of the most immediate consequences may be in China’s tech sector, which Mr. Xi said must step up efforts to master key technologies crucial for economic and military competition. Mr. Xi’s comments suggested that the state, not private industry, would guide key initiatives.

“He is doubling down on state-led innovation and trying to throw a bone to the country’s innovative tech elite to assure them that they still matter, but the new incentives are not clear,” said Paul Triolo, a China and tech policy expert at Albright Stonebridge Group.

When Mr. Xi turned his attention to China’s domestic economy, struggling with a painful slowdown and job losses this year, his proposals were more cautiously and vaguely worded, suggesting some desire to avoid alarming domestic and foreign investors.

He committed himself once more to his theme of “common prosperity,” a longtime Communist Party slogan that Mr. Xi has adopted as his response to China’s huge gulf between rich and poor. But Mr. Xi continued to avoid defining what the policy might entail.

He steered clear of any mention of introducing an inheritance tax, a tax on investment gains or a national tax on real estate — three measures long suggested by economists as ways to rebalance wealth and the overall economy. Mr. Xi spoke instead of the need to help people find jobs, and of the intrinsic value of hard work.

“It gives priority to employment — that is, not a welfare state,” said Bert Hofman, a former China director of the World Bank who is now the director of the East Asian Institute at the National University of Singapore.

Mr. Xi also gave a very brief mention to “dual circulation,” his stance that China should rely primarily on its domestic economy for growth while also maintaining a separate engine of international trade. Foreign governments and multinational corporations have worried that the concept could be a formula for reserving the domestic market for Chinese companies.

Even as Mr. Xi was doubling down on policies that critics have said are hurting China’s global and economic stature, the effects of those policies were playing out in real time.

As Mr. Xi described the country’s zero-Covid policy as a successful “all-out people’s war,” making clear that the government had no plans to shift from it soon, tens of millions of people across China were under some form of movement restriction.

Many districts of Shanghai, which emerged from a bruising citywide lockdown only in June, have shuttered entertainment venues as cases resurge there. In Beijing, where cases are also spreading despite the government’s determination to insulate the capital, the authorities have ramped up checks on mandatory regular coronavirus tests. Traffic was thin on Sunday morning in the city center, and normally bustling malls quiet.

The authorities’ strict controls on the internet, which Mr. Xi hailed on Sunday as successfully bringing about “fundamental transformation in the ideological sphere,” have dissuaded many Chinese from speaking about politics, online or offline. Despite ample propaganda about the party congress in the capital, residents seemed determined to avoid weighing in on the proceedings.

“In China, politics is like a closely guarded secret. People don’t talk about it much, and also are unwilling to get swept up in it,” said Bruce Zheng, a Beijing resident who works in public relations.

The contrast between the official heralding of the congress and the public’s relative silence was also apparent online. The official Weibo accounts of the Yunnan police and Shanghai fire departments shared photographs of their employees studiously watching a broadcast of the opening ceremony. But room for regular users to share their thoughts was strictly limited. On Baidu Tieba, a popular discussion forum, a search for Mr. Xi’s name produced an error message.