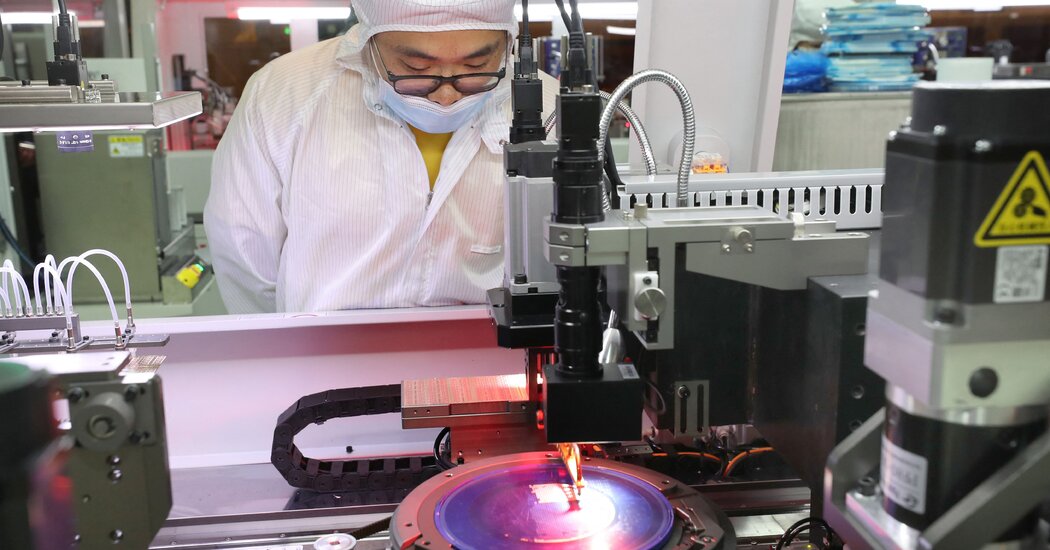 WASHINGTON — The Biden administration on Friday announced sweeping new limits on the sale of semiconductor technology to China, a step aimed at crippling Beijing’s ability to access critical technologies that are needed for everything from supercomputing to guiding weapons.

The moves are the clearest sign yet that a dangerous standoff between the world’s two major superpowers is increasingly playing out in the technological sphere, with the U.S. trying to establish a stranglehold on advanced computing and semiconductor technology that are essential to China’s military and economic ambitions.

The package of restrictions, which was released by the Commerce Department, is designed in large part to slow the progress of Chinese military programs, which use supercomputing to model nuclear blasts, guide hypersonic weapons and establish advanced networks for surveilling dissidents and minorities, among other activities.

Alan Estevez, the under secretary of commerce for industry and security, said that his bureau was working to prevent sensitive technologies with military applications from being acquired by China’s military, intelligence and security services.

“The threat environment is always changing, and we are updating our policies today to make sure we’re addressing the challenges posed by the PRC while we continue our outreach and coordination with allies and partners,” he said, referring to the People’s Republic of China.

Technology experts said the rules appear to impose the broadest export controls issued in a decade, similar to the Trump administration’s crackdown on telecom giant Huawei, but wider in scope, since they affect dozens of Chinese firms. In contrast to the Trump administration’s approach — which was viewed as aggressive but scattershot — the rules appear to establish a more comprehensive policy that will stop technology exports to a range of Chinese technology companies and cut off China’s nascent ability to produce advanced chips itself.

“It is an aggressive approach by the U.S. government to start to really impair the capability of China to indigenously develop certain of these critical technologies,” said Emily Kilcrease, a senior fellow at Center for a New American Security, a think tank.

Companies will no longer be allowed to supply advanced computing chips, chip-making equipment and other products to China unless they receive a special license. Most of those licenses will be denied, though certain shipments to facilities operated by U.S. companies or allied countries will be evaluated on a case-by-case basis, a senior administration official said in a briefing Thursday.

The restrictions limit U.S. exports of the cutting-edge chips called graphic processing units that are used to power artificial intelligence applications, and place broad limits on chips destined for supercomputers in China. The rules also ban U.S.-based companies that make the equipment used to manufacture advanced logic and memory chips from selling that machinery to China without a license.

Perhaps most significantly, the Biden administration also imposed broad international restrictions that will prohibit companies anywhere in the world from selling chips used in artificial intelligence and supercomputing in China, if they are made with U.S. technology, software or machinery. The restrictions used what is know as the foreign direct product rule, which was last utilized by former President Donald J. Trump to cripple Huawei.

Another foreign direct product rule bans a broader range of products made outside the United States with American technology from being sent to 28 Chinese companies that have been placed on an “entity list” over national security concerns.

The rules also restrict U.S. citizens from helping to develop the Chinese semiconductor industry to advanced levels. Earlier on Friday, the administration announced that it was adding another 31 Chinese companies and institutions to an “unverified list” that limits their ability to obtain a smaller set of certain regulated U.S. items. Among them is Yangtze Memory Technologies Co., Ltd, a major memory chip maker from which Apple has considered sourcing some products.

It remains to be seen whether the Chinese government will take action in response. Samm Sacks, a senior fellow at Yale Law School who studies technology policy in China, said the new rules could push Beijing to impose restrictions on American companies or firms from other countries that comply with U.S. rules but still want to maintain operations in China.

“The question is: Would this new package cross a red line to trigger a response that we haven’t seen before?” she said. “A lot of people are anticipating it will. I think we’ll have to wait and see.”

The measures come at a particularly sensitive moment for Beijing. Chinese leaders will hold a major political meeting beginning Oct. 16, where leader Xi Jinping is expected to secure a third leadership term, becoming the country’s longest-ruling leader since Mao Zedong.

Liu Pengyu, a spokesman for the Chinese embassy in Washington, said that the United States was trying “to use its technological prowess as an advantage to hobble and suppress the development of emerging markets and developing countries.”

How Times reporters cover politics. We rely on our journalists to be independent observers. So while Times staff members may vote, they are not allowed to endorse or campaign for candidates or political causes. This includes participating in marches or rallies in support of a movement or giving money to, or raising money for, any political candidate or election cause.

“The U.S. probably hopes that China and the rest of the developing world will forever stay at the lower end of the industrial chain,” he added.

The Chinese government has invested heavily in building up its semiconductor industry, but it still lags behind the United States, Taiwan and South Korea in its ability to produce the most advanced chips. In other fields, like artificial intelligence, China is no longer significantly behind the United States, but those technologies mostly rely on advanced chips that are designed or fabricated by non-Chinese firms.

Jack Dongarra, a computer scientist at the University of Tennessee, said that some of China’s most advanced supercomputers depend on chips made by California-based Intel or Taiwan Semiconductor Manufacturing Company, which uses U.S. technology in its production process and so would be subject to the new rules.

In a briefing with reporters, senior administration officials said the measures would be limited to the most advanced chips, and thus would not have a broad commercial impact on private Chinese businesses. But they conceded that they could become more restrictive over time, given that technology will begin to outpace them.

Industry executives say that many Chinese industries that rely on artificial intelligence and advanced algorithms power those capabilities with American graphic processing units, which will now be restricted. Those include companies working with technologies like autonomous driving and gene sequencing, as well as the artificial intelligence company SenseTime and ByteDance, the Chinese internet company that owns TikTok.

The actual impact of the restrictions will hinge on how the policy is implemented. For most of the measures, the Commerce Department has the discretion to grant companies special licenses to continue selling the restricted products to China, though it said that most would be denied.

Some Republican lawmakers and China hawks have criticized the department for being too willing to issue such licenses, allowing U.S. companies to continue selling sensitive technology to China even when national security may be at stake.

“If you want to stop it, you can just stop it,” said Derek Scissors, a senior fellow at the American Enterprise Institute. “When you create a licensing requirement, you are announcing to the world we don’t want to stop it. We are just pretending.”

The waivers to continue selling products to China could come under more scrutiny if Republicans regain the majority in the House after midterm elections.

Representative Michael McCaul, Republican of Texas, said he intended to use his authority as current ranking member of the House Foreign Affairs Committee to press the Bureau of Industry and Security, which reviews such licenses, on the applications and decisions.

“If Congress finds that B.I.S. is undercutting the spirit of these rules with lax licensing standards, then we’ll assess if the Department of Commerce is the right home for this national security agency,” Mr. McCaul said.

With its vast ecosystem of factories, China continues to be a massive and lucrative market for U.S. chip exports. The tiny technologies are crucial to the smartphones, laptops, coffee makers, cars and other goods that Chinese factories pump out for domestic consumption and export to the world.

Many American companies have long argued that their sales to China are an important source of revenue that allows them to reinvest in research and development and retain a competitive edge.

But doing business with China has become much more fraught in the last few years, as the tensions between the United States and China have morphed into a Cold War competition. The Chinese government has sought to blur the line between its defense sector and private industry, drawing on Chinese firms that specialize in fields including artificial intelligence, big data, aerospace technologies and quantum computing to fuel the country’s military modernization.

Chinese military drills aimed at intimidating Taiwan, and China’s alignment with Moscow following the Russian invasion of Ukraine have helped to extinguish any good will for China in Washington, and strengthened the case for technology regulation.

Still, industry executives and some analysts argue that cutting China off from foreign chips will accelerate Beijing’s push to develop them itself and cause U.S. companies to lose out to foreign competitors, unless other countries also impose similar restrictions.

The Semiconductor Industry Association said Friday that it was assessing the impact of the export controls on the industry and working with companies to ensure compliance.

“We understand the goal of ensuring national security and urge the U.S. government to implement the rules in a targeted way — and in collaboration with international partners — to help level the playing field and mitigate unintended harm to U.S. innovation,” it said in a statement.

In remarks last month, the Biden administration signaled that it would get tougher on technology regulation. Jake Sullivan, the national security adviser, said that the U.S. government’s previous approach, of trying to stay a few generations ahead of competitors, was no longer sufficient.

“Given the foundational nature of certain technologies, such as advanced logic and memory chips, we must maintain as large of a lead as possible,” he said.

Kevin Wolf, a partner at Akin Gump who led export control efforts during the Obama administration, said the move was “a fundamental shift in the use of export controls” to address broader national security objectives. Since the Cold War, most countries had used export controls more narrowly, focusing on regulating specific items that were necessary to produce or deploy weapons.

Mr. Wolf said the new measures would likely be highly effective in the short and medium term. “How effective they will be over the long term will be a function of whether allies ultimately agree to impose similar controls,” he added.