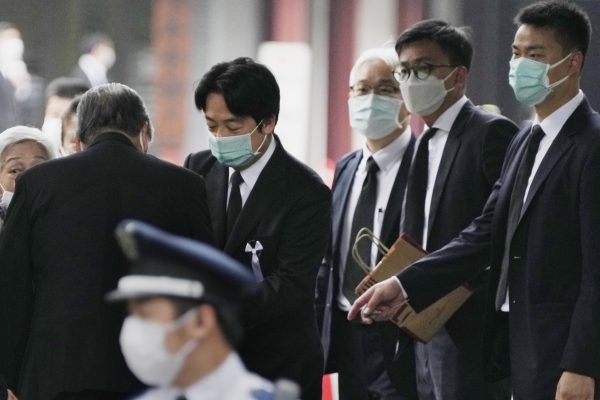 China has filed a formal protest with Japan over the presence of the Taiwanese vice president at a memorial for assassinated former Japanese Prime Minister Shinzo Abe.

China claims Taiwan as a breakaway province to be reunited by force if necessary and objects to any expression of its independent political identity.

Foreign Ministry spokesperson Wang Wenbin on Tuesday said Taiwanese authorities had “latched onto the opportunity for political manipulation,” and that Beijing has “made stern complaints with Japan in Beijing and Tokyo and made clear its position.”

“Its political scheme can never succeed,” Wang said at a daily briefing.

Lai is the most senior Taiwanese official to visit Japan since Tokyo severed formal diplomatic relations with Taipei in 1972 in deference to Beijing. The trip was reportedly made in his personal capacity, rather than being an official government visit.

Abe was known as a staunch supporter of Taiwan, a Japanese colony for 50 years where public sentiment strongly favors Tokyo. A spokesperson for Taiwan’s presidential office said in a statement issued shortly after the assassination that Abe “was an important world leader and a staunch friend to Taiwan.”

“[U]pon learning of former Prime Minister Abe’s passing, President Tsai Ing-wen expressed with great sadness and regret her deepest sympathy on behalf of the people and government of Taiwan,” the statement said. “The president also expressed that not only has the world lost a true leader, Taiwan has also lost a true friend.”

Taipei 101, the tallest building in Taipei, lit up with condolence messages on the evening of July 8.

China and Taiwan split amid civil war in 1949 and Beijing has increasingly sought to isolate the island’s government diplomatically. In deference to China, Taiwan, with its 23 million people and high-tech economy, has been shunned by the United Nations and can only participate in global sporting events as “Chinese Taipei.”

China now regularly sends warplanes across the Taiwan Strait and into Taiwan’s air defense identification zone to advertise its threat to use force if the island makes a formal declaration of independence, and to warn away its supporters, chiefly the U.S., along with allies including Japan.

In 2021, after resigning as prime minister, Abe angered Beijing with a speech in which he issued strong support for Taiwan and said that “military adventure would lead to economic suicide.”