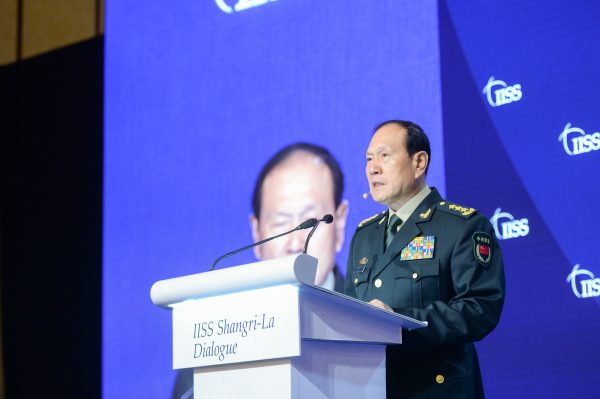 It was in 2007 that the Shangri-La Dialogue came into its own, with China and the growing importance of the Indo-Pacific at the center of its discussion. While China didn’t send ministerial-level officials, Vice Minister and Lt. Gen. Zhang Qinsheng’s presence at the 2007 Dialogue suggested that Beijing viewed the forum as an opportunity to advance its public diplomacy and demonstrate China’s ability to be more transparent and inclusive about its operations in the South China Sea and beyond. Zhang’s speech, in which he declared that China’s “peaceful development is not a makeshift, but a serious choice and pledge of the Chinese government and people,” hinted at the same. China, seemingly, had become an active part of a Western multilateral defense forum, and by the tone of Zhang’s speech, was willing to engage constructively with it.  However, the question today is how much this remains the case, especially when China is confronted with a mountain of criticism.

A few days ago, during this year’s Shangri-La Dialogue, officials from Japan and the United States set a confrontational tone in keynote addresses. Japanese Prime Minister Kishida Fumio delivered a speech that, without mentioning China by name, called into question China’s “unilateral attempts to change the status quo by force” in the East China Sea. He also targeted its designs on Taiwan, noting that Chinese activities in the Taiwan Strait were contrary to the respect of “people’s diversity, free will, and human rights.” The same was true for the U.S. Secretary of Defense Lloyd Austin, who reiterated Washington’s policy of strategic ambiguity and commitment under the Taiwan Relations Act, but confronted Beijing over its aggressiveness in the Taiwan Strait.

China reacted intensely to both Kishida and Austin’s speeches. A senior Chinese official called Austin’s speech “confrontational” and Chinese Defense Minister Gen. Wei Fenghe reportedly told Austin that China would “smash to smithereens any Taiwan independence plot and resolutely uphold the unification of the motherland.” Kishida’s statement that “Ukraine today may be East Asia tomorrow” was even less reassuring. Looking only at the last week’s Dialogue and not at the gamut of regional fora, China’s tone was defensive if not aggressive, but it does not mean that China hasn’t been willing to engage.

In addition to participation in the Singapore-based Shangri-La Dialogue, China is often a key participant in other regional fora, such as the Shanghai Cooperation Organization, the Asia-Pacific Economic Cooperation (APEC) mechanism, the ADMM Plus, and the ASEAN Regional Forum. China has long complained – not just at this event – that Western participants in the Dialogue were taking the opportunity to “bully” or “gang up” on it, even if this year’s comments were particularly strident. Back in 2018, regional rival India even lent China a supportive shoulder, when Indian Prime Minister Narendra Modi was set to give the keynote, saying India “does not see the Indo-Pacific Region as a strategy or as a club of limited members”.


In the past, China was as cooperative as much as it was combative. While in 2007 Zhang was quick to criticize a Pentagon report that called into question the size of China’s military budget as well as its intentions in the Taiwan Strait and other regional hotspots, he also agreed to a proposed U.S.-China military “hotline” in an effort to improve relations with Washington. Biden early last year advanced the notion of more hotlines to improve communication between the two powers. Later, China agreed to send higher level officials to the Shangri-La Dialogue, with Gen. Liang Guanglie in 2011 becoming the first Chinese defense minister to address delegates. China has reached the conclusion that attendance is better than remaining aloof, as it can directly confront criticisms thrown its way, as well as criticize aspects of the international order that it deems unfair or unnecessarily hostile. Beijing’s reactions to the Kishida and Austin addresses are in keeping with that strategy.

China can also turn on the charm. The International Institute for Strategic Studies (IISS), which hosts the Dialogues, invited People’s Liberation Army (PLA) Maj.-Gen. Yao Yunzhu, from China’s Academy of Military Sciences, to attend. Critics found her six appearances at the Shangri-La Dialogue, most recently in 2018, as being well above average, particularly when she offered candid advice for her own country on how to handle Western criticism. Yao noted that with regard to its engagement on the international stage, China must “break through the discourse barrier.” Her performance set the mark and set the stage for Gen. Wei.

While the Track One (official or governmental) element of the Shangri-La Dialogue dominated news headlines, the IISS forum also provided a Track Two (backchannel or informal) component that offers an environment for experts, academics, the private sector, and others to engage with senior officials or each other. It also invited questions and answers between governmental officials that transcend mere public diplomacy, creating a semi-Socratic environment where criticisms have the opportunity to be processed and remedies proposed.

For example, when confronted with a question on Sunday from Zhao Xiaozhuo, a senior fellow at the Academy of Military Sciences and a representative of China’s People’s Liberation Army, Singapore’s Defense Minister Ng Eng Hen replied that China had to decide if the Dialogue “adds value.” Further, he said, “Is it better? To come to an open platform, to subject yourself sometimes to a tyranny of questions and to what might seem a common view from others to explain yourself? Or to retreat from that engagement? That is something that China must decide for itself.”

China’s presence and engagement in Singapore, while mostly hidden by posturing and confrontational rhetoric, is welcome and should be encouraged. The Shangri-La Dialogue is a unique and independent regional defense forum, a welcome departure from more formal intergovernmental fora. China is currently at a delicate moment in its history, as it seeks to rein in international criticism and project power simultaneously. While Chinese President Xi Jinping has grown weary of criticism, bringing strong delegations to Western-style security fora could be a welcome antidote.