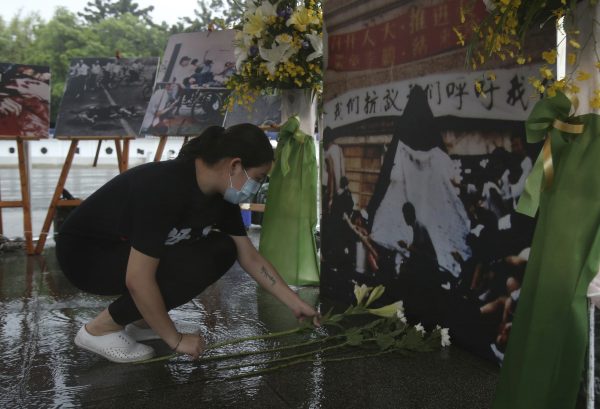 A rally was held on June 4 in Liberty Plaza in Taipei to commemorate the Tiananmen Square protests. This was followed a little over a week later on June 12 by a flag-waving activity culminating in a demonstration outside the Bank of China in downtown Taipei.

June 12, 2019 marked a protest march outside Hong Kong’s Legislative Council that saw the movement’s first major clashes with police. After the extradition bill that had first sparked the protests was withdrawn, the demonstrations shifted to broader calls for universal suffrage.

The June 4th rally has taken place for decades, usually featuring talks from Tiananmen Square survivors and student leaders such as Wang Dan, Wu’er Kaixi, or Zhou Fengsuo. It has now been joined by annual commemorations for the start of the 2019 Hong Kong protests, with overlapping participants taking part in both events.

Rally organizers for both events include key organizations that focus on issues regarding Taiwan and China, as well as rights-focused organizations that are key linchpins of Taiwanese civil society. Examples include the Taiwan Association for Human Rights, Covenants Watch, and other groups.

Other speakers who appeared at both events were pan-Green politicians who entered electoral politics after the 2014 Sunflower Movement, which involved the month-long occupation of the Taiwanese legislature in response to a trade deal with China. This included politicians that serve as city councilors in Taipei, such as Miao Poya, as well as DPP legislators such as former environmental activist Hung Sun-han. These politicians usually appear at the annual Tiananmen Square memorials; they are often also present at annual commemorations of Tibetan Uprising Day in March and other events marked by exile groups in Taiwan.

Both events were among the first public appearances of Taiwanese human rights activist Lee Ming-che since his return to Taiwan after five years of imprisonment in China. It is thought that Lee was arrested in China due to discussing Taiwan’s experiences with democratization to Chinese friends online. He could also have been detained over his work experience in Taiwanese human rights NGOs such as Covenants Watch or in the DPP. Lee made comments to media on the sidelines of the Tiananmen Square commemoration and was one of the speakers at the Hong Kong event, thanking supporters for their advocacy for his freedom over the past years.

The June 4th commemoration saw the unveiling of a three-meter replica of the “Pillar of Shame” in Liberty Plaza, as a response to the dismantling of the sculpture commemorating the Tiananmen Square killings at the University of Hong Kong. The pillar was 3D-printed with the blessing of the original artist, Jens Galschiot, and paid for by crowdfunding. No shipping company was willing to transport the original Pillar of Shame to Taiwan.

More broadly, the removal and dismantling of the Pillar of Shame is seen as another sign of the deterioration of freedoms of speech and assembly in Hong Kong. The city’s longstanding annual commemoration of the Tiananmen Square killings in Victoria Park has been banned since 2020, ostensibly due to the pandemic but the heavy police presence to prevent any rallygoers is widely seen as political repression.

The unveiling of the Pillar of Shame was not without controversy in Taiwan, due to the fact that the Chinese name for the sculpture is along the lines of “Pillar of National Shame.” This raised questions as to Taiwan’s relation with China, in line with rising identity trends that lead many Taiwanese to not view themselves as Chinese. Similarly, in past years some Hong Kong localists had urged Hong Kongers not to commemorate the Tiananmen Square events, viewing the protests and subsequent crackdown as taking place in a foreign land.

Some of the speakers at the June 4th commemoration in Taiwan, particularly those with a background in post-Sunflower Movement activism, responded to such sentiments in their comments, which included criticisms from other pan-Green public figures such as DPP legislator Lin Ching-yi.

At the same time, the replica Pillar of Shame was defaced with black paint on the morning of June 12th by a 19-year-old man surnamed Lee. Lee denied having political motives and his reason for the vandalism remains unclear. Other signs of support for Hong Kong in Taiwan have also resulted in similar attacks. In October 2020, Aegis, a Taipei restaurant that sought to assist Hong Kongers in Taiwan, was invaded by four attackers who spread chicken feces throughout the kitchen. Eggs were thrown at a protest-themed exhibition in the Tainan Theological College and Seminary in December 2020, and in April 2020 Lam Wing-kee was splashed with red paint in a coffee shop.

At both the June 4th and June 12th events, speakers brought up issues facing Hong Kong refugees in Taiwan. In particular, speakers sought to draw attention to the fact that Hong Kongers still do not have any permanent road to residency in Taiwan. As such, Hong Kongers who face political threats at home may be unable to stay in Taiwan if they lose their work, education, or employment status. Speakers noted that some Hong Kongers have already departed Taiwan as a result, traveling to the U.K. or other third countries or even risking a return to Hong Kong.

A residency plan from the Mainland Affairs Council would have allowed Hong Kongers to obtain permanent residency and a Republic of China ID after five years on a work permit if they make twice the minimum wage in their fifth year of residency. But this plan was dropped in late April after backlash from Lin Ching-yi and other pan-Green legislators from the DPP and NPP. Lin and other critics of the plan claimed that the bill would have potentially allowed for Chinese infiltrators to enter Taiwan, posing as Hong Kongers, although her comments were criticized by Hong Kong advocates who pointed out the means that already exist for Hong Kongers to obtain permanent residency in Taiwan.

President Tsai Ing-wen frequently raised the Hong Kong protests in campaigning for 2020 presidential elections, while also promising to carry out measures to assist Hong Kongers. This was used as a way to criticize the KMT, as the historically pro-unification party in Taiwanese politics, in light of Hong Kong’s worsening political outlook. Yet as Hong Kong’s political freedoms have continued to see a downturn in the years since, it is possible that Taiwanese increasingly view Hong Kong as simply being another part of China, and that measures assisting Hong Kongers are now questioned because of the view that Hong Kongers are de facto Chinese nationals.