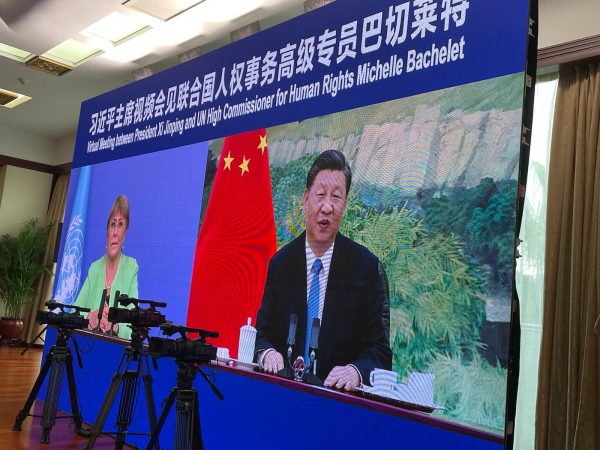 After several years of negotiations with the Chinese government, the United Nations’ human rights chief, Michelle Bachelet, finally made her long-awaited visit to China. The highly organized tour saw her visit two locations in Xinjiang, where Chinese authorities have faced accusations of widespread human rights abuses against the Uyghurs, Kazakhs, and other Turkic Muslims in the region. No journalists were allowed to accompany the visit, but Bachelet did hold a press conference in which she issued a statement highlighting the main outcomes of the trip.

In the global context of the war in Ukraine, a looming food crisis, climate devastation, biodiversity loss, and increasing geopolitical tensions, Bachelet’s six-day visit and statement may appear insignificant. The event, however, is an important milestone for China’s normative power, for the United Nations’ ability to rein in competing human rights narratives, and for understanding the costs involved in engaging China on human rights.

A first key moment came early on. Three days before the press conference, the Chinese Ministry of Foreign Affairs published an early readout of a video call between Bachelet and President Xi Jinping. The readout claimed that Bachelet had admired China’s achievements in “eradicating poverty, protecting human rights, and realizing economic and social development.” Later, Bachelet’s team sought to clarify her remarks, issuing a statement insisting that she had not praised China’s efforts to “protect human rights.” While Chinese Foreign Minister Wang Yi told Bachelet he hoped her visit would help “clarify disinformation” about China’s human rights record, it seemed the two sides did not agree on what that meant.


Despite this initial disagreement, Bachelet’s statement at the press conference at the end of the visit struck a diplomatic tone that provoked widespread criticism from human rights groups. She did express concern about the “lack of independent judicial oversight” in the Xinjiang authorities’ policies, which have, according to numerous reports, led to crimes against humanity that include detaining more than 1 million Uyghurs in camps and subjecting them to torture, sterilization, and forced labor. China denies the accusations, framing the policies as a fight against radicalization and extremism. But that is essentially as far as Bachelet’s criticism went, as she otherwise largely acquiesced to Beijing’s narrative on the need to fight “violent extremism” in Xinjiang.

Beijing’s state propaganda was quick to latch on. A day later, the Global Times was already pointing to Bachelet’s statement as an indication that no human rights abuses were being committed in Xinjiang, and that the accusations were a U.S.-led “farce” and the doing of “anti-China forces” like the World Uyghur Congress. To be sure, blatant evidence of the atrocities committed in Xinjiang exists. The “Xinjiang Police Files,” a database of internal Chinese police files obtained by scholar Adrian Zenz and published during Bachelet’s visit, only added to an already large body of reports, testimonies, and documentation.

Regardless of the visit’s intended purpose, these episodes point to the dangerous tradeoff in engaging China on human rights issues: the endorsement of Beijing’s narratives. In a sense, the visit has given material for the Chinese government to use whenever it is accused of human rights violations in the future.

China’s Influence in the U.N.

The episode demonstrates Beijing’s ability to instrumentalize a U.N. visit. But the visit’s backstory – the non-publication of a report on the situation in Xinjiang – is a sign of China’s ability to shape the behavior of the United Nations altogether.

After knowledge of the human rights violations in Xinjiang became widespread in 2017, the U.N.’s central human rights body, the Office of the High Commissioner, was urged by academics and human rights defenders to issue an investigative report. Bachelet’s office announced it would do so in early 2018. But more than four years later, the report has still not been made public. Last December, Bachelet’s office announced that the report – completed in September 2021 – would be released “in a matter of a few weeks,” but, according to the South China Morning Post, the Chinese government stipulated that the report could only be released after Bachelet’s visit. The report is expected to provide evidence for a “strong condemnation” of the Chinese authorities, but when the evidence gathered will be published is still undetermined.

The non-publication is a sign of China’s increasing clout over the U.N.’s human rights bodies. Since the 1989 crackdown on protesters in Tiananmen Square, the last time it came under intense international scrutiny over human rights, Beijing has carefully learned how to use its voice and influence in the U.N. to advance its human rights interests (namely, its desire to avoid any criticism on the subject). Scholars like Bjorn Ahl, Andrea Worden, and Katrin Kinzelbach have all studied how China promotes a state-centric and anti-U.S. human rights narrative that has gained traction among countries outside the “Global North,” how Beijing has virtually taken-over the Advisory Committee, the Human Rights Council’s think-tank, and how it has generally “facilitated a gradual erosion of human rights standards.”

Highlighting the results of China’s influence campaign, more countries sided with China over the issue of Xinjiang than with its critics in both 2019 and 2021. When in addition, one considers that China chairs an unprecedented four of 15 specialized U.N. agencies and now contributes 12 percent of its overall budget, it is understandable that Chinese pressure is responsible for the long delay in the publication of Bachelet’s report. What is, to some, less understandable even despite her difficult position, is why the U.N.’s human rights chief succumbed to this pressure.

The Willingness to Engage, But at What Cost?

​​For Bachelet, the value of the visit was clear. As she highlighted, her purpose was not to conduct investigative work but rather to hold “direct discussions” on human rights with Chinese leaders and to “explore and pave the way for more regular, meaningful interactions in the future.” However, the critical reaction from Western governments and human rights groups – who even before Bachelet’s statement considered the visit a mistake, given the preventative conditions imposed by China – shows there is no unanimity as to the approach to adopt toward China regarding human rights. A crucial question ensues: Is it worthwhile for international actors to engage China on human rights, or are the costs too great?

Engagement with China has brought it into the international community, made Beijing sign and ratify numerous international human rights treaties, and created a space for dialogue on sensitive issues with a state that is undoubtedly a key stakeholder in global affairs. To give an example, Beijing recently announced the ratification of two international conventions of the International Labor Organization that focus on forbidding forced labor. The ratification of these conventions was an explicit prerequisite set by the EU in the context of the frozen Comprehensive Agreement on Investment negotiated with China. This would not have been possible without a certain level of interaction and dialogue with Chinese counterparts. In addition, when one considers the recent lack of exposure to mainland China for foreigners because of the COVID-19 pandemic, engagement and exchange of the type Bachelet attempted could potentially hold the promise of keeping a channel of positive dialogue alive.

Yet, despite this willingness to engage, the human rights situation on the ground in China has hardly changed. In addition, Bachelet’s visit has accentuated the impression that engagement is more helpful for Beijing’s whitewashing of its human rights record than for encouraging tangible human rights improvements. As such, while engaging China should remain on the table in the hope of a positive outcome, international actors like the U.N. must understand the potential costs. As in the case of Bachelet’s visit, engaging China can have the opposite effect of emboldening its human rights violations.

At the very core, Bachelet’s visit was also about a crucial dichotomy. Human rights, as defined in the Universal Declaration of Human Rights, are indivisible – there are no hierarchies between them – and universal – they apply everywhere to everyone. China advances a different, state-centric narrative, in which human rights are divisible, with economic rights a prerequisite for others, and particular, in that they can only be implemented following a country’s self-stated “national conditions.”

With China rising in confidence as a human rights power, and with the West intent on re-introducing human rights as a core component of international politics, this dichotomy is likely to keep showing up in the U.N., particularly in the work of the High Commissioner’s Office. Bachelet’s visit reflects the current state of the U.N. system, its ability to effect meaningful change, and its role in a global competition between different human rights narratives.