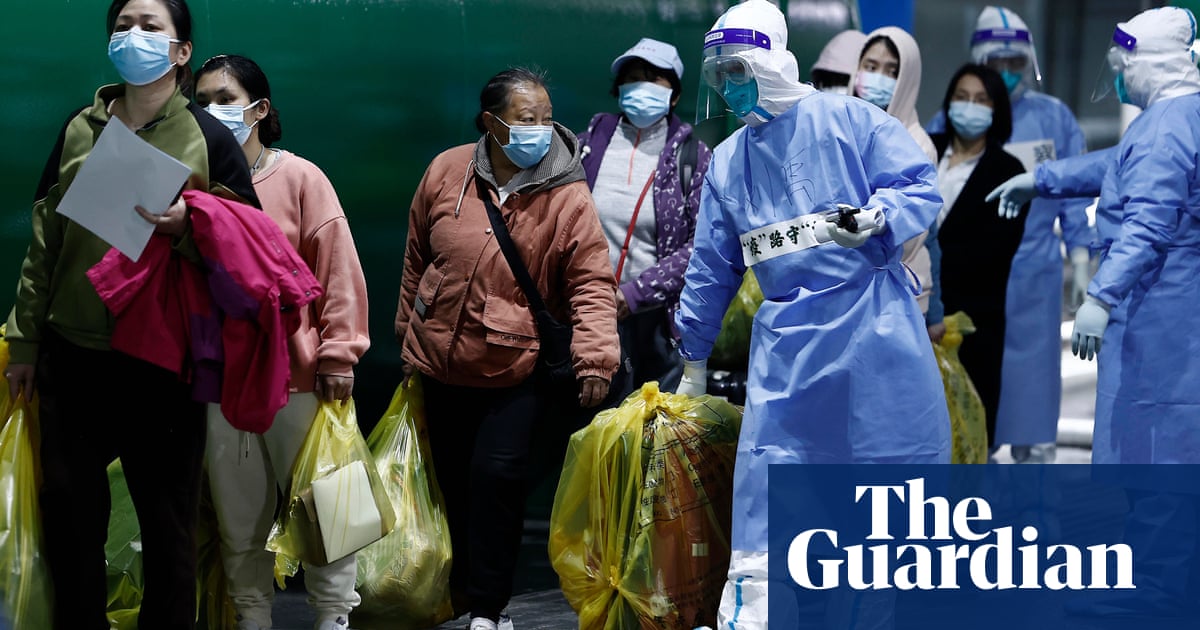 Video footage shared on social media have shown residents of Shanghai scuffling with hazmat-suited police who were forcing them to surrender their homes for coronavirus quarantine facilities, in a sign of rising discontent in the city.

Shanghai, a megacity with a population of 25 million and China’s key financial hub, has been experiencing the country’s biggest outbreak since Covid-19 was first reported in Wuhan over two years ago. The outbreak has prompted criticism of local authorities, and is proving a major test of Beijing’s commitment to its stringent zero-Covid policy.

Residents who have been locked down since late March have complained about food shortages and over-zealous officials forcing them into central quarantine facilities, as authorities rush to construct tens of thousands of beds to house patients with Covid. Daily infections are topping 20,000.

Late on Thursday, multiple videos circulated on social media showing residents outside a compound shouting at ranks of officials holding police shields as the officers tried to break through their line.

In one clip, police appear to make several arrests as the residents accuse them of hitting people. Screaming and crying could also be heard in the background. Bystanders took out their phones to film the scene.

The incident was triggered when authorities ordered 39 households to move from the compound so that patients with Covid could be housed there “in order to meet the needs of epidemic prevention and control”, according to Zhangjiang Group, the developer of the housing complex.

“It’s madness,” one resident in the area told the Guardian. “We’ve never thought this could have happened in Shanghai. Are we no longer China’s window to the world? Aren’t bureaucrats in Shanghai ashamed of what’s been happening in our city in recent weeks?”

Thursday’s incident has provided a rare insight into public anger in China, a country where the authorities brook little dissent and censors routinely wipe information relating to protests from the internet as fast as it is uploaded.

In one live-streamed video, a woman can be heard weeping and asking “why are they taking an old person away?” as officials appeared to put someone into a car. In a separate video, some residents were seen kneeling on the ground begging the police to stop.

Zhangjiang Group said it had compensated the tenants and moved them into other units in the same compound.

In another live-streamed video, a woman is heard shouting: “Zhangjiang Group is trying to turn our compound into a quarantine spot, and allow Covid-positive people to live in our compound.”

The group said it recognised videos of the compound that had appeared on the internet on Thursday and that the situation had now settled down after “some tenants obstructed the construction” of a quarantine fence.

China’s internet censors quickly stepped in to scrub evidence of the clash from Chinese social media sites – as they did with several other videos that have appeared over the last few weeks – with search results for the name of the apartment complex disappearing from Weibo by Friday morning.

Yet, despite the effort to silence discontent online, similar videos are still being shared among citizens. They have also appeared on platforms that are banned by Chinese regulators, such as Twitter and Facebook.

On Friday, Shanghai reported a slight decline in new infections, at over 23,000 cases. The number was down from more than 27,000 the previous day. The large majority of the city is still under a strict lockdown.

In the last few weeks, Shanghai residents have vented their anger on social media about food shortages and heavy-handed controls, including the killing of a pet corgi by a health worker and a now-softened policy of separating infected children from their virus-free parents.

Authorities have vowed the city “would not relax in the slightest”, preparing more than 100 new quarantine facilities to receive every person who tests positive – whether or not they show symptoms.

Agence France-Presse contributed to this report