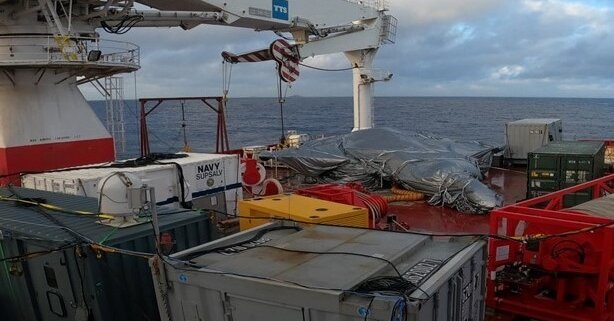 The Navy has recovered a stealthy F-35 warplane that fell into the South China Sea after it crashed while trying to land on a Navy aircraft carrier, the service announced on Thursday.

The Navy’s Japan-based Seventh Fleet said a remote-operated vehicle attached lines to the plane, which was then lifted 12,400 feet to the surface of the ocean and winched aboard the deck of a civilian vessel called the Picasso that the Navy contracted to assist in the operation.

“This deliberate approach resulted in the correct capabilities conducting recovery operations within 37 days of the incident,” Capt. Gareth Healy, the commander of the salvage task force, said in a statement.

“Given the unique challenges of this problem,” he said, “this was an aggressive and achievable timeline.”

The warplane will be taken to a nearby military installation and studied as part of an investigation into the crash and might later be transported back to the United States, the statement said. In recent salvage operations in the region, the Navy has delivered wrecked aircraft to its base in Yokosuka, Japan.

The $94 million jet was operating from the carrier Carl Vinson in the South China Sea on Jan. 24 when it struck the rear of the ship’s approximately 1,100-foot-long flight deck and skidded nearly the entire length of the ship before plunging into the water. The pilot ejected and was recovered from the water before being evacuated to Manila for medical treatment along with two other sailors who were injured in the crash. Four additional sailors who were injured were treated by medical personnel aboard the ship.

The Navy initially said little about the accident publicly, but photos of the F-35 sitting in the water began to appear online. Flight deck video of the crash was later leaked online, spurring an investigation that has resulted in four sailors being charged with releasing the footage, according to the U.S. Naval Institute.