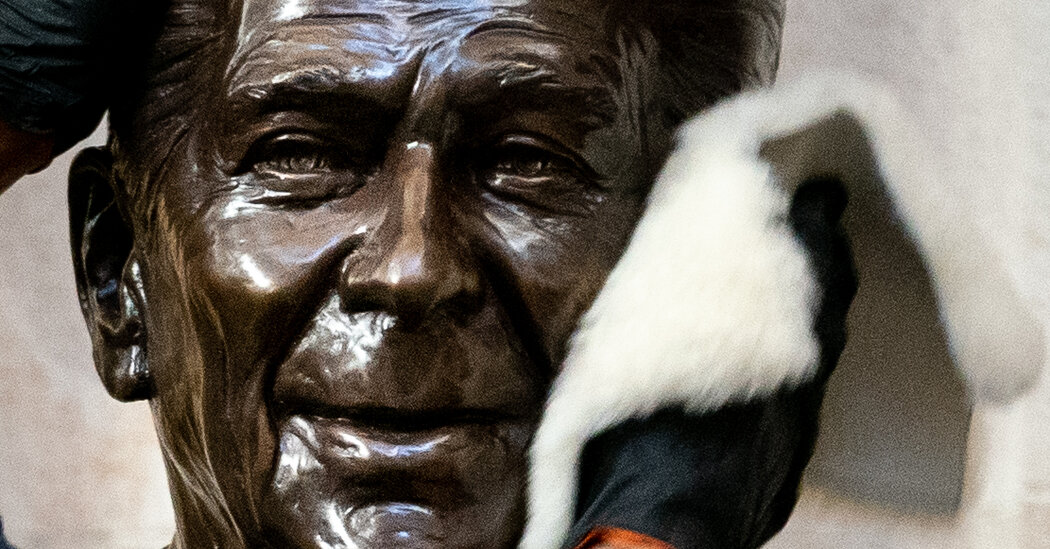 For a long time, longer than I’ve held this job, my advice to Republican politicians and policymakers has been consistent: It isn’t the 1970s or 1980s anymore. The ideas associated with Ronald Reagan’s ascent to power, forged in an era of Cold War and high crime rates, stagflation and sexual revolution, were responses to crises and challenges decades in the past, and the G.O.P. was doomed to cycles of failure until it devised an agenda more fitted to the times.

The year 2021, though, is the first time a reasonable Republican could listen to my pitch and answer, but what if history is repeating itself, and we’re back in Reagan’s world?

First, inflation has returned at last. Since early in the Obama era Republicans have consistently warned that Democratic spending (or the Federal Reserve’s expansion of the money supply) would bring back 1970s-style inflation rates, and time and again those predictions turned out wrong. But the combination of the Biden administration’s oversize burst of stimulus and not-quite-post-Covid supply-chain issues have finally generated real inflationary conditions — not the conspiratorial Shadowstats version but the real thing, the kind that palpably affects prices and paychecks and politics itself.

Second, crime is a major political issue once again. After a horrendous spike in the murder rate last year, the data for 2021 so far shows a much lower increase — but that’s still an increase on top of 2020’s surge, so the overall homicide rate continues to climb. Meanwhile, it’s easy to notice indicators of collapsing public authority that evoke the “no radio” signs that used to adorn New York City cars — from The San Francisco Chronicle tweeting recently that the city’s residents were debating whether to “tolerate burglaries as a part of city living, and focus on barricading homes” to a brazen incident of alleged large-scale shoplifting in Oxford, Conn., not that far from my own home, that became a viral video.

Third, for the first time since the Reagan era, the United States has a true great power rival in China and a zone of Cold War-style brinkmanship around Taiwan. Post-Reagan, Republican hawks were always looking for the next organizing threat for U.S. foreign policy, but their attempt to cast Islamic fundamentalism as a new Red Menace led only to disaster and the evaporation of G.O.P.’s traditional advantage on foreign policy. But the Biden administration’s stumbling withdrawal from Afghanistan (however correct and even gutsy the strategic decision) and the backdrop of growing Chinese power has evoked the Carter era — the Iran hostage crisis, the fear of Soviet expansionism — more than anything that happened under Bill Clinton or Barack Obama.

Finally, the vaulting ambitions of cultural progressivism, the march of activist ideas through elite institutions and public bureaucracies, has given Republicans a chance to regain the culture-war advantages that they lost during the socially liberal years between Bill Clinton’s impeachment and the Supreme Court’s establishment of a right to same-sex marriage. As in the 1970s, the cultural left has lately won a series of victories but then has run way ahead of them, creating a gap between its vanguard ideas and public opinion, and a clear opportunity — just ask Glenn Youngkin — for conservative counterattack.

Of course, history doesn’t really repeat itself so neatly. Both the inflation spike and the murder surge have been mediated by pandemic conditions in ways that make them more likely to recede rapidly than their antecedents in the ’70s and ’80s. (My own suspicion is that the norm of masking in liberal cities has facilitated crime, which is another reason for blue America to seek a more rapid exit from its Covid rules.)

Meanwhile the comparison to Carter-era foreign policy is at the very least inexact — the new Cold War doesn’t look much like the old one, given the murky nature of the ideological confrontation and the uncertain place China occupies in the American imagination, while Biden’s tactical stumble in Afghanistan may well fade from public memory rather than becoming a presidency-defining story like the Iran hostage crisis.

Finally, whatever culture-war advantage the Great Awokening has handed to Republicans, the cultural right still has deep structural weaknesses relative to the Reagan era, given the decline of religious affiliation and family formation since the 1980s and the growth of progressive ideological influence not just in Hollywood or the academy but in Silicon Valley and corporate America writ large. And the aftermath of a Supreme Court decision overturning Roe v. Wade might (depending on the pro-life movement’s response) send the public-opinion pendulum swinging back toward social liberalism.

All of which is to say that Republicans would be foolish to assume, and Democrats wrong to fear, that the dynamics of 2021 will prevail throughout the 2020s, delivering a simple replay of the rise of Reaganism.

But for the electoral landscape of this specific moment, and the politics of 2022, the G.O.P. has advantages unlike any in my pundit’s lifetime — a chance to win, and maybe win big, by eschewing the unpleasant work of adaptation and simply playing those 1980s hits again.