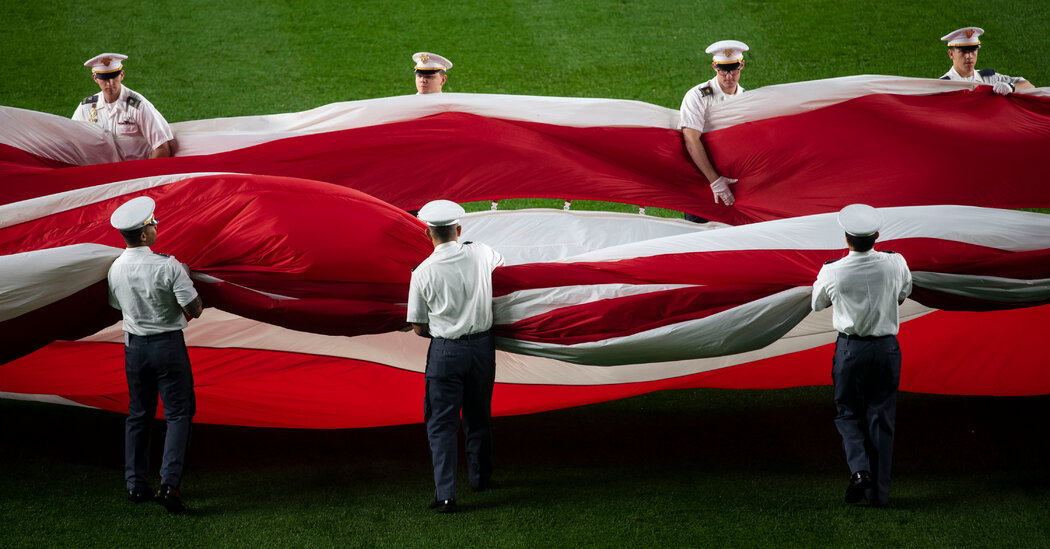 In one of the more arresting videos that circulated after the fall of Kabul, a journalist follows a collection of Taliban fighters into a hangar containing abandoned, disabled U.S. helicopters. Except that the fighters don’t look like our idea of the Taliban: In their gear and guns and helmets (presumably pilfered), they look exactly like the American soldiers their long insurgency defeated.

As someone swiftly pointed out on Twitter, the hangar scene had a strong end-of-the-Roman Empire vibe, with the Taliban fighters standing for the Visigoths or Vandals who adopted bits and pieces of Roman culture even as they overthrew the empire. For a moment it offered a glimpse of what a world after the American imperium might look like: Not the disappearance of all our pomps and works, any more than Roman culture suddenly disappeared in 476 A.D., but a world of people confusedly playacting American-ness in the ruins of our major exports, the military base and the shopping mall.

But the glimpse provided in the video isn’t necessarily a foretaste of true imperial collapse. In other ways, our failure in Afghanistan more closely resembles Roman failures that took place far from Rome itself — the defeats that Roman generals suffered in the Mesopotamian deserts or the German forests, when the empire’s reach outstripped its grasp.

Or at least that’s how I suspect it will be seen in the cold light of hindsight, when some future Edward Gibbon sets out to tell the story of the American imperium in full.

That cold-eyed view, taken from somewhere centuries hence, might describe three American empires, not just one. First there is the inner empire, the continental U.S.A. with its Pacific and Caribbean satellites.

Then there is the outer empire, consisting of the regions that Americans occupied and rebuilt after World War II and placed under our military umbrella: basically, Western Europe and the Pacific Rim.

Finally, there is the American world empire, which exists spiritually wherever our commercial and cultural power reaches, and more practically in our patchwork of client states and military installations. In a way this third empire is our most remarkable achievement. But its vastness inevitably resists a fuller integration, a more direct kind of American control.

Seen from this perspective, the clearest American defeats of our imperial era, first in Southeast Asia in the 1960s and then in the Middle East and Central Asia after 9/11, have followed from the hubristic idea that we could make the world empire a simple extension of the outer empire, making NATO-style arrangements universal and applying the model of post-World War II Japan and Germany to South Vietnam or Iraq or the Hindu Kush.

We have experienced similar failures, with less bloodshed but more significant strategic consequences, in our recent efforts to Americanize potential rivals. Our disastrous development efforts in Russia in the 1990s led to a Putinist reaction, not the German- or Japanese-style relationship we’d imagined. The unwise “Chimerican” special relationship of the last two decades seems to have only smoothed China’s path to becoming a true rival, not a junior partner in a peaceful world order.

Both kinds of failures and their consequences — Russian revanchism and growing Chinese power combined with quagmire in Iraq and defeat in Afghanistan — have meaningfully weakened the American world empire, and extinguished our post-9/11 fantasy of truly dominating the globe.

But so long as we have the other two empires to fall back on, from our cold-eyed Gibbonian perspective the situation still looks more like a scenario where Rome lost frontier wars to Parthia and Germanic tribes simultaneously — a bad but recoverable situation — than like outright imperial collapse.

That said, defeats on distant frontiers can also have consequences closer to the imperial core. The American imperium can’t be toppled by the Taliban. But in our outer empire, in Western Europe and East Asia, perceived U.S. weakness could accelerate developments that genuinely do threaten the American system as it has existed since 1945 — from German-Russian entente to Japanese rearmament to a Chinese invasion of Taiwan.

Inevitably those developments would affect the inner empire, too, where a sense of accelerating imperial decline would bleed into all our domestic arguments, widen our already yawning ideological divides, encourage the feeling of crackup and looming civil war.

Which is why you can think, as I do, that it’s a good thing that we finally ended our futile engagement in Afghanistan and still fear some of the possible consequences of the weakness and incompetence exposed in that retreat.

And applied to the American empire as a whole, this fear points to a hard truth: You might think that our country would be better off without an imperium entirely, but there are very few paths back from empire, back to just being an ordinary nation, that don’t involve a truly wrenching fall.